"Heroes of the Revolution"

A great and well respected sub genre of the Spaghetti Western is the "Zapata" western. Set at the time of the Mexican Revolution, these films were meant as political commentaries often created by very political people. The normal Zapata western features two main characters, a gringo and an ignorant peon, whom the gringo convinces to fight for the revolution. They become heroes of the revolution. A few of these sorts are...

El Chuncho is a simple gunrunner working for revolutionary general Elias. Chuncho only fights for money and women. He has no real passion for the revolution and is rather ignorant of politics. This all changes when he meets a gringo adventurer, Tate. Tate soon convinces Chuncho to fight for the revolution but revolution is not Tate's real agenda.

El Chuncho is the quintessential Zapata western rebel. Ignorant and violent. He soon becomes more and more knowledgeable of the revolution and its politics. After he has had his political awakening, he focuses more on real targets. He liberates a town from the rule of the rich land owner who basically controls the town.

At the end, he kills the gringo for the assassination of his employer, General Elias. Also for Tate's treachery. He used El Chuncho to kill an important figure in the revolution he now cares about. He gives money to a small child, urging him to buy dynamite instead of bread.

Tepepa is a revolutionary hero. But, he has been imprisoned for resisting the former laws of the country which have not been removed as promised. He is freed by an English doctor who wishes to kill him. But this gives him a chance to resume his revolution and fight to regain what they have fought and died for.

Tepepa is not like any other Zapata western peon. He is very political and not ignorant in the ways of the revolution. He is a hero to the peons. He can be noble and inspiring. But he is still a man. The doctor wants to kill him because he raped the doctor's fiancee. Not the actions of a completely noble man. 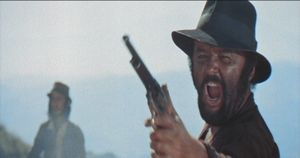 Juan is a simple bandit who robs people on the roads of Mexico with his family, including his sons, and father. He cares nothing of the revolution and only wants money. He soon meets, and befriends an Irish expatriot, John, exiled to Mexico after his activities in the Irish Republican Army are exposed. John basically tricks Juan into becoming a hero in the revolution against Juan's will. However, Juan soon finds himself face to face with the horrors of the government. Now, with motivation, he becomes a willing hero of the revolution.

Juan is really no different than other Mexicans of this genre. Violent and ignorant and greedy. But when human nature comes his way, he realises how ignorant he really is. He does not completely believe in the revolution but knows that it is necessary. He pretty accurately predicts the outcome of the revolution also, because of the nature of Mexico and its more powerful people. He loses everything he has in the revolution and is completely demoralized as a result. The true horrors of war hit him square in the face.

Paco was a peon who worked in a silver mine. Until he leads a revolt against the mine owners. He forms a small rebel gang. He soon meets Sergei Kowalski. A Polish mercenary who offers to structure Paco's gang as well as his own abilities. He makes Paco from a small time bandit into a hero of the revolution.

Paco is also another one of the ignorant peon figures seen in this sub genre. He is ignorant but soon becomes more politically aware. He is unable to see that this gringo is just trying to exploit him and his men for a buck. Paco doesn't notice this at first. But after he starts becoming more and more serious, he sees this and has his friend imprisoned. He is very similar to the character of Chuncho. Ignorant but soon, more mature and idealistic.