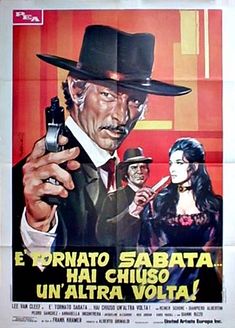 In this spaghetti western, a quick-drawing, hard-riding granite faced, steel-eyed ex-Confederate soldier (Lee Van Cleef) rides into a Texas town with the small travelling circus he works for as a stunt rider and bumps into a man who owes him $5,000. Wanting the money back, the vet decides to stay in town and it isn't long before he ends up embroiled in corruption and double-crosses as he fights to simultaneously save the townsfolk from the greedy, corrupt politician who runs the town and forces the residents to pay cripplingly high taxes and steal the crook's fortune. This is the third Sabata film and the second time Van Cleef essayed the character. In the second film Adios Sabata, the title character was played by Yul Brynner (but only outside of Italy, where the character was originally called Indio Black).

In this cheerful sequel Sabata has again to keep the overview in a town full of swindlers, cheaters and crooks (and of course a few acrobats). Parolini directs elegantly in his own excessive and ornamental tongue-in-cheek style. If anything the film proves that also a SW which was shot solely in Italy could have a lavish look. While most people seem to think about Return of Sabata as an inferior successor, it's still impossible for me to see any difference to Parolini's other Sabata/Sartana style films.