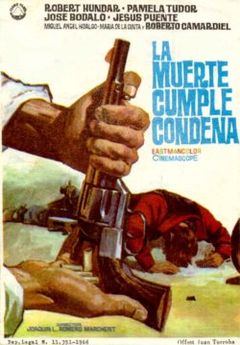 In most countries it was released in 1966 but it's a 1965 production, made simultaneously with For a Few dollars More and Alberto Grimaldi was involved in both productions (*1). It was written by Sergio Donati, who also contributed to the scripts of For a Few Dollars More and Once upon a time in the West. Some elements in the script made have made the trip from one movie to the other, such as a crippled man in a wheelchair, a beautiful widow and a well. 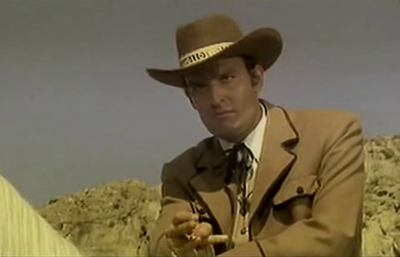 The film opens with a scene set in the desert. After a bank robbery, two men, Frank and Martin, have flown into the desert, but the posse is still on their trail. Frank is severely wounded and asks his partner for help. Instead, Martin grabs the briefcase containing the loot, and rides off. Frank shoots him in the back, then faints. Ten years later (after the credit sequence that is) Martin has become a cripple, riding around in a wheelchair, but he has also become a powerful landowner, who extorts the small farmers in the region with the water he has found on his land, the only well not yet dried up in the desert-like surroundings. One of the farmers, a beautiful young widow, has relapsed into crime: with her two children she robs innocents passers-by (the children ask for help, she hits them on the head). One day a passer-by sees through the trick and from that moment on, all things will be different ...

The script of this movie is quite intricate. It may take viewers a while to piece all things together. At first sight, it looks very much like a comedy version of Shane, with Claudio Undari as the gunslinger coming to the aid of terrorized small farmers. The atmosphere is light-hearted, even cheerful; the widow not only lives with two children, but also with two pigs, one of them a real pig, the other one the ill-mannered uncle Ben, played by Roberto Camardiel (!). The criminal activities of the widow and her children are accompanied by merry tunes of Marcello Giombino's uplifting score. But, as said, when Undari appears, things change. His character, Lassiter, is not a paragon of virtue, but an opportunist who smells money in every possible situation. Martin, the man in the wheelchair, is still looking for the man who crippled him (and at the same time afraid that the other is looking for him), and this guy, Frank, happens to be a former inmate of Lassiter ... 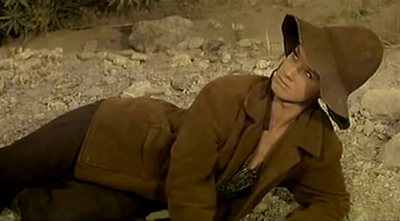 Of course Lassiter redeems himself towards the end of the movie, but his character is closer to No Name than to Shane, and it wouldn't surprise if the original character was changed in order to make the film look more like A Fistful of Dollars. Undari appears rather late for a protagonist, after only 22 minutes, and I even had the strange idea that the entire character was an afterthought. The movie is highly uneven, but it's easy to enjoy and, as usual, Marchent's direction is elegant. If the comedy is occasionally ebullient, some of the violence is quite extreme. The scene in which Luigi Pistilli is shot to pieces, is remarkably graphic for a western produced in 1965 (*2). Some will complain about the children, but I didn't mind them. And if you think they're a nuisance, concentrate on the mother.

Simon Gelten is a long time contributor to the SWDb. "I'm not as old as Tom B. but I'm working on it. I hope to catch up with him by the end of the next decade.", he says. Simon saw all movies by Sergio Leone and several by Sergio Corbucci in cinema, most of the time in Eindhoven, the city where he was born. Currently, Simon is living in Turnhout, Belgium. Simon is active within the database as both Scherpschutter and his alter ego Tiratore Scelto.
Retrieved from "https://www.spaghetti-western.net/index.php?title=100,000_Dollars_for_Lassiter_Review&oldid=131163"
Categories:
Cookies help us deliver our services. By using our services, you agree to our use of cookies.