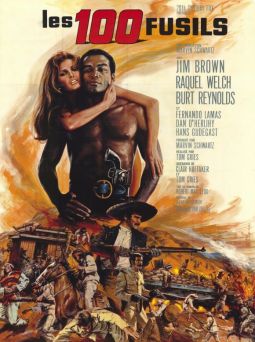 A couple of years ago, 100 Rifles was an almost completely forgotten movie. It was notorious for being the first major Hollywood production to offer an interracial sex scene, but according to critics it was a lousy picture with only few redeeming qualities, such as a scene in which the film’s heroine takes a public shower under a water tank. Like most Hollywood westerns shot in Spain in the late sixties, it has been re-evaluated in recent years, and today it has become a sort of cult movie.

The film is set in the Northern Mexican region of Sonora, at the beginning of the Twentieth Century, against the background of an ethnic cleansing by the Mexican government. The Yaquis are deported because they slow the works on a railroad down; most of them have already been deported to Southern regions (where they were used as slaves), but small groups are continuing to resist subjugation (*1). The story is about a black deputy sheriff from Arizona, who accidentally becomes involved in their rebellion, when he crosses the border with Mexico to capture a half breed Yaqui Indian, who has robbed a bank and bought one hundred rifles with the loot to arm his people. The black American is very reluctant to join the Yaqui in their fight against the federales (to begin with he never liked Indians), but falls for their fiery red-headed leader, played by no other than Raquel Welch.

Although the film has its share of shortcomings, it’s hard to understand why it has been neglected for such a long time. It is fast-paced, offers several well-staged action sequences (notably an assault on a train), and stars three attractive actors, two at the peak of their popularity, the third rising to stardom. Brown seems not particularly interested (like his character, deputy Lyedecker, who’s constantly telling us that the Yaqui rebellion is not his business), but Welch really gives her best as the fiery rebel leader. The part nevertheless seems a bit beyond her as an actress, and it’s Burt Reynolds who easily steals the film as the half breed (his mother was Yaqui, his father from Alabama …). Fernando Lamas is also very good as the sadistic general, entrusted with the assignment to clean the region from Indians. His part basically is an extended cameo, but note that in Spanish the movie is named after his character: El Verdugo !

The historic background suits the movie very well, although the script never gets to the bottom of the conflict. General Verdugo has been given a German advisor, who proposes some radical solutions for the ‘Yaqui problem’ (these hints at extermination seem a little anachronistic), and there’s also a representative of the Southern Pacific Railroad, who’s appalled by Verdugo’s drastic measurements, but still wants the work on the railroad to continue. There are some similarities to Zapata westerns, especially those of Sergio Corbucci. It features a beautiful woman alongside two rivaling macho men - one attached to a cause, the other only to himself – and also uses some familiar locations (notably the station from Compañeros) and faces from Italian westerns, such as Aldo Sambrell and José Manuel Martin (as Welch’s father in the opening scene). But the spaghetti westerns certainly weren’t the only source of inspiration. In one prolonged scene Brown and Reynolds are shackled to each other like Sidney Poitier and Tony Curtis in The Defiant Ones (1958, Stanley Kramer). There are several other hints that the film also tried to say something about racial prejudice, but this aspect is never elaborated. Ironically, racial prejudices seemed to have caused some problems on the set.

According to an article in a French magazine, Brown and Welch didn’t like each other. Welch thought Brown was insupportable and she was pissed off that he was top-billed, Brown thought Welch was prejudiced against black people and had expected him to behave like an Uncle Tom who was prepared to kiss her feet. Welch also had a bad time with her husband, who was on the set, when it came out that she was having an affair with one of the Spanish extras, who was subsequently fired (2). The ‘sex scene’ involving the two, which gave some notoriety to the movie, seems rather tame today, but the other (in)famous moment, Raquel taking a public shower, is still quite spectacular. And so is the movie, in spite of some obvious flaws. The story offers too many cliché situations (a fistfight near a cliff, several narrow escapes etc.), and there are also a few sudden transitions and other anomalies, probably caused by 20th Century Fox' decision to re-edit the material against director Gries and screenwriter Huffakers wishes. But it’s an eventful movie and the action scenes are well-handled and remarkably violent for a western predating The Wild Bunch by a year. Jerry Goldsmith’s rousing score will stay with you for days, and oh yes, before I forget: the film also stars Soledad Miranda and unlike La Welch, she appears nude. This movie certainly is worth watching.

Simon Gelten is a long time contributor to the SWDb. "I'm not as old as Tom B. but I'm working on it. I hope to catch up with him by the end of the next decade.", he says. Simon saw all movies by Sergio Leone and several by Sergio Corbucci in cinema, most of the time in Eindhoven, the city where he was born. Currently, Simon is living in Turnhout, Belgium. Simon is active within the database as both Scherpschutter and his alter ego Tiratore Scelto.
Retrieved from "https://www.spaghetti-western.net/index.php?title=100_Rifles_Review&oldid=140182"
Categories:
Cookies help us deliver our services. By using our services, you agree to our use of cookies.