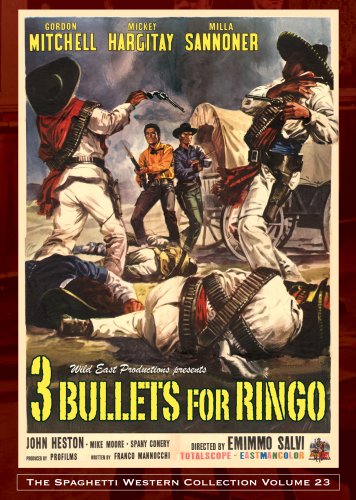 Ringo (Hargitay) is a gun for hire, together with his companero Frank (Mitchell). But they part ways over a girl (Sannoner) who Ringo ends up marrying, and Frank leaves to fight in the civil war. Ringo becomes the sheriff and reunites with his mother, one of three owners of the mine the rich banker Daniels (Staccioli) would like to buy. When the war is over, Frank returns just when Ringo contracts blindness due to a terrible accident. Daniels passes the sheriff's badge to Frank, in exchange for him looking the other way when he does his dirty business to get the land from Ringo's family. Ringo manages to hide the paperwork, so Daniels sends Frank and his other henchmen out to get Ringo, his wife, his son, his mother and.... the paperwork. Too bad for Daniels the blindness is only temporary.....

Comments
A movie that starts out confusing the viewer actually picks up in suspense and the story turns out to be not quite as simplistic as initially thought. What makes the movie especially worth viewing is the at times really good acting and dialogue (props to the dubbing here, too, it's really good), and the production design, which makes for gloomy interiors and claustrophobic settings, probably thanks to the director's usual genre endeavors. The action scenes though are very clumsy, the shooting looks like it is from a 30s American western, and the costumes look just like that, too. But the movie takes good care of details in many parts which enriches the script and lends considerable credibility to the whole story. The music is typical, and sometimes actually really great. Overall, the movie suffers from some cardinal mistakes mostly in the action department, whereas it really scores with interior scenes and dramatic sinister face-offs.

Wild East's presentation of the film is pleasing, yet only in context. There are a number of Mickey Hargitay trailers, the alternative American and German title credits and a very nice picture gallery. The audio is very noisy with lots of crackling, lack of tone and other proof of old age. Same with the picture, which is presented in anamorphic widescreen, yet looks very dark, even in the scenes that take place during daylight (which are only a few). The picture at times looks very faded and overall lacks sharpness. Although the warm tone is certainly intended by a director who used to make sword and sandals movies, the movie would surely make a whole different impression with a cleaner, restored, crisper and richer picture.

Three Bullets for Ringo is a film that will certainly find its fans, especially upon closer observation. I think the film has a hidden charm and many strengths, once you look past some of the amateurish mistakes made. It is an entertaining drama with a gloomy western setting, some very obscure scenes and a huge body count. It is a bit unfortunate that Wild East could not present this film in better quality. The transfer makes the movie look a lot gloomier and older than it really is and the already bad sound design by the filmmakers is underlined by the sub-par audio on this disc. But I applaud Wild East for releasing this film, which I had lots of fun watching, despite its shortcomings. The DVD should most definitely end up in a collector's and a fan's shelf, and is for sure worth watching.

Special thanks to Wild East for providing us with a review disc.