The name Ringo in the title is an indication that we're still in the early days of the spaghetti western. Between Dollar and Django, so to speak. The first magical word in movie titles' relay was 'Dollar', followed by 'Ringo', who would, after a short reign, pass the baton to 'Django'. Needless to say that there's no connection to Duccio Tessari's movies starring Giuliano Gemma. The Ringo of service is Hungarian born Mickey Hargitay, who was discovered during a muscleman revue in New York by his future wife Jayne Mansfield. When Mansfield noticed Hargitay performing, she allegedly told the waiter, "I'll have a steak and that tall man on the left." (*1)

Ringo and his friend Frank (played by that other muscle man, Gordon Mitchell) save the life of a girl kidnapped by Mexican bandits. They both fall in love with her and their friendship is over when she prefers to marry Ringo. The two men meet again after the Civil War: by then Ringo has become the sheriff of a western town while Frank is leading a group of marauders paid by a land grabber to terrorize the region. Sounds like a workable scheme for a straightforward western movie, but instead this oater feels like a grab bag of plot elements: Mexican bandits, Civil War, romance, melodrama and eventually revenge. Some of them work, most others don't and the melodramatic scenes are often laughably bad. At one point Ringo is temporarily blinded and cured by a blow on the head! The jumpy storyline is also a bit difficult to follow, but in the end it all comes down to the three bullets of the Winchester of the original Italian title (*2).

Like that other Ringo-no-Ringo movie, $100,000 for Ringo (starring yet another muscle man, Richard Harrison) this movie feels a little like a western made by film makers who didn't really know how to do it. It has been suggested that an original script for a peplum movie was rewritten to turn the project into a western. It's not impossible. Director Salvi had worked as a production designer and second-unit director on pepla and some scenes are shot on strangely lit sets that look like leftovers from a peplum. There also a veil dance scene that often was an ingredient of peplum movies (especially when they were set in the Orient), but seems totally out of place here. The good things: Hargitay is no actor but he sure looks impressive, especially when he remains immobile, standing in the town street, tall as a building, steady as a rock and Mitchell knows how to play a madman. Staccioli is quite good as a Stengel type of slimy villain. I also liked the early scene with Ringo, Frank and a third person shooting a saloon to pieces (all three of them laughing hysterically). 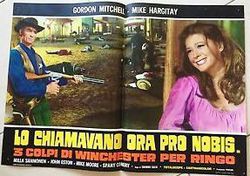 Simon Gelten is a long time contributor to the SWDb. "I'm not as old as Tom B. but I'm working on it. I hope to catch up with him by the end of the next decade.", he says. Simon saw all movies by Sergio Leone and several by Sergio Corbucci in cinema, most of the time in Eindhoven, the city where he was born. Currently, Simon is living in Turnhout, Belgium. Simon is active within the database as both Scherpschutter and his alter ego Tiratore Scelto.
Retrieved from "https://www.spaghetti-western.net/index.php?title=3_Bullets_for_Ringo_Review&oldid=122609"
Category:
Cookies help us deliver our services. By using our services, you agree to our use of cookies.