A Barrel Full of Dollars Review (by J.D.) 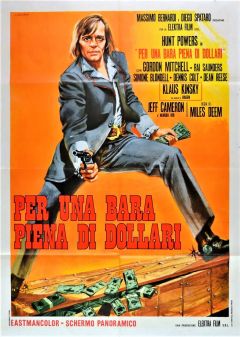 It's been a while since I've reviewed a Demofilo Fidani film. Unlike most bad spaghettis, I usually look forward to them, due the sheer unoriginality and incompetence that goes into them. Needless to say, I was a bit surprised after seeing Fidani's 1971 effort (as "Miles Deem"), A Barrel Full of Dollars. As far as the genre goes, it's a typical watchable but forgettable film, but by Fidani standards, it's pretty damn good. By that, I mean it's not the usual crapfest that Fidani gives us. That, in part goes to the roster of talent he was able to put together for this film. It stars Klaus Kinski, Jeff Cameron, Gordon Mitchell, and Hunt Powers, all genre stalwarts, and it also has Aristide Massaccesi (aka shlock-meister Joe D'Amato) taking care of the camera work. 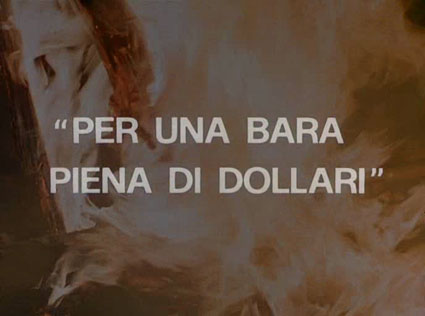 The film starts out with a gang bringing two dead guys back to a hideout, where we first see the bandit Tamayo, unconvincingly played by Fidani regular Hunt Powers, in a particularly bad mustache: 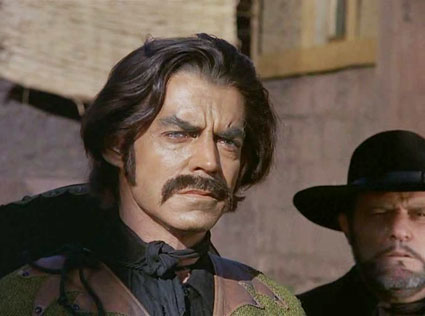 Pretty high Fake Mustache Quotient in this film, courtesy of Hunt Powers. You know what that means.

It turns out the two dead guys are the brothers of the big boss, Hagen, played by Kinski, who comes out, has a fit, and sends Tamayo to go kill the Hamilton brothers, the men responsible. He takes one of the brothers' pocket watches and gives it to Tomayo, who then proceeds to lose it at the scene, where his men kill the Hamiltons. Fidani loves those pocket watches, ever since he saw For A Few Dollars More, as he seems to put them in a lot of his films. Anyways, there's one more Hamilton brother who goes by the name of Nevada Kid (Cameron), who finds the watch, and sets off to track down Tamayo. Meanwhile, Hagen's kidnapped a girl and held her for ransom, who Nevada, along with a guy he meets along the way named John (Gordon Mitchell, also in a bad fake mustache) manages to rescue. 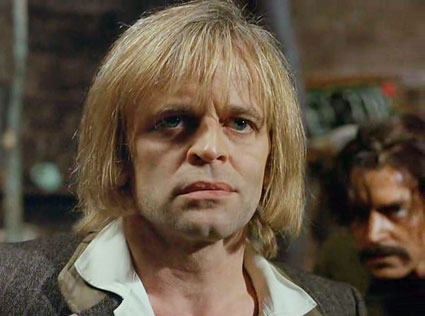 So, Hagen wants his watch back, and goes after Nevada. Eventually the whole thing wraps up in a big shootout (filmed at Mitchell's Cave Canyon studio). The end. Hey, sorry for the brevity, there's not a lot to talk about. 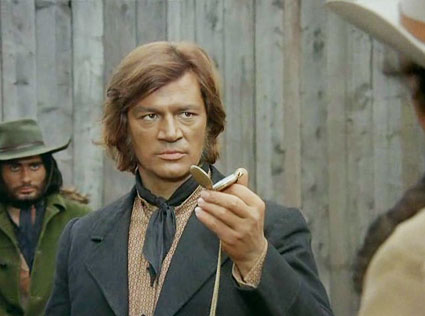 Nevada asks, "How many other spaghettis have you seen this pocket watch gimmick in?"

So, as I said before, it's watchable, and the best Fidani film I've seen so far. Kinski's good, not in "walk on and collect a paycheck mode" but not in "unhinged, overacted over-the-top" mode either. Cameron and Mitchell are okay, considering what they're given, and Hunt Powers is, shall we say, miscast. There is some pretty decent cinematography from Massaccesi, and he doesn't overdo it with the endless super-closeup eye shots like Fidani tends to do sometimes. What's wrong with it? Well, as in all Fidani movies I've seen, the guy knows nothing whatsoever about creating tension in a scene. Several of the gunfights, long as they are, just aren't very exciting. And Hagen's death is about as anti-climactic as it can get. After he repeatedly has John and Nevada pinned down with gunfire from his perch on a steeple, he runs out of ammo, and, in a very stupid move, climbs out, only to be shot in the back, seconds later. Yawn. One other thing, the theme song, "I Know My Love", by someone named Nick Wolf, has got to be one of the worst songs I've heard in a spag (apart from the Keoma and Mannaja themes, of course). Picture your typical spaghetti crooner song, with a bit of rock music... and a singer who sounds like he's so deranged that he's trying to break out of a straight jacket while singing. It's atrocious.

But, by and large, it's still pretty watchable, it just ain't art. As Phil H said over at the SWDB forum, "It's rubbish of course. But quite entertaining rubbish for all that."

Retrieved from "https://www.spaghetti-western.net/index.php?title=A_Barrel_Full_of_Dollars_Review_(by_J.D.)&oldid=134232"
Category:
Cookies help us deliver our services. By using our services, you agree to our use of cookies.