A Bullet For The General BluRay review

My Spagvember continues, with another overdue screening of two BluRay release versions of Damiano Damiani's Quien Sabe? aka A Bullet for the General, also known as "El Cuncho". This text will focus on the US edtion by Blue Underground, whereas in the German translation of this review I will concentrate on the German release by Koch Films. I didn't want to reinvent the wheel so the text builds upon a DVD review I had written years ago (Töte Amigo DVD Review). 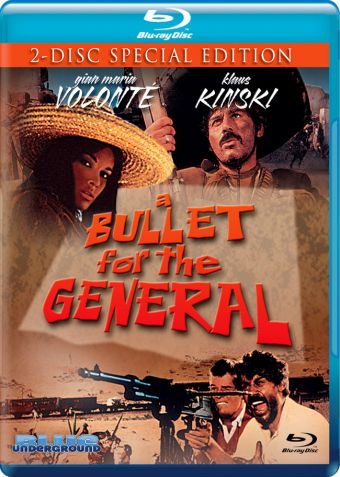 Mexican bandit El Chuncho (expertly played by Gian Maria Volonte), aka the drummer, attacks a train carrying munitions. Also on board is an American, who stops the train, pretends to be a prisoner and henceforth tags along to fight on Chuncho's side, who calls him El Nino (played by Lou Castel), the kid. Chuncho's gang is out on ambushes to capture guns and ammo for the revolution by way of selling them to their General up in the mountains. Also part of the gang are Chuncho's half brother El Santo (Klaus Kinski), a true revoluationary, and Adelita (Martine Beswick). Chuncho and the Kid become good friends, but the American's ambitions and the aimless character of the simple minded Chuncho are about to create a rift in the gang. Chuncho is really just a bandit, out to capture and sell guns, but that also makes him a hero of the revolution in the eyes of many. Ultimately, him and The Kid make it into the mountains where Chuncho can sell his arms, but finds out at what cost to the things he believes in - and it turns out the American isn't who he pretended to be....

Quien Sabe? as the movie is originally called very fittingly, is a masterpiece of the so-called revolutionary spaghetti western. Damiani, like Sergio Corbucci, captured the proper zeitgeist and made a movie to the tune of the Vietnam war and the student protests of its time that's one of many political westerns of its time, but is metaphorically and narratively much better packaged than most. LIke Corbucci he puts his money on two protagonists that are symbols for different ideas (and ideals) and lets them interact during the Mexican revolution. Chuncho is the simple brute, the uneducated peasant revolutionary, El Nino is the educated Yankee, the capitalist and - if you spin it further - the colonialist and interventionist, in the movie's parallels to the Vietnam war.

Damiani does a great job at letting his actors unfold their characters: Volonte delivers his arguably second best performance in a spaghetti western and Castel, in my humble opinion, hasn't shown this much skill in any other spaghetti western. The movie benefits from an ample budget too, its scenes being elaborately put in scene and captured beautifully. Bacalov's and Morricone's (hard to tell which) music do their part in giving the movie its epic look and feel. And it works in a great way. Quien Sabe is an enchanting revolutionary epic, which feels less drawn out than some of Corbucci's endeavors into the subgenre, and doesn't bore even the toughest bred western fan with unnecessary proto-socialist messaging.

Damiani succeeds at conveying his core messages in a stylistic way and tells a great movie doing it. It's one of the most popular spaghetti westerns for a reason and you can find it in most top 10 or 20 lists by fans and experts alike. The movie is what you might call the A league of spaghetti westerns, a suspensful film, a well made film, and also a deep film. When the moment comes and it finally hits Chuncho, during that famous scene at the train station, Morricone's music will certainly put tears in the eyes of cineastes. Quien Sabe, says Chuncho, who knows, behind the touch sounding "A Bullet for the General" you may find one of the most important films of its genre, which finds an even wider audience now thanks to its universal availability in home cinema.

So much for my thoughts as I wrote them years ago. And I have to say: the movie still has that impact on me. Granted, a few badly aged action sequences and some overly comedic elements gnaw at the seriousness of its topic, but the movie is a dead serious parable on the revolution and an extremely deep character study in spaghetti western terms. Chuncho doesn't say "who knows" because he is dumb, but because he stands for a people that had become involuntary plaything to bigger interests, of which he has no way of wrapping his head around. He is a driven person, and more specifically, one driven into a corner. His simple character makes him the perfect tool for all sides, but what is it that he wants? What are his ideals? In the end, when it dawns on him that he had been used by everyone all along, especially his friend The Kid, it is a terrible realization that he makes: he can either accept his fate, or draw the most brutal of conclusions even though its repercussions are beyong his comprehension. He opts for the latter, and runs into the sunset. And Ennio Morricone's emotional musical motif turns it into a moment to beautiful one could cry tears of joy. A grand moment of cinema history.

The BluRay disc starts with a prompt whether you want to watch the US theatrical version (115 Minutes) released as "A Bullet for the General" or the international version (118 Minutes), the latter also being the basis for the German BluRay which I used to review also the German version of this text for. The credits are in both cases English but the film's title is shown as "El Cucho - Quien Sabe". It goges without saying that there isn't a good reason to watch the US theatrical cut. When you make that selection however you get subtitles options in English, French and Spanish. Extras are a 5-min Interview with Damiani, trailers and a photo gallery. The US theatrical cut is noticeably different from the very first minute, including voice over and a less elaborate opening credits sequence. I think this is the version that was originally released on DVD by Anchor Bay. The image looks absolutely solid, but a strong level of DNR makes the transfer lack detail and sharpness especially in out of focus areas of the image. All in all a decent transfer.

When selecting the international version, your audio options change and you get DTS-HD mono tracks for both English and Italian, and just an English subtitle track for the Italian choice. The DNR is present here as well, in parts it seems a bit heavier even, but there is not all that much noticeable difference in picture quality between the two versions. The cuts all in all are not many, some do away with political nuance, some with violence, but it is the longer, integral cut that should be preferred by fans. All in all, it is a solid presentation, but there aren't many extras on this disc (it is also missing the interview with Lou Castel that the German disc includes - which, by the way, offers a choice of both English dubs, the older and the newer one). The discs' audio won't blow anyone away, the Italian track sounds slightly better but you'll be fine with the English dub. The effects especially are a bit of a bummer in this movie.

Almost as if to make up for that, the version I have comes with a second disc, a DVD, which includes "Gian Maria Volonte - Un Attore contro". The 112 minute documentary is presented at rather bad picture quality, which suffers extra from PAL-NTSC conversion, but is likely not available anywhere else for English-speaking audiences. This is a very interesting extra and a main reason to get this edition. Volonte was an extraordinary actor and a towering figure in Italian cinema. An absolute must see in that sense, even though Quien Sabe might not even count among his greatest achievements, which likely fall under his more politically pronounced collaborations with Elio Petri.

The BluRay was provided to us by Blue Underground. Screenshots courtesy of BluRay.com

Retrieved from "https://www.spaghetti-western.net/index.php?title=A_Bullet_For_The_General_BluRay_review&oldid=123671"
Category:
Cookies help us deliver our services. By using our services, you agree to our use of cookies.