A Fan Remembers the Maestro: The Ennio Morricone Concert at Radio City, 2007

by Fred Blosser, author of Sons of Ringo: The Great Spaghetti Western Heroes

Sad news that the magnificent Ennio Morricone died today (as I write), July 6, 2020, at age 91. Morricone’s music has been an indelible part of my movie-going life since 1968, when I first saw The Good, the Bad and the Ugly. Over the years I’ve indulged my enjoyment of his music by buying his film scores on LP, cassette tape, and CD. The first was the soundtrack for The Good, the Bad, and the Ugly on United Artists Records in 1970, followed by the United Artists LP release of A Fistful of Dollars. In the LP days, many that I bought were overseas pressings of Morricone soundtracks that never appeared in the U.S., such as The Great Silence, A Pistol for Ringo/The Return of Ringo, and Un genio, due compari, un pollo. I imagine many other enthusiasts can say the same.

In those days before home video and streaming services (as difficult as it may be for younger audiences to comprehend), you didn’t have immediate access to a favorite movie. A film played in a theater and then showed up years later on TV or, for those in larger cities, for a one-and-done encore at a repertory house. The soundtrack album was the next-best option for recapturing your memories of a given picture.

In those early years of collecting Morricone’s music, I never expected to see the maestro in person. But eventually I did, when he performed a selection of his themes in a concert on the night of February 3, 2007, at New York’s Radio City Music Hall -- his first-ever appearance in the States. 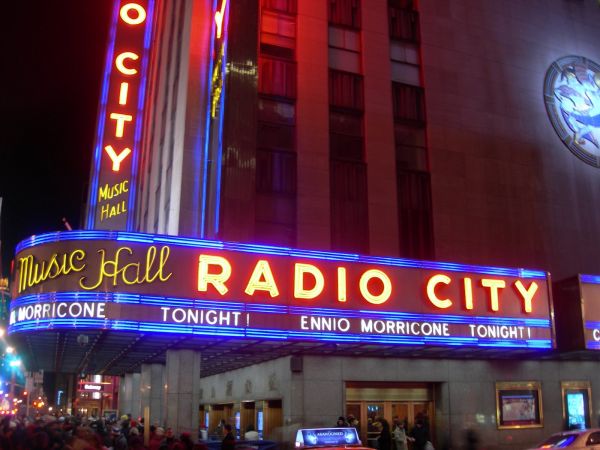 I drove up from Virginia and discovered that my reserved seat could hardly have been better -- eight rows from the stage, in direct line with Maestro Morricone, and an unobstructed view. Morricone conducted the Roma Sinfonietta, with choral vocalizations by the Canticum Novum Singers, admirably substituting for Morricone’s go-to ensemble of Allessandro Alessandroni’s Cantori Moderni, and solo arias by Susanna Rigacci, who bravely and ably covered Edda Dell’Orso’s original vocalizations.

Consider, in 2007, this was a man whose scores I'd enjoyed for almost 40 years. The centerpiece of the concert was a suite of themes from three Sergio Leone epics. From The Good, the Bad, and the Ugly: the title theme and “The Ecstasy of Gold.” From Once Upon a Time in the West and Duck, You Sucker!, alias A Fistful of Dynamite: the respective title themes.

Of interest to crime movie fans, Morricone also conducted three tunes from Once Upon a Time in America, the title theme from The Untouchables, and the title track of The Sicilian Clan, another longtime favorite from the time that I saw the 1970 Henri Veneuil movie starring Jean Gabin, Alain Delon, and Lino Ventura during my college days.

The next day after the concert, the New York Times ran a middling review that made, I reluctantly would have to agree, some valid points. The concert was relatively short, a little over two hours, including three encores that repeated The Ecstasy of Gold and two other tunes that the orchestra and chorus had already performed. The producers missed a chance to add another dimension by not using a multi-media format in which relevant movie clips would have been projected onto a back screen. However, given the presumably limited time that Morricone was available to help plan and rehearse the concert, such a production might have been impossible to carry out. And as for the length of the performance, it was two hours-plus of Morricone on stage, a daunting display of stamina for anybody and particularly for one nearing 80.

As a matter of personal taste, I would have discarded some of the music in the playlist (Malena, The Mission, Cinema Paradiso) and substituted the themes from The Big Gundown, Face to Face, “The Wild Bunch” and “Jack Beauregard” from My Name Is Nobody, “The Man with a Harmonica” from Once Upon a Time in the West, the theme from another Veneuil crime film, The Burglars, and the title track from The Five Man Army. And of course, representative music from A Fistful of Dollars and For a Few Dollars More. However, I imagine that Morricone considered his early compositions to be minor compared with those for "prestigious" productions like The Mission, whatever my own tastes. 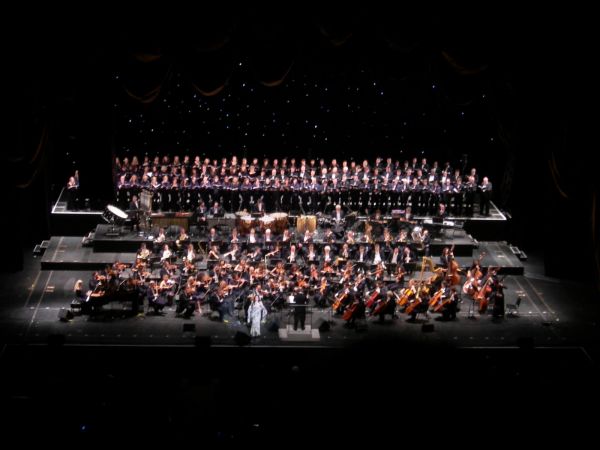 But all Morricone fans have their own favorites, and it’s a minor quibble when one considers that this man was one of the great popular composers of the past 50 years, who with his friend Leone created movies that continue to have a profound influence on film culture. To see him in person, conducting music that reverberates in this country's vast collective unconscious, was grand.

I only regret that I didn't plan ahead a bit better. After the concert ended and the crowd began to file out, I looked back and noticed that Morricone was standing on one side of the stage, speaking to some folks below. By the time I made my way through the crowd, he had gone backstage. I hung around for a few minutes, suspecting that with some persistence and polite wheedling, I might have a chance of talking my way backstage to offer my compliments to the Maestro in person, at least. But the hour was late, time was growing short, and my wife was waiting elsewhere, so I gave up the idea.

I still regret that I didn’t sprint up front faster after the concert, with a chance to say “bravo,” before Morricone went backstage. If The Other Side exists as the faithful believe, then maybe some day I’ll have a chance to meet the Maestro and make up for my tardiness.

Image top right: Cover of the 2007 concert souvenir programme, theater front and birdseye view via this blog. An earlier version of this text appeared here. You can find a review of this concert also on the New York Times

Retrieved from "https://www.spaghetti-western.net/index.php?title=A_Fan_Remembers_the_Maestro:_The_Ennio_Morricone_Concert_at_Radio_City,_2007&oldid=116122"
Categories:
Cookies help us deliver our services. By using our services, you agree to our use of cookies.