A Fistful of Dollars Film Review 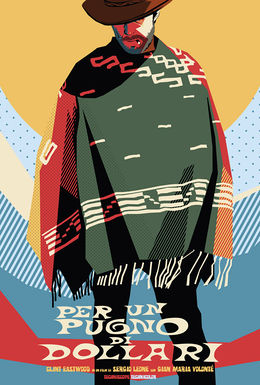 A Stranger in Town

A stranger rides his mule into a Mexican town called San Miguel, where everybody's either rich or dead. He is told, by the local bartender, that the town has been taken over by two families, The Baxters and the Rojos, who smuggle liquor and guns. "Two bosses," the stranger mumbles, "The Baxters on one side, the Rojos on the other. Interesting. Which one of the two families is stronger?" The answer is: "The Rojos, especially Ramon."

Most people know that A Fistful of Dollars was a rewriting, in western form, of Akira Kurosawa’s Yojimbo (1961). Some are also aware of the fact that Kurosawa’s movie goes back on a classic American novel, Red Harvest, about a nameless man, called the Continental Op (he's an operative for a detective agency) written by Dashiell Hammett. Just read the novel’s synopsis on the Dashiel Hammett website:

"The small northwestern mining town of Personville has been taken over by gangsters, lock stock and barrel. (...) The Continental Op systematically turns faction against faction, and they obligingly begin to wipe each other out. As the bloodbath escalates, he discovers to his own horror that he’s actually enjoying the carnage." (*1)

Red Harvest was published in 1929, the year of the great Wall Street Crash. Hammett had marxist sympathies and The Continental Op is the proverbial last man standing after capitalist forces have devoured each other. Kurosawa transferred the story to Japan at the brink of modern times: fire arms have been introduced and many samurai, no longer needed, have become ronin, wandering samurai without a master.

Another place, another time

Sergio Leone brought the story back to where it was originally set, but transported it to another time and place: the American-Mexican border, shortly after the Civil War. Furthermore he turned Kurosawa’s ronin into an adventurer and opportunist. The stranger is a passer by, but he immediately senses that money can be made in a town like San Miguel. He offers his services this moment to the Rojos, and the next moment to the Baxters, in the hope to play them off against each other. The Rojos on one side, the Baxters on the other, and the stranger in the middle ... Like Silvanito has told him, the Rojos are the stronger of the two, but the stranger soon discovers that even Ramon has a weak point: he is madly in love with the beautiful young woman from the opening scene, the boy's mother, but she won't have him ...

Looking for an actor

According to Leone there was no way to make a western without an American leading man. He thought of Henry Fonda, Charles Bronson or James Coburn, and sent all of them a rough copy of the script. Only Coburn showed some interest, but asked too much money. Leone then thought of Richard Harrison, an actor and muscle man living in Rome, but Harrison chose to do a peplum movie instead. An Italian employee of the William Morris agency in Rome, Claudia Sartori, contacted Jolly Films with the message that she had seen an episode of the series Rawhide on television, and had been impressed by a young and tall actor, called Clint Eastwood, who could interest Mr. Leone. Clint's name was put on a shortlist that was shown to Harrison, who advised the production company to hire Eastwood, because he could ride a horse. Leone watched another episode of Rawhide - Incident of the Black Sheep - and the rest is history (*2).

A Fistful of Dollars was filmed between April and June 1964, on a tiny budget of no more than $ 200,000. The bulk of the movie was shot in Spain, in the Almeria province and Hoyo the Manzanares and Colmenar Viejo, close to Madrid. The indoor scenes were shot in the Roman Elios Studios (*3). Clint used the holster and gun from his Rawhide days and also made changes to the script: it was very talky, and Clint thought it was better to turn No Name into a taciturn person. The original script, by Duccio Tessari and Ferdinando Di Leo, 358 pages long, had three different titles: Il Magnifico Straniero, Sputafuoco Joe and Texas Joe. The first title would become the working title, but was later changed into Per un pugno di dollari (*4). The stubby beard and the cigar were Sergio's ideas, but the two men disagreed about the poncho: Sergio said he wanted to make the slender actor look a bit wider in the shoulders, and thought a poncho would help, Clint has always sustained that he bought it in Mexico, on his way to Europe.

The script was almost a scene-for-scene rewriting of Yojimbo, but a couple of things had to be changed. In the Japanese movie the main villain has a handgun (a symbol of the perverted new world) and the hero outsmarts him by throwing a knife at his shooting hand. Leone and his screenwriters decided to turn this scene into a clash between a rifle and a handgun. The most formidable villain in the movie, Ramon Rojo, thinks a man with a rifle will always beat a man with a gun. It would lead to this classic finale, in which the stranger gives Ramon a fair change (after he has killed all his men!) to say if it's true that the man with the rifle always wins.

Hollywood westerns had above all been morality tales (*5), allegorical tales about the making of a nation and man’s place in society, but in the Mediterranean culture Leone was part of, a person’s loyalty was not towards community or society, but to his family and clan. Society and those who represent it (lawmen, clergymen, dignitaries) are usually presented as negative forces in Sergio Leone’s West: when they're powerful, they’re corrupt, when they’re kindhearted they’re weak.

I remember a french poster on which the movie was typified as 'le western qui a boulerversé tous les westerns’: the western that turned all westerns upside down. A Fistful of Dollars was not the first European, or even the first Italian western, but it was the western that changed everything. The electrifying score by Ennio Morricone, the cynical behavior of the hero, or antihero, the magnificent artistic design by Carlo Simi - it was all new, different from what audiences expected from a western. Kevin Grant calls it the first Italianate western: Leone reduced the the canons of the American western to their mythical essence and used his own cultural heritage as a reference point (*6).

Leone’s West is imbued with visual and formal references to a the catholic, family-dominated world he was part of: No Name enters San Miguel on a mule, Marisol is modeled after the Madonna, The two warring factions are family-dominated crime rings, the Baxter family is mother-dominated while the Rojo-clan is run by three brothers (*8). Note also that Ramon, the most powerful of the three, seems to be the youngest: he has passed over his two older brothers to become the head of the family, a narrative device also used in The Godfather to underline Michael Corleone’s evil magnificence.

The poster was created by Diego Tripodi, used with permission.

Simon Gelten is a long time contributor to the SWDb. "I'm not as old as Tom B. but I'm working on it. I hope to catch up with him by the end of the next decade.", he says. Simon saw all movies by Sergio Leone and several by Sergio Corbucci in cinema, most of the time in Eindhoven, the city where he was born. Currently, Simon is living in Turnhout, Belgium. Simon is active within the database as both Scherpschutter and his alter ego Tiratore Scelto.
Retrieved from "https://www.spaghetti-western.net/index.php?title=A_Fistful_of_Dollars_Film_Review&oldid=111618"
Category:
Cookies help us deliver our services. By using our services, you agree to our use of cookies.