I was first introduced to the spaghetti western through my father who loved the Dollars trilogy and declared The Good, the Bad and The Ugly as his favorite western of all time. As for my mother she referred to spaghetti westerns as having annoying music and would always say about the actors- “it’s not even their real bloody voices”. This was a reference to the dubbing, of course. The first three Leone westerns were played late at night quite frequently on Scottish television when I was a boy despite the channel being pretty boring. I am old enough to remember when late at night a priest would come on to preach and say goodnight to viewers. I vividly remember being 11 years old and bedridden with shingles when STV (Scottish Television) played the three films every Saturday consecutively. Sadly, I missed Fistful as I was very sick and delirious but managed to record For a Few Dollars More and The Good, The Bad and The Ugly on VHS. It was safe to say that I was hooked after that. 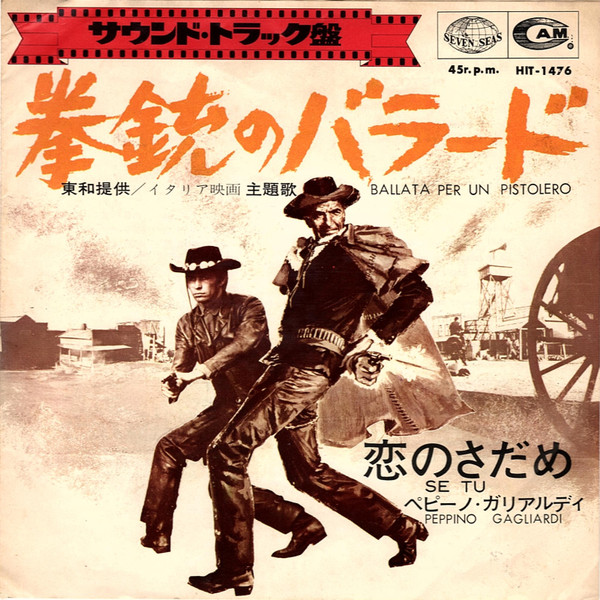 As a university student in my early 20s studying Film and Media, I came across the SWDb online and it really opened up my eyes to what was available outside of the sparse US/UK legitimate releases and third generation copies from bootleggers who took a month to send you the disc. What did catch my eye on the SWDb was the now sadly defunct Macaroni Western Bible series on DVD from Japan which were not perfect but released many great titles. Some of them even had Italian audio with English subtitles. Well, dubtitles to be exact but it was still amazing to watch the Italian language versions (also dubbed) and sometimes hear some of the Italian actors’ real voices such as Gian Maria Volonte who had a very distinctive tone. 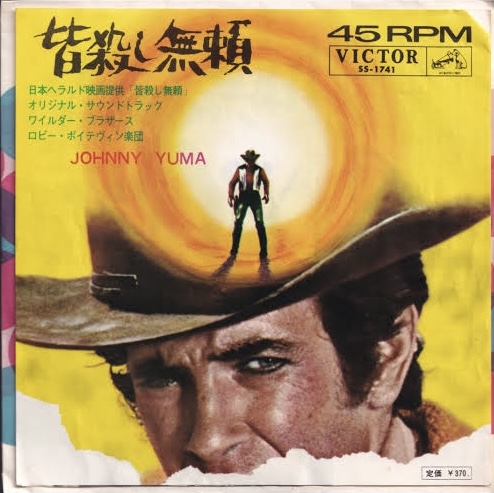 The price to get these imported from Japan to Scotland was just too much at that time but luck was on my side because a Japanese friend of mine in university went back to Japan and would regularly send me individual discs from the Macaroni Western Bible series as a present. This was great as I got to see films like Face to Face, A Bullet for the General, Day of Anger, and A Pistol for Ringo and its ‘sequel’ before they were properly released in The UK years later. 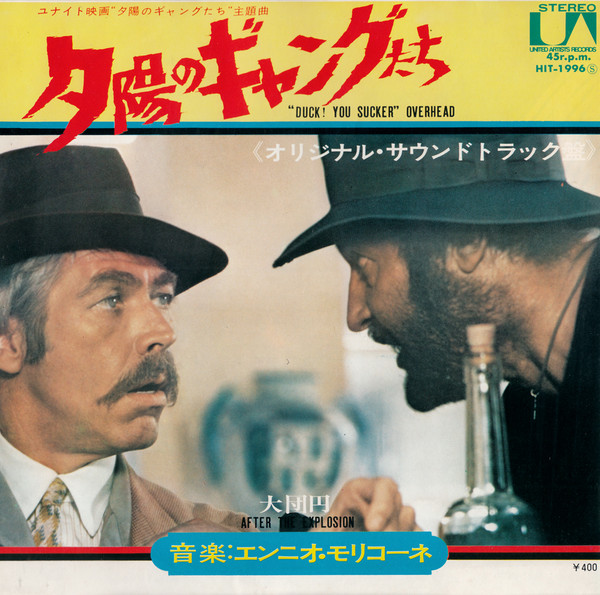 Fast forward to 2005 and I end up living and working in Japan. This was my plan from the start as I had a passion for Japanese food, alcohol and movies. However, my appetite for spaghetti westerns was still alive and getting bigger. When I got my first paycheck I bought a couple of the pricey boxsets put out by Macaroni Western Bible and was as happy as a pig in mud. I also started to frequent second hand stores as they would sometimes have spaghetti western DVDs on their shelves in mint condition and reasonably priced. 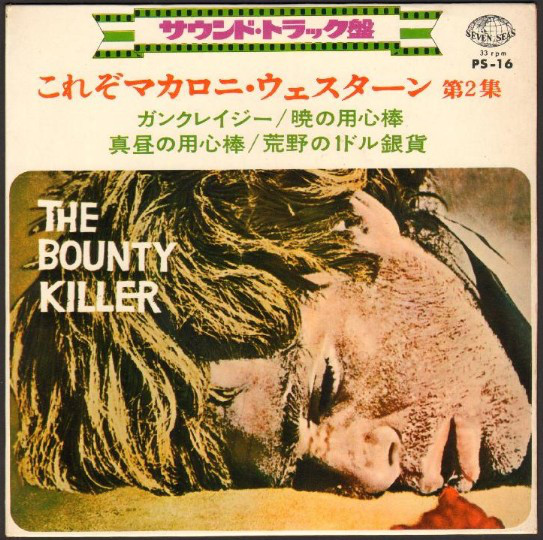 On one trip to a second hand store I had a look through some old LPs which consisted of endless stuff from Abba and The Bay City rollers mixed in with Godzilla Laserdiscs. My idea was to see if there was stuff worth buying to sell online as many collectors go crazy for Japanese versions of any media. Almost giving up and choking from the dust coming from these boxes of LPs, I reached up to the top shelf where the 7 inch singles were kept. After flicking through dozens of Boney M singles and suffering from a very sore shoulder, I frustratingly stuck my fingers halfway through the pile and that is when I came across a soundtrack single for A Fistful of Dollars. I was stopped in my tracks when I saw this beautiful looking cover with Japanese writing above the image of Clint and a rifle touting Ramon. At that time, my Japanese language skills were not so good so this was a new motivation to really start studying the lingo. I must add that translations of spaghetti western film titles from Japanese are actually worthy of an essay, in my opinion. 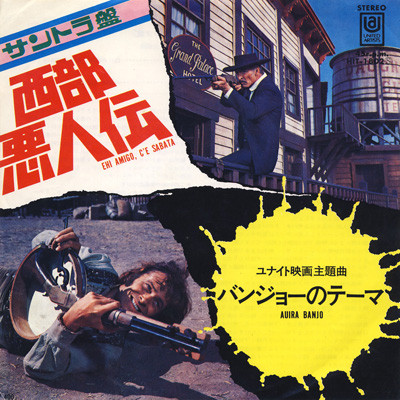 Taking this one tatty record to the counter to pay a ridiculously cheap price of 50 yen (about 44 cents) I realized how the hell was I going to play the record? I didn’t even own a player. I had a look around in the shop and found a 1970s portable player designed for seven inches only. Perfect. I still own that player now 16 years later. The old man at the counter started a conversation about spaghetti westerns which he of course referred to as `macaroni westerns` as this particular phrase was coined by the Japanese. Obviously wanting more money in his register he informed me the shop had other stuff like the record I bought. 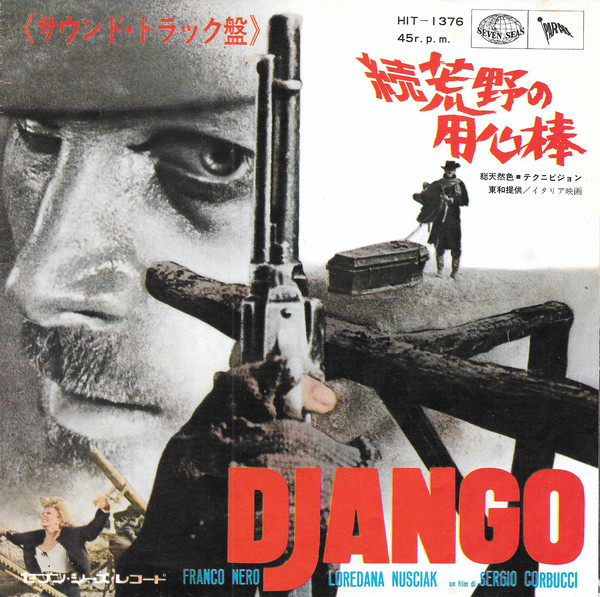 I asked permission to take a bunch from the shelf so I could easily look through them without getting frozen shoulder again and I couldn’t believe my eyes -which the dust had now made its way into. The next single facing me was Django by Luis Bacalov with its beautiful Japanese artwork front and back featuring a coffin dragging Franco Nero. At that time, I thought it surely cannot get anymore rare than this… How wrong I was when I saw the eyes of Mark Damon peeping out at me. Johnny Yuma! I owned a bargain basement American DVD of the film so it was not really something I expected to find on vinyl in Japan. 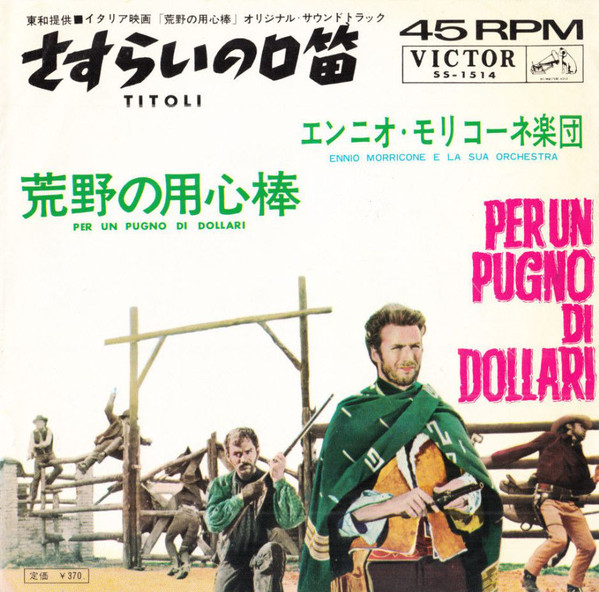 I could feel this was the start of a new hobby and passion as I rushed home to clean and play these records that were actually older than me. Sticking on Django first, I almost spat out my beer when the Italian language version burst in by Roberto Fia. What about old Rocky Roberts dollar shop Elvis impersonation? His English version was even on the Italian language print of the film so what was the Italian version doing on a Japanese record? I would later learn that this Italian version was the ONLY one that appeared on various Japanese LP spaghetti compilations. I even own a lounge jazz version of Django done on saxophone which features on the tail end of a 5 track Morricone compilation on seven inch. 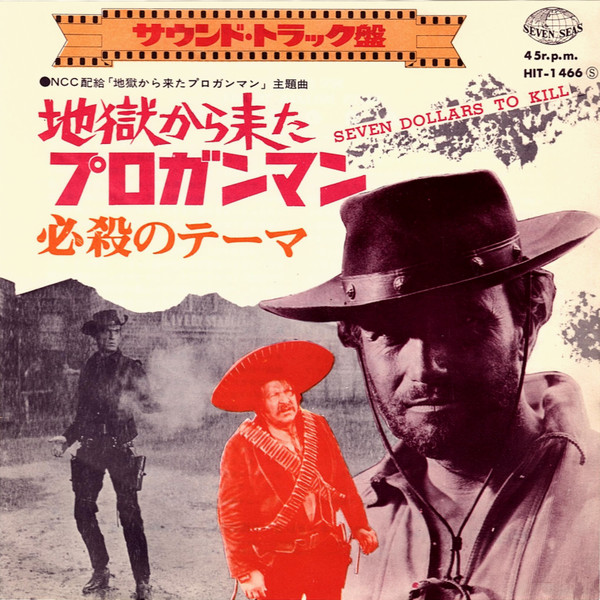 I had to have more of these singles (which we refer to as 45s due the speed the record is played) but how many exactly of these were floating about in Japan? I didn’t know if there was just a fistful available or even hundreds of them- just like the spaghetti western genre itself. Scouting record shops in my city it felt like when you were a child and you found a coin in the street then another and another that some poor drunk guy dropped on the way home. Discovering a load of 45s stuffed in a very inconvenient place of the shop with the label `soundtracks 45RPM` taped on the shelf and a guy behind the counter not looking at me but directly saying to me “nobody buys that stuff”, I came across two absolute crackers again. Massacre Time by Sergio Endrigo and My Name is Shanghai Joe by Bruno Nicolai. The latter having amazing artwork of Joe doing a flying kick into a cowboy on a horse. The now pricey Japanese LP also shares the same image. 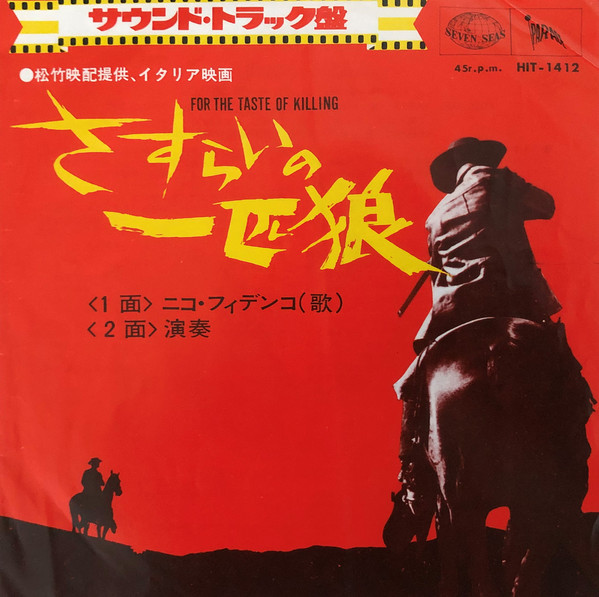 When the shops ran dry I moved onto using online auctions in Japan but this involved being able to read the language which I was more than willing to study as I already decided by then I would stay in the country and start a new life. The auctions were really an eye opener as they not only had lots of new 45s for me to bid on/buy but it seemed the average Japanese customer had little or no interest in these items which eradicated competition. Outside of the Leone/Morricone collaborations I came across such gems as The Return of Ringo, Sabata, Stranger in Town, A Taste of Killing, Arizona Colt, The Mercenary, The Big Gundown, Day of Anger, Some Dollars for Django, Texas Adios, The Bounty Killer, and Blood For a Silver Dollar. 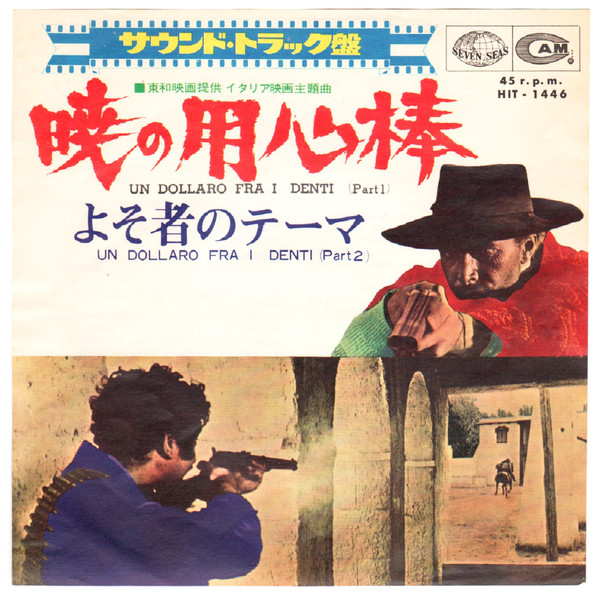 Some of these singles also featured soundbites from the films. I had heard this before on Bruce Lee soundtracks in Japan but they used the English dubbed samples. With the spaghetti stuff it was almost always Italian language. You can even hear a short monologue in Italian before Morricone`s The Return of Ringo kicks in (English vocals by Maurizio Graf this time) on the Japanese 45 version. 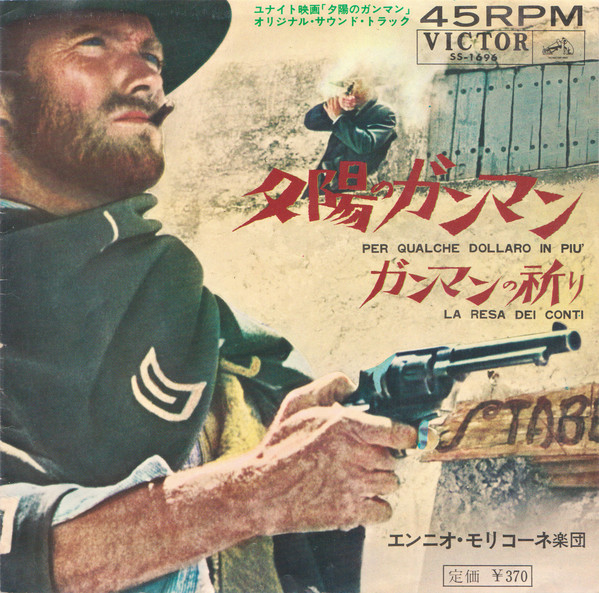 Was I going to keep finding more of these 45s or was I at a dead end? Outside of the wonderful individual singles for specific films there is also a good bunch of compilations which were 7 inch records but were presented in 33 1/3 RPM which baffled some non-Japanese friends of mine but it was just a good reason to cram four great spaghetti western themes onto one little record. Many of these feature the same songs and have alternative covers. Some are even not performed by the artists in some cases. Imagine my horror when I bought a For a Few Dollars More single to find out it was performed by The Film Sound Orchestra and not the Morricone original. 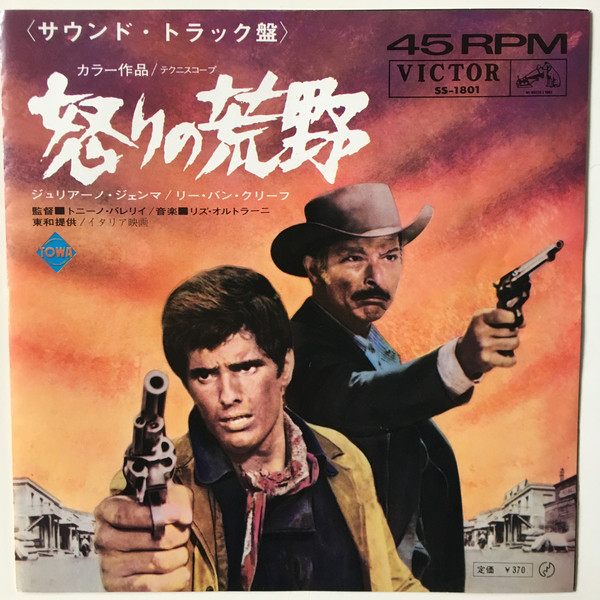 We as diehard fans of spaghetti westerns collect all kinds of memorabilia be it posters, lobby cards, CD soundtracks, books, laserdiscs, DVDs, Finnish or Dutch VHS, and now Blu-ray and 4K. It can seem endless when we as collectors set a goal to achieve and we find out we missed out on something. When I started collecting Japanese 45s of spaghetti westerns soundtracks I guessed it would end up being a lifelong chase but actually if someone reading this decides they want to start this hobby then I say go ahead. It is basically a realistic goal which took me about 10 years to realize that even though it was a niche it was a pretty compact and sparse selection that you can put down to about 60 to 70 releases on 7 inch. You won’t be chasing your tail trying to find some rare 80s reissue because sadly just like the genre itself the Japanese spaghetti western 45s put away their spurs quite quickly. The wonderful music will always live on for us fans though. 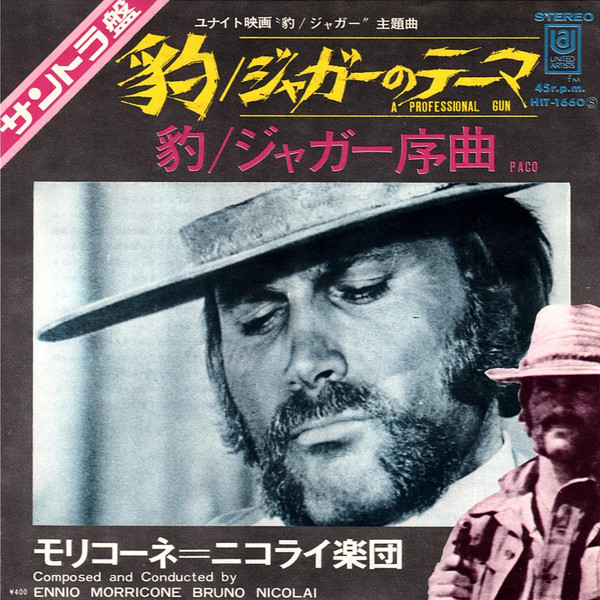 You never know when another will pop up because recently (this year) I came across a 1970s two track budget single featuring Django and had The Long Days of Vengeance by Armando Trovajoli as a B side. Not too shabby, if you ask me. Maybe there are still more 45s out there… 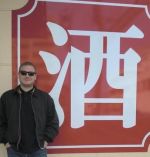 Paul John Blair is from Edinburgh, Scotland and has been living in Japan since 2005 where he continues his passion for spaghetti westerns. He ‘runs’ a modest page on Facebook called The Spaghetti East that is a laidback review spot for the genre he has loved since he was a boy. Forum Profile.

Retrieved from "https://www.spaghetti-western.net/index.php?title=A_Fistful_of_Vinyl:_Japanese_Spaghetti_Western_45s&oldid=126478"
Categories:
Cookies help us deliver our services. By using our services, you agree to our use of cookies.