A Genius, Two Partners and a Dupe - German DVD vs Danish VHS

The following is an analysis of the cut differences between the Danish VHS release an the German Paramount DVD release of "A Genius, Two Partners and a Dupe". The time indication is based on the German DVD without the Paramount logo intro.

Missing take @00:08:09; Tom (Mario Valgoi) falling over and hitting the table after been shot by arrows

Shortened scene @00:36:59; Lucy (Miou-Miou) starts singing a hymn at the brothel, but is interrupted by the whorehouse-owner... Danish release has Lucy singing while Joe Thanks (Terence Hill) walks around collecting money from the visitors at the whorehouse; you know, like a church collect... This scene is ~1'31 minutes longer in Danish video release!

Missing frame/-s @00:50:41; German release states that this release contains 9 minutes of 'reconstructed scenes' and I don't know if this is one those scenes which has been reinstated, but there's missing a frame or two when Steamengine Bill (Robert Charlebois)'s bullet hits the first villain in the head.

Missing take @00:55:20; When Lucy is dressing Steamengine Bill up to look like Colonel Pembroke, there's a take missing of Jelly Roll (Piero Vida) walking around a table before sitting down on a chair next to Joe.

Shortened take @01:36:38; When Steamengine Bill sends off the posse of soldiers to catch Joe, who've just kidnapped Major Cabot (Patrick McGoohan), Danish release has an extended take of Steamengine Bill getting hit by a white wall of sand, whirled up by the horses hoofs.

Alternate take @01:51:06; The sequence in which Joe divides the money stolen from the army, there's a close-up scene of Lucy's face while she's looking at the 3 bundles of money: In the German version she looks down smiling at the money and then at Joe with an even bigger smile, while the shot in the Danish version is taken from a different angle and Lucy's is looking more sad (like 'our adventure is over and now we have to part'). 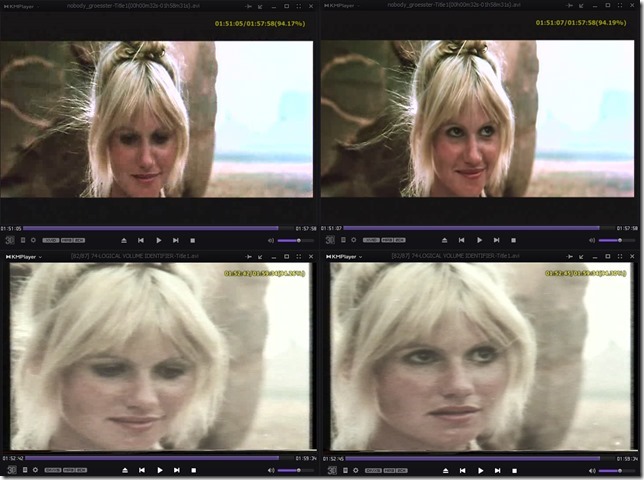 Retrieved from "https://www.spaghetti-western.net/index.php?title=A_Genius,_Two_Partners_and_a_Dupe_-_German_DVD_vs_Danish_VHS&oldid=133159"
Category:
Cookies help us deliver our services. By using our services, you agree to our use of cookies.