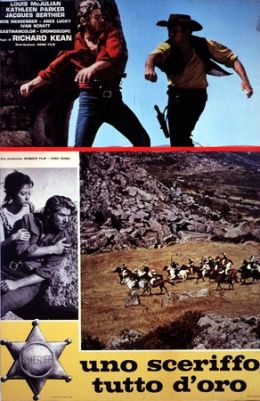 A sheriff is not happy with his pay check, and therefore works out an intricate scheme to lay his hands on a stash of gold, but there are several hijackers on the coast. A spaghetti western in the style of a caper movie, with changing alliances, double-crossings, etc., and an off-beat finale that caused some controversy

The first spaghetti western by Osvaldo Civirani, a jack of all trades turned director. He had started within the business as a photographer of screen shots and would eventually make a fortune by collecting his best and most revealing pictures in books with alluring titles such as Un Fototagafo a cinecittà, tra negativi positivi e belle donne (*1), but in 1967 he was - like most people in the business - dreaming of making a western.

The lyrics of the ballad sung by Don Powell over the opening credits, tell us that gold will change a man, and that's very much the story of this movie: it's about gold ("that little stone that glows on the sand") and the effect it has on people, including Jeff Randall, the newly appointed sheriff of Blackstone. Being a sheriff is an ungrateful job and Jeff is therefore dreaming of a stash of gold bars worth $ 500,000 that will be transported through his jurisdiction. He saves a convicted thief and blackmailer called Arizona Roy from the gallows (under a false pretext) and works out an intricate plan to rob the stagecoach in which the gold is hidden. The plan succeeds, but the two men are duped by Jane, a cunning and manipulative young woman. On her turn, Jane soon loses the gold to a gang of Mexican outlaws and in order to get the gold back, the three will have to collaborate ...

With its changing alliances, double-crossings, and the three protagonists vying for a gold treasure (eventually working together against a common enemy) the story is reminiscent of the caper movies Castellari made around this time, such as Any Gun Can Play and Seven Winchesters for a Massacre. But the comedy that had marked Castellari's movies, is less prominent here, only surfacing in the film's light-hearted finale. This finale is by the way quite controversial. All of a sudden there's an about face, apparently because Civirani wanted to redeem his protagonist, sheriff Randall. In most comments it was called a major let-down, but some have defended it; in an interesting comment on the Italian blog CineMaestri, it is compared to the similarly redemptive finale of John Ford's Stagecoach. Most outdoor scenes for the movie were shot on Sardinia and (along with the cast of unknowns) give the film a distinctive look. French actor Berthier had appeared in the rather obscure Colorado Charlie and would make one more (brief) spaghetti western appearance, in Corbucci's The White, the Yellow and the Black; according to the French spaghetti western forum, he was very active in the dubbing business. If you like Don Powell, you'll like the theme song, if you don't like him, you'll hate it. Nora Orlandi's score is very fine, with a particularly affectionate whistled theme halfway the movie, but parts of the score sounded suspiciously familiar. 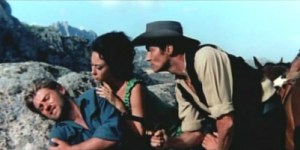 Simon Gelten is a long time contributor to the SWDb. "I'm not as old as Tom B. but I'm working on it. I hope to catch up with him by the end of the next decade.", he says. Simon saw all movies by Sergio Leone and several by Sergio Corbucci in cinema, most of the time in Eindhoven, the city where he was born. Currently, Simon is living in Turnhout, Belgium. Simon is active within the database as both Scherpschutter and his alter ego Tiratore Scelto.
Retrieved from "https://www.spaghetti-western.net/index.php?title=A_Golden_Sheriff_Review_(Scherpschutter)&oldid=115317"
Categories:
Cookies help us deliver our services. By using our services, you agree to our use of cookies.