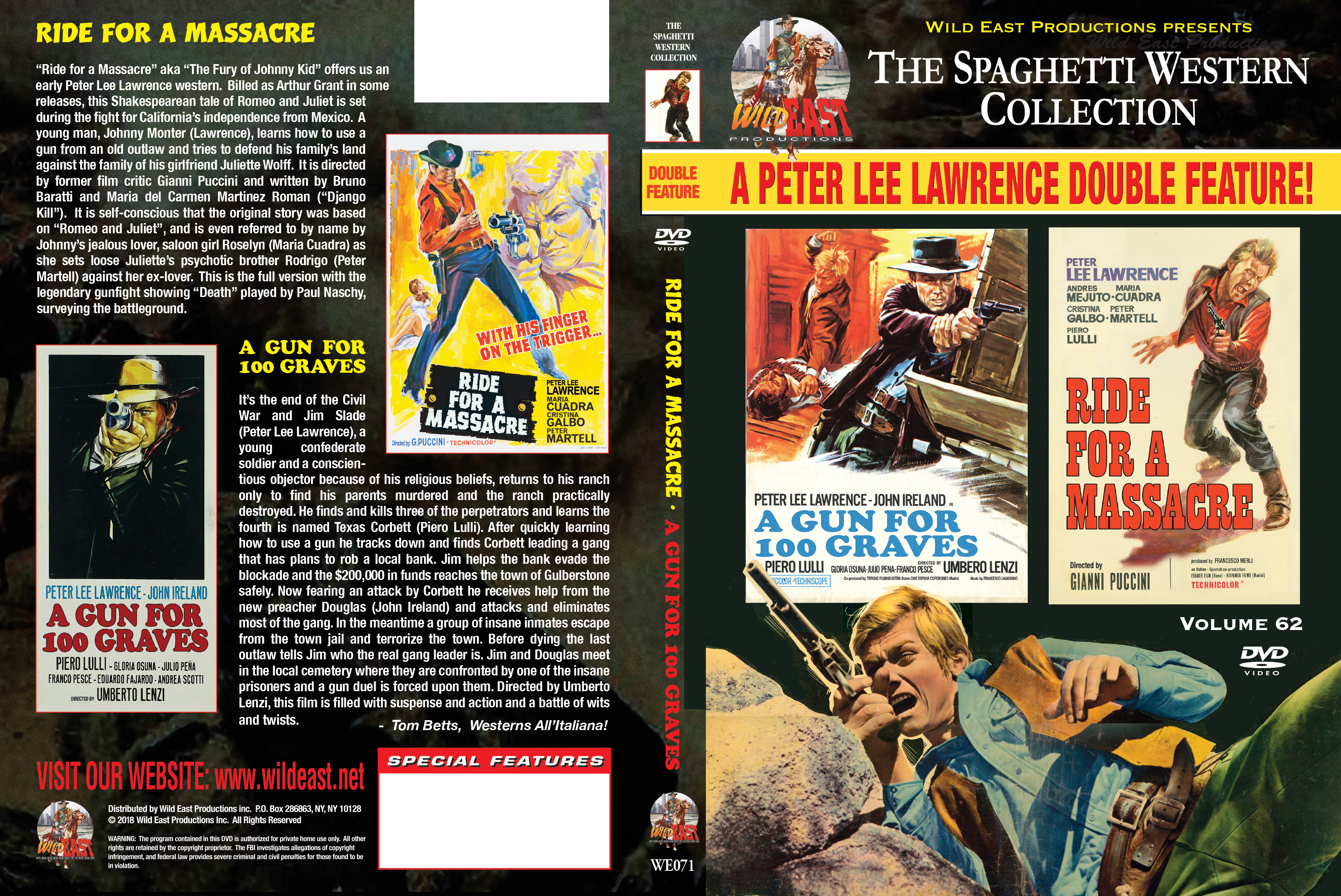 As my list shrinks daily of Italian westerns I have not seen... finding a new unviewed one is always exciting. I had yet to see A Gun for 100 Graves, before my first viewing of it on the newly released Peter Lee Lawrence twofer from Wild East Productions the other night. Also on the release is the faux Romeo and Juliet inspired film Ride for a Massacre aka The Fury of Johnny Kid (Dove si spara di più, 1967). Being a huge fan of the Italian Poliziotteschi cycle of films, when I saw the director of Ride for a Massacre was none other than Umberto Lenzi, director of such classic Italian crime flicks as, Gang War in Milan (1973), Almost Human (1975), Syndicate Sadists (1975) and the utterly brilliant Violent Naples (1976), I was pretty stoked. Sadly, Lenzi’s brilliance that shone through in some of his other genres offerings did not on A Gun for 100 Graves. In fact his two Italian westerns, Go for Broke (Tutto per tutto, 1968) and the film up for review A Gun for 100 Graves, are mid-tier at best. Not that either of Lenzi's westerns is bad, they are just ultimately uneven and rambling affairs, with Go for Broke, being the vastly superior of the two. 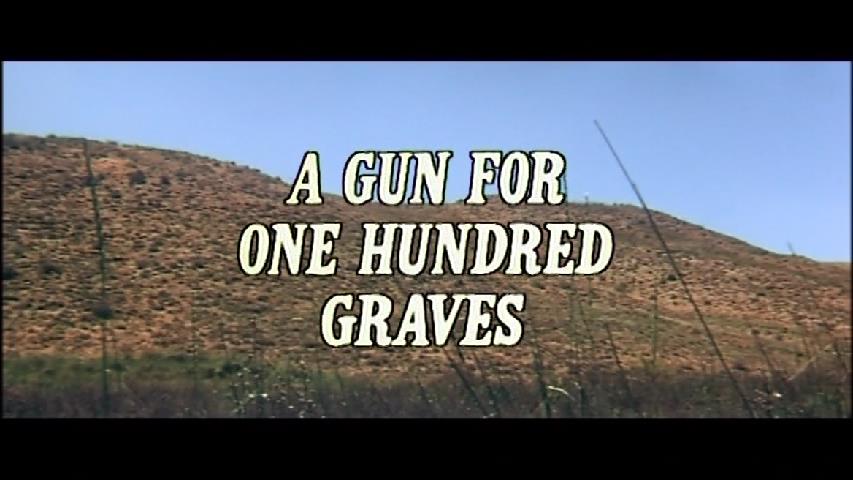 The pacing is awful in A Gun for a 100 Graves and the payoffs are just emotionally empty. There are way too many things going on in the film and it goes in different directions and the unconnected bits leaves things unresolved in one's mind. That being said, the film while borrowing from the westerns that predated it, is oddly turned enough to keep one interested and in a genre of repetition, variation is always a welcome change. Peter Lee Lawrence’s character Jim Slade is introduced in his military outfit being sentenced to two and a half years in prison for being a conscientious objector. The next thing you know without any hint at the time he spent in the prison he is pardoned because of the war of the states coming to an end. When Jim Slade returns home, he finds his parents murdered... wants vengeance... but does not know how to handle a gun. A friend, an ex-gunfighter now confined to a wheelchair, from a bullet, must teach him to draw and shoot (but never shown), and before you know it, he's cutting down three members of the gang of four who murdered his parents. 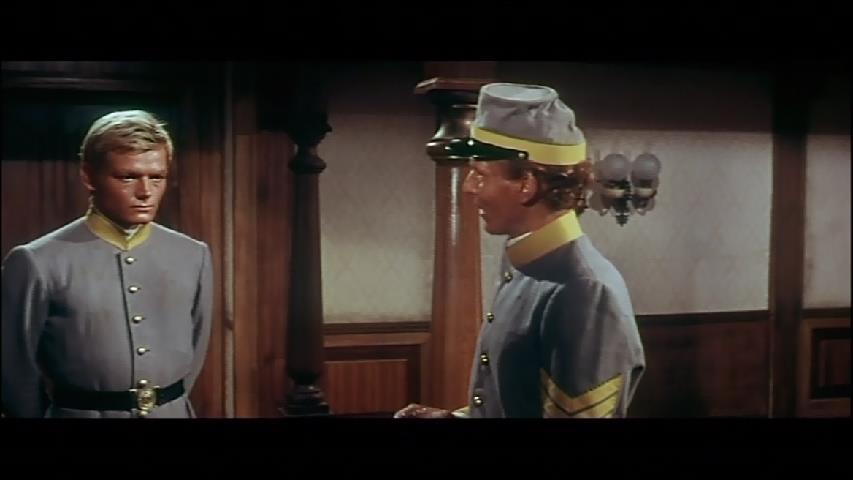 While obviously we as viewers don’t need to be shown everything, there are scenes that are crucial to establishing the order of time in our minds. The two scenes of Jim Slade wanting to learn how to shoot and his release from prison are given no explanation concerning the time spent or in the case of the learning to handle a pistol, the length of a training period, as is broached in both Day of Anger and Death Rides a Horse. The older younger component which is prevalent in both of the films just mentioned would also be broached in A Gun for a Hundred Graves, with the introduction of the John Ireland Douglas character, but, not in a mentoring sense but as a trusted man of the lord and a fast gun, but also someone who may not be who he is passing himself off as. Peter Lee Lawrence plays a similar character in the Leon Klimovsky film Raise your Hands, Dead Man, You’re Under Arrest (Su le mani, cadavere! Sei in arresto, 1971). In that film Lawrence’s character Sando Kid, begins as pacifist medical assistant, helping the wounded, after a battle until the Aldo Sambrell character Lee Grayton bursts into the make shift infirmary and begins to shoot the injured until he bates Sando Kid, handing him his gun and telling him to shoot him. Sando Kid does not shoot, but one of the lame patients shoots Grayton in the hand, sending him rushing from the place. In Raise Your Hands, Dead Man, You’re Under Arrest, Sando Kid is given a proper gun training, but how his personality went from a pacifist to a cocksure pistolero is hard to fathom, which is also how the Jim Slade character became in A Gun for a Hundred Graves. 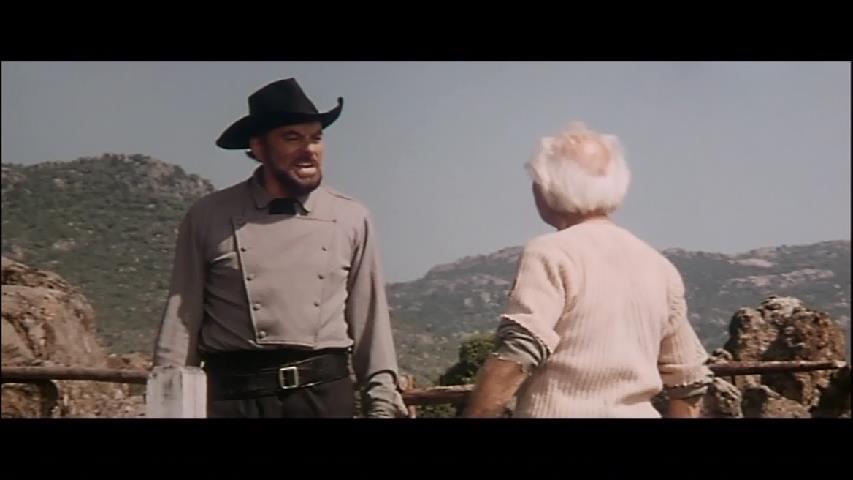 While looking for the last remaining killer of his parents J. Texas Corbett (Piero Lulli), Jim Slade ends up in Galveston. In Galveston, Corbett attempts to rob the local bank, expecting $200,000 to have been transferred to that bank from Dodge City. Problem is, the money has not arrived, so Corbett and his men make off with only a few hundred dollars and set up outside of town blocking the entrance and exits, waiting for the stagecoach carrying the loot to arrive. The John Ireland character Douglas is introduced when Jim arrives in Galveston and is as quick at sprouting a biblical passage as he is with his colt. Both Jim and Douglas are offered $5000 to help defend the town against Corbett when he and his gang return for the loot, both initially refuse, but then each eventually agrees to help. While all this is going on, a group of inmates from the insane asylum are being housed in the jail, after one of their own burnt down the mental institution. When the inmates eventually escape they cause havoc, burning down the sheriff’s office and trying to rape the saloon singer Elisabeth. 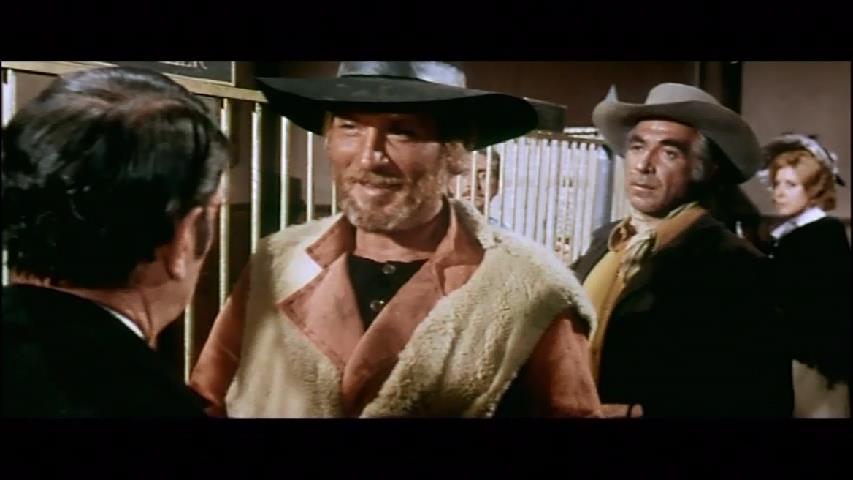 There are double crosses abounding and the Douglas character may not be a true man of the lord, who he proclaims himself to be. The film besides the instances mentioned above about the issues with time, also has some real leaps of believability, like why Corbett doesn't wipe out what few people are left in town and kill off the Jim Slade character when they have him in their grasps. The film features a beating for the Jim Slade character, double crosses, young and old component. money hidden in a grave and the revenge for the murdered love one angle. Which are all commonly used spaghetti western plot devices. On the other hand, it has over the top inmates from a mental institution mixed into the plot including Eduardo Fajardo and Victor Israel and some spirited gunplay on the plus side. While I can't say the film overall was a success, its has it moments and has enough odd things going on and some good performances to recommend it. At the beginning of the film Jim Slade has a glass of whiskey thrown in his face, because he does not drink alcohol, and is told by the military official that he's not a real man because he does not consume it. After being ridiculed throughout the whole film for his abstaining from liquor... at the end he drinks a shot of whiskey, thus signifying his immersion into Italian western style manhood. 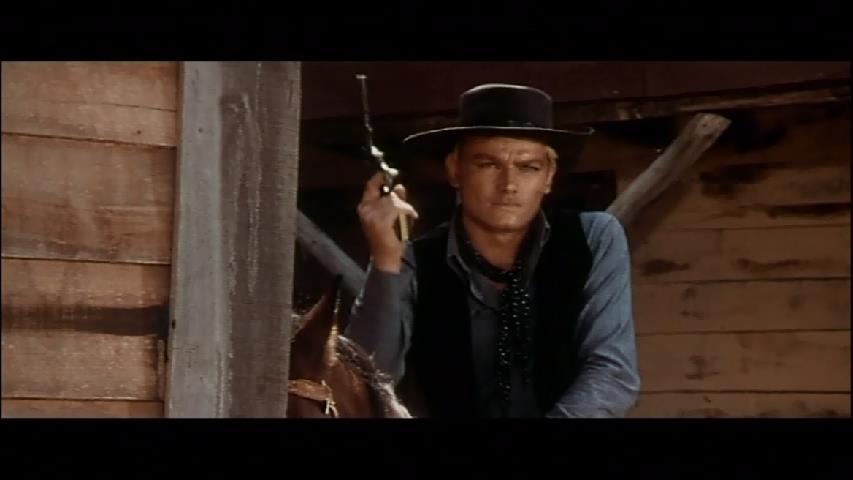 The print and sound quality of A Gun for 100 Graves is of outstanding quality. Besides the two films listed above, you get both films in Anamorphic Widescreen presentations, Theatrical Trailers, and Picture Galleries. While the other film Ride for a Massacre is the superior of the two, both films are excellent additions to the Wild East stable (Wild East DVD catalog). In fact, this twofer along with their new release of Requiem for Gringo (Requiem para el gringo) are of exception quality. Look for my review of Ride for a Massacre coming soon to SWDb!

Article written by Michael Hauss, author of reviews and articles for Monster magazine, We Belong Dead, Multitude of Movies, Divine Exploitation, Exploitation Retrospect, Grindhouse Purgatory and Weng's Chop and various online sites that includes Diabolique, Multitude of Movies, Theater of Guts and the SWDb. He has a love of film with particular interest in the Spaghetti Western and Horror genres. Michael lives in the United States where he resides with his daughter and their two cats Rotten Ralph and Fatty boo-boo.
Retrieved from "https://www.spaghetti-western.net/index.php?title=A_Gun_for_100_Graves_-_Wild_East_Productions&oldid=122611"
Category:
Cookies help us deliver our services. By using our services, you agree to our use of cookies.