A Hole Between The Eyes & Tequila Joe DVD review 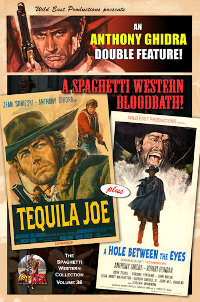 A Hole Between The Eyes

A stranger arrives at a monastery to stop for food and drink, but shortly afterwards the man he said he was looking for arrives, dropping dead off his horse. He has a play card with him, with part of a sentence on it. The stranger is looking for two other play cards, together the sentence points to the location of a gold treasure. As the stranger rides into town, he tries to outwit the local heavyweight gangster, who calls himself General, who has the second play card. While they chase the third card, the stranger is screwed over and has to escape beaten and starved from their holdout, while the General has located the third play card. They meet again at the treasure's location... for a deadly face-off....

Opinion: This is a weird movie. A stranger rides in, rides out, in best Stranger manner, but for the typical Blondie or Stranger character, this one has far too many scruples and we never know why or what he was after. At any rate, this movie was surprisingly entertaining, had decent production value and I liked the music quite a bit. The story writing was not very overwhelming, which shows in the characters' motivations and some unresolved questions. But overall I found the actors quite convincing, despite Ghidra's usually misplaced mimicry. All in all definitely not a bad movie!

Sheriff Joe is an alcoholic and keeps his nose out of a local feud between two rich land owners. The feud costs the lives of innocent bystanders, the place is lawless. Then in comes a new young deputy, and he tries to convince the Sheriff to man up and do something. He takes it into his own hands, trying to mediate between the feuding parties, to no avail. Then one of the landowner, Mulligan's daughter gets kidnapped. Broken and abused she returns, and the two prepare for a final fight, while the deputy wires for the Army to take over the reigns of the town and restore order. The young deputy however prepares to neutralize one of the gangs, and restore law and order through wits and determination.... and then even the sheriff catches some of that old spirit again, but the game ain't over yet....

Opinion: The movie is surprisingly good, with decent acting, nice dialogues and a nice message. Ghidra does a fine job, so does the young feller. I would go as far and say the movie has quite a lot of substance and good screenwriting. However, it lacks in the action department a little. All in all however, Tequila Joe is recommended, and hey, Ghidra is solid gold in this one.

Tequila Joe: Aside from the pointless English and Italian trailers and the usual picture galleries, there are also no extras. Alternate credits sequences would have been interesting. But what's really interesting is that that quality of the print is really great compared to that of the other feature. In fact, it looks top notch, and the audio is also alright.

Hole Between the Eyes: There are no opening credits to speak of, and no closing credits neither. But its an anamorphic transfer that offers decent contrast and colors of this uncut version of the film. Unfortunately the print shows scratches, dirt and other damage heavily and looks far from remastered, which is a bit unfortunate, now that we know that the movie is really quite good. As only extras we get the atmospheric German trailer and a picture gallery. I would have been interested in some alternate opening credits for example....

Tequila Joe is definitely the star of this double bill, and Anthony Ghidra's glory hour. Wild East has done a nice job putting these two features together, and at least the better of the two also received the better treatment. For fans definitely worth checking out!

Retrieved from "https://www.spaghetti-western.net/index.php?title=A_Hole_Between_The_Eyes_%26_Tequila_Joe_DVD_review&oldid=115462"
Categories:
Cookies help us deliver our services. By using our services, you agree to our use of cookies.