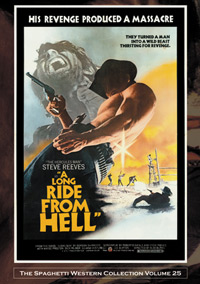 Sturges (Reeves) and his brother and foreman are going after their stolen horses. While they've set up camp for the night it seems someone robbed the southern pacific railroad's gold transport. His foreman killed, him badly wounded, they're being framed as collaborators and thrown into Yuma prison, where Sturges has to work in the mines. The warden killed his brother. One day they break out... Now he's being chased by the warden and his henchmen while he's out to get whoever is behind the train robbery and the frame. He suspects his old friend behind this, who had met them when they set up camp and posed as an agent for the railroad. He also suspects the Sheriff (Palmara) to be in on the deal, and so he tracks them down, and kills one after another....

Opinion: From the first minute this film suffers from its very TV-ish looking aspect ratio, which to me personally is always a bad sign, but not necessarily. A Long Ride to Hell starts out like any other American western and develops into a little intricate story with 2-dimensional villians lacking of any backstory and an emotionless star, who might look handsome in a close up but is unable to carry the movie. Luckily, the film is a rather quick experience, with a few shoot outs thrown in for good measure, some decent camera work by Barboni and even a short moment of love! It would be easy to dismiss A Long Ride from Hell as a failed effort to copy a standard American western or as a vehicle for Reeves, but in the end that's what it looks like, despite the input of some of the genre's bigger names. It is a solid movie, from a technical perspective, but the script is a shame and the movie's over before one could ask "why, what, when, how". For the genre fan it's definitely a must see, if only to fill yet another gap. All in all though, it's not a very great film unfortunately.

Considering the unfortunately rather low quality of the movie's storytelling I'm not sure if this one was worth the wait. But Wild East nevertheless put a lot of effort into this one. First off I think this is the first animated menu from the New Yorkers. The film's transfer looks decent. At times very crisp image and usually quite colorful. Yet on the other hand some of the darker scenes lack lots of contrast and then there are lots of scenes where the movie looks a bit lacking clarity. All in all quite decent looking. The sound looks even better and leaves not room for complaint. The interesting part are the extras. First of there's the very exploitationesque US trailer and then there's a 55-minute interview with Mimmo Palmara that touches pretty much everything you might wanna know about the man and his involvement with Spaghetti Westerns. An interview almost better than the movie. But that's not it yet. There's another feature withe the Italian fanclub at Steve Reeves' house. It's nice to see the man take so much time with his fans. It's not really an interview however, but merely the fanclub fellas walking around with him on his ranch chatting.

A Long Ride from Hell is not a particularly great movie, yet it offers some shallow entertainment and is full of names that should mean a lot to the genre insider. I would say it's worth watching. The DVD on the other hand I can wholeheartedly recommend, mostly because of the one hour Dick Palmer interview which is almost better than the movie itself. Wild East offers a really good presentation of this movie on DVD, that should not be missing from a collectors' shelf.

This DVD was provided to us by Wild East.