Nearly all spaghetti westerns produced by Dino De Laurentiis were marked by off-beat casting, but A Man called Sledge beats them all. It has both Maverick and McCloud teaming up with the Italian answer to Klaus Kinski and one of the country's most notorious sex bombs to make a heist western, co-scripted by a member of the Peckinpah clan. The English language version only mentions Vic Morrow as director, the Italian edit has Giorgio Gentili credited as co-director, but possibly only for financial reasons (1). And then there's this rumour that John Sturges (who isn't credited in any version) was responsible for a few key scenes (2). It clearly was a troubled production. According to Tom Betts there was a lot of disagreement about the editing of the movie. At one point Morrow wanted to have his name removed from the credits, and Garner was very discontented with the lack of professionalism in Europe.

In a beautiful opening scene, set in a snow-covered landscape, we watch Lucas Sledge (Garner) robbing a stagecoach. The next day he is trailed by an old man, who has some first hand information about $ 300.000 in gold, kept in a vault in the heart of a prison fortress. The old man was locked up in the cell next to the gold and has been dreaming of robbing it ever since. Gold, so he says, gives off a scent, and it whispers to you through inches of steel. Like the old man, Sledge soon becomes obsessed with stealing the gold, even though his girlfriend tells him they don't need it to be happy. The gold is transported to the prison fortress by an escort of forty heavily armed soldiers. An assault on the escort is madness, but Sledge comes up with the daring plan to let himself be locked up in the fortress as a prisoner, in order to start a riot and use the resulting disarray to open the vault. Against all odds, the plan succeeds, but problems are far from over for Lucas Sledge ... 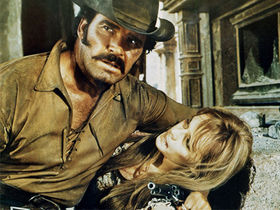 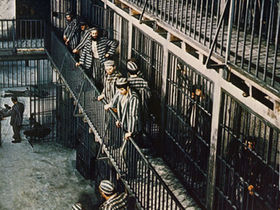 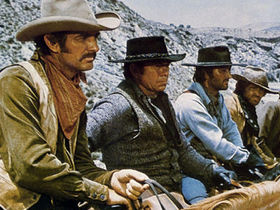 The casting-against-type of Garner, shortly after the gentle and witty Support your local Sheriff, is very effective. I always suspected suppressed anger behind those faithful doggy eyes. In Guns of Diablo he had already shown flashes of his darker side, and here he finally gets the chance to unleash all his demons. Veteran actor John Marley is also very good as the old man, vile, greedy and obsequious, but the other actors aren't granted enough screen time to make their characters really work. Weaver and Akins seem a little confused, and Antonelli gets only some scattered moments as Sledge's girlfriend, who understands the fatality of his venture much better than he does. The only supporting actor who manages to make a lasting impression, is Bruno Corazzari (the sadistic killer from Quanto costa morire) who only needs to put up his threadbare umbrella to send a shudder through your spine.

The action scenes are very fine, with some of the more elaborate sequences - such as the opening of the vault during the riot - are outstanding. On the other hand some transitional scenes - like the card game that links the prison riot with the final shootout - feel rushed. Large parts of it lack the typical spaghetti western atmosphere, but the grand finale, with a shootout taking place during a religious festival, and Garner splinting his arm with a crucifix, is unmistakably Italian. There's one action sequence, with Garner and Akins trapped in a western town, people shooting at them from the rooftops, that is very reminiscent to the opening scene of The Wild Bunch, with some individual shots copied almost literally. It's very tempting to suggest that Frank Kowalski, who co-wrote the script with Morrow, had a hand in it. Kowalski was a Peckinpah regular, usually as a script supervisor or dialogue director, but occasionally as second-unit director. He also wrote the original story for Bring me the head of Alfredo Garcia.

A Man called Sledge has its flaws, but Garner's character, who wins every battle, but eventually loses the war, adds an element of existential fatality to the movie. One (allegedly very nasty) scene involving La Antonelli was cut from most versions, making her part even more ungrateful.

Simon Gelten is a long time contributor to the SWDb. "I'm not as old as Tom B. but I'm working on it. I hope to catch up with him by the end of the next decade.", he says. Simon saw all movies by Sergio Leone and several by Sergio Corbucci in cinema, most of the time in Eindhoven, the city where he was born. Currently, Simon is living in Turnhout, Belgium. Simon is active within the database as both Scherpschutter and his alter ego Tiratore Scelto.
Retrieved from "https://www.spaghetti-western.net/index.php?title=A_Man_Called_Sledge_Review&oldid=108265"
Category:
Cookies help us deliver our services. By using our services, you agree to our use of cookies.