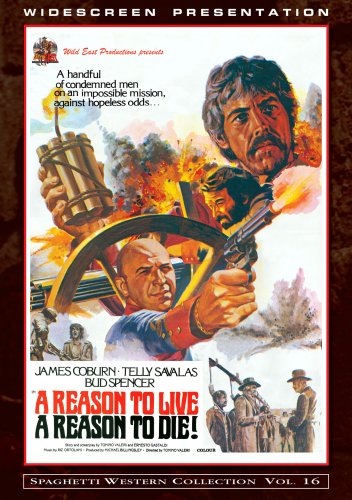 Colonel Pembroke is captured by Union troops along with a bunch of marauders, rapists, looters and small-time gangsters. The acting Major though sends him out to recapture Fort Holman, which Pembroke had surrendered to the Confederate army because their Comander had used Pembroke's son to blackmail him and eventually killed him. Pembroke embarks on that impossible mission, rescuing the bunch of criminals from the gallows, under the condition that they serve as his own private tiny army, promising them a treasure of gold. The infiltration of the fort turns out to be tough. It is a heavily fortified and guarded fortress in the mountains, with an alarm system. The infiltration is a partial success, and turns into a massacre of CSA troops. In the end, Pembroke gets to take revenge for his killed son.

IS IT A GOOD MOVIE?

The film is very reminiscent of the Dirty Dozen, as it bears all its trademarks. A bunch of criminals rescued from their certain punishment to give them a chance to fulfill and impossible mission. The story is hence very straightforward, without much depth, character development or fancy writing. A simple mission, a bunch of simple-minded men, and lots of soldiers to be killed. Storywise, a pretty lame film. But enjoyable. What makes the film worthwhile is the directing by Valerii that is usually good and a subtle score by Ortolani. James Coburn, Bud Spencer and Telly Savalas make good performances. Spencer is especially good, and he also gets most of the screen time. It is not really that much of a Western movie, more a civil war version of the Dirty Dozen. As such, it doesn't have many Western moments and it misses most of the trademark spaghetti western features. Aside from that, it is a decent adventure film, with good actors, some nice moments and slightly above-average directing.

Wild East provides the afficionado with yet another decent release of a Spaghetti Western that has long been sought. The DVD is a nice presentation that scores in the audio and video department, although the opening credits are horrible to look at (so are the closing credits) and there aren't really any extras worth mentioning. The film is B-grade material with some great performances. Overall, the spaghetti western fan can't do anything but get this disc, yet another thumbs up effort by Wild East and definitely a fun flick to watch.

Retrieved from "https://www.spaghetti-western.net/index.php?title=A_Reason_to_Live,_a_Reason_to_Die_DVD_Review&oldid=56454"
Categories:
Cookies help us deliver our services. By using our services, you agree to our use of cookies.