A Rope at Dawn Review 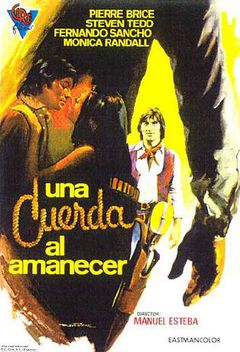 This paella/spaghetti western of director Manuel Esteba is the proud owner of a unique record – it’s easily the one with the most remarkable differences between two available versions. The Italian edit (the one that was dubbed into English and is known as You are a Traitor and I'll kill You or You are a Carrion and I'll kill You) is a perfect example of movie butchery: some of the original dialogue has been whittled away, new lines were created for scenes without dialogue, and several story elements have been altered (for example, the identity of the mysterious gunman is different). According to Giusti’s dictionary, producer Elio Pannaccio was responsible for this doctored version, probably in an attempt to make the movie more acceptable for international audiences, but his efforts were counterproductive. In this review I focus on the Spanish version.

It all begins with the jingling (shoe-)bells of a black-clad gunslinger (we don’t see his face), who enters a cantina and interrupts the game of four gentlemen playing poker. Three of them run away, the fourth one faces a violent death. His departure from the land of the living is accompanied by the trumpet-guitar theme introducing the credit sequence, which is one of the weirdest I’ve ever seen. It contains cartoon snakes illuminated by some sort of aura. After the credit sequence we get to know the different characters. Steven Tedd (Giuseppe Cardillo) is a government agent called Calder, sent to a town controlled by the ruthless speculator Campanita (Pierre Brice) and his henchmen. A lonely woman Nancy (Mónica Randall) has also come to town on a stagecoach. Antonio Molina Rojo is Campanita’s experienced tutor and finally there’s Sebastian, played by Fernando Sancho, a prospector looking for gold in a nearby mine.

The characterizations are among the more interesting aspects of the movie. Tedd´s Calder is a relaxed lawman, who’ll give you the impression he had been smoking something before entering a scene; his outfit and hairstyle make him look like a true Elvis of the West. Brice is a self-confident cold-blooded killer with a love for extra-long cigars, who seems to have everything calculated for three weeks ahead. Sancho is a clumsy and funny golddigger, who talks to his donkey Margarito like to his best friend (he also gives the animal a fine amount of whisky to drink). Through a flashback scene we learn that Rojo´s gunslinger once saved Campanita´s life and became his mentor for all criminal matters. Since then, these two delinquents have become friends and it is quite unique and refreshing to see such a sincere bonding among baddies in a SW. Randall´s Nancy is also an interesting character ; she wants to take the revenge on Campanita – so, Pierre Brice will be overloaded by a sudden increase in the number of attempts to send him to the other side. Well, that’s called tough guys’ bad luck.

Brice´s and Sancho´s characters have more depth than those of the others. Brice´s acting is very minimalistic, almost contemplative from beginning to the end – in one scene he quietly points a revolver at Sancho´s forehead, and this works better than any noisy kind of menace would ever do. Sancho starts as a harmless drunkard, but there’s a night scene in which he is beaten up and his animal friend killed, which turns him into an avenger. Normally I don´t care that much about animal´s poor life in the movies, but this is something else – maybe this will sound funny, but the death of Margarito felt as if it happened to a human being and had a similar impact. I think this was caused by the disarming depiction of their bond. Well, if children can care about Joe Carraclough and Lassie, I can care about Sancho and Margarito – even if there´s a feeling of a parody in it. This parody problem will arise in the end – without spoiling it, I just add that on the first sight it made me laugh, but on second thought I couldn’t deny it might have been a little goofy, but I was still surprised by it. I think the deliberate game to fool viewers works pretty well; some false baits are thrown out to put you on the wrong track in relation to the true identity of the gunman from the intro (or at least to keep you busy and distract your attention from the true secrets that eventually will be exposed).

The movie is not very long – the Spanish version I watched has a running time of no more than 75 minutes. It seems an adequate length, and surprisingly the film doesn´t contain any unnecessary barroom brawls (a genre viral disease), which could make it longer and more „funny“. All in all, this is a sad movie and its often melancholic nature is emphasized by the overall moody atmosphere and the unsuccessful attempts to assasinate Campanita. It all leads to some sort of anti-climax finale (well, at least it is an anti-climax for Steven Tedd). Daniele Patucci´s theme played over the end credits create a feeling of a predestination – things happened as they had to happen.

Final thoughts? After reading many not very positive comments on the Italian version, the Spanish one surely deserves a complimentary note. The story is surprisingly well written, and at least makes sense (the Italian version has some mind-bending narrative troubles), it has intriguing characters (after all, you can see Pierre Brice shooting honest people), a couple of well-directed duels (Sancho vs. Brice on a street of a sleepy town) and the cinematography offers a few interesting camera angles (at the same time this is not overdone). Maybe it´s not a classic, but there’s enough for one decent spaghetti western evening. However, make sure that from two existing versions, you haven´t picked up the evil one.

For more informations about differences between two version, you can visit our forum topic or cinemadrome forum(http://cinemadrome.yuku.com/topic/948).

Retrieved from "https://www.spaghetti-western.net/index.php?title=A_Rope_at_Dawn_Review&oldid=96829"
Categories:
Cookies help us deliver our services. By using our services, you agree to our use of cookies.