A Sky Full of Stars for a Roof Soundtrack Review 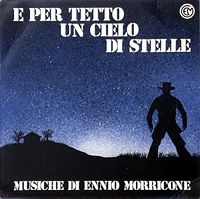 Ennio Morricone is without a doubt the most famous western composer there is. And when he was called upon to compose Sergio Leone's rule breaking Italian western, Morricone too could break some rules. Or guidelines. Where most Western scores before were large scale, epic romantic pieces with large string sections and mournful harmonicas, though beautiful, not very bold. Morricone's scores were tight, well constructed, and very cool. He used instruments like electric guitars, whistles, whips, bells, drums, etc. Creating a sylized feel to the equaly stylized Spaghetti Westerns.

One of his best scores in my opinion is for Giulio Petroni's Western dramedy, A Sky Full of Stars for a Roof. Morricone always wanted to do different things when working with directors other than Leone. Giving the films a certain individuality. The same is with this film. The tunes alternate between lively fast tunes to slow, mournful tunes. Matching the movie's frequent shift in tones.

For the faster tunes, he uses fiddles, strings, banjos, electric guitars, clarinets, drums, and some recorder type instrument I do not recognise. The tune starts with a slow fiddle that seems rather American in sound then rapidly builds with the banjos, guitars, and strings into a steady tune with the drums setting the rhythm and the recorder taking the lead with the numerous other instruments as support. This is a very catchy tune that makes any scene it appears in ten times better. Though the tune is played relatively few times. It is a great piece. A variation of this type of tune appeared in Clint Eastwood's Two Mules for Sister Sara also composed by Morricone.

The other tunes, as I said are slow, mournful yet beautiful and catchy. One of these tunes is lead by a banjo with guitars backing it up, and drums setting the pace. There are variations on it that are a little more hokey but it is a very enjoyable tune that is played quite often and also increases the beauty of the scenes it graces. The other tune is slower. With Alessandro Alessandroni's whistling being the main instrument. Guitars serve as back up. This graces the films saddest scenes.

A forgotten score for an underrated film by the magnificent Giulio Petroni. But the real star here is Morricone and his beautiful score. The faster tune is reused in the Spaghetti Western themed video game Red Dead Revolver. A great score.