A Time and Place for Killing Review 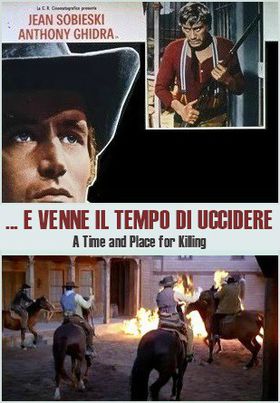 An ordinary spaghetti western, saved by a good performance by Anthony Ghidra as a gunslinger turned town drunk who eventually comes to his senses

The only western directed by Vincenzo Dell'Aquila, a screenwriter who had worked with the greats, among them Sergio Leone (*1). He often formed a screenwriters pair with the much better known Fernando Di Leo, who also contributed to the script of this movie. Anthony Ghidra is the permanently inebriated sheriff - 'Tequila Joe' - who looks the other way when two rivaling gangs turn his town into a battlefield. Jean Sobieski (*2) is the newly appointed deputy trying to restore some law and order. Of course Ghidra redeems himself in the finale, when he smashes the bottle, picks up his guns and sides with Sobieski to clean up the place ...

According to the director, the film was his 'version' of Howard Hawks' Rio Bravo (*3), an immensely popular Hollywood western among spaghetti western writers and directors. The theme of the of the outnumbered lawmen is blended with the spaghetti theme of the warring factions: Mimmo Palmara and Furio Meniconi dispute the western town in true mafia style; there's even the story element of 'scarring the family' when one of them abducts the other man's marriageable daughter and has his men have their way with her. There are similarities to Massacre Time, which was also scripted by Dell'Aquila and Di Leo and featured a once feared gunslinger who has become a town drunk. Diehard genre fans might also think of that other permanently inebriated anti-hero from our beloved genre, El Puro. 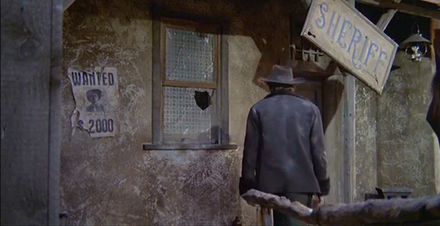 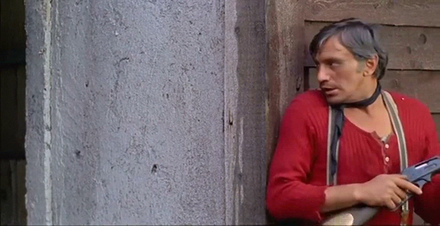 Knowing the reputation of these screenwriters, the script is a bit of a letdown. All the ingredients are there, but the theme of the warring factions is a little underdeveloped, and the background story of the family (and the hidden identity of one of the main characters) was far better integrated into the script of Massacre Time. We eventually learn who Sobiesky really is and why Ghidra was drinking all the time, but these revelations come too late to have any emotional impact. A Time and Place for Killing is an average spaghetti western, not great, but not bad either. Of course John Wayne's boots are far too big for Sobieski but Ghidra turns in a memorable performance as the town drunk. He perfectly knows what to do - and not to do - in a crucial scene like the one in which he pulls himself together. Most B-movie actors would overact and by consequence blow the scene. Ghidra knows that a small gesture and a grim face paint more than a thousand screams.

Simon Gelten is a long time contributor to the SWDb. "I'm not as old as Tom B. but I'm working on it. I hope to catch up with him by the end of the next decade.", he says. Simon saw all movies by Sergio Leone and several by Sergio Corbucci in cinema, most of the time in Eindhoven, the city where he was born. Currently, Simon is living in Turnhout, Belgium. Simon is active within the database as both Scherpschutter and his alter ego Tiratore Scelto.
Retrieved from "https://www.spaghetti-western.net/index.php?title=A_Time_and_Place_for_Killing_Review&oldid=115460"
Category:
Cookies help us deliver our services. By using our services, you agree to our use of cookies.