For years this film has been underrated due to more or less butchered releases, doing it no justice whatsoever and making it nearly impossible to follow the story line. At long last we now are blessed with an excellent uncut widescreen release from Kino Lorber. If you haven’t seen this release, you haven’t actually seen the film. But you will not see Stella Stevens like she is pictured on the Kino Lorber cover though, so just keep your hopes down! 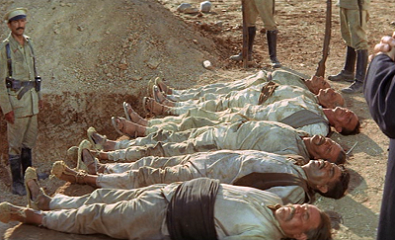 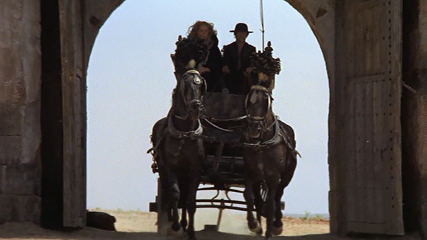 We are in Diaz’ Mexico in the turbulent years preceding the revolution. The rich people of the ciudad are gathering in church for mass. Outside, six dead peons are lying on the brink of a newly dug grave. The padre is making a short and harsh speech to the federales, about to bury the killed in unconsecrated earth. He congratulates the soldiers on their courage and curses the dead to burn in hell. At the sound of the church bell a group of armed peons, to which the killed might have belonged, attacks, killing the federales, then massacre everybody inside the church, the priest included.

Ten years later Bastardo is run by bandits, and they do no disgrace to the town’s name. Town’s "mayor" Don Carlos (Telly Savalas) is shooting and hanging people at his leisure. The man who led the attack on the church ten years back, an Irishman (Robert Shaw), has taken the place of the man he then shot, as the town’s padre, trying to mend his wrongs, although living in sin with a Mexican woman (Paloma Cela).

Out of the desert arrives a black-clad widow, Alvira (Stella Stevens), in a horse-drawn hearse driven by her allegedly deaf mute servant (Dudley Sutton), who is neither deaf nor mute, and as handy with a steel wire as with a shotgun. We first see her asleep in an open coffin, pale-faced with her hands crossed on her breast, like a Countess Dracula wanting for blood. And sure enough, no more has she sat foot in Bastardo, before she offers 20 000 dollars in gold for the dead body of the man who killed her husband.

The bandits are more than willing to trade anybody’s corpse for the gold. A woman who has her son and daughter wrongly accused and hanged for the killing, shouts from a parapet she knows the real killer, then the name Águila. (1) Soon we learn Águila is a legendary revolutionary leader, as the federales arrives led by a colonel (Martin Landau) on a mission to take him to Mexico City dead or alive.

The colonel is not unknown to the priest. It is his old comrade in arms from ten years ago, now working the government’s side. An old man (Fernando Rey), who has one son shot before his blind eyes, hoping to save the other, eventually points to the padre as being Agulia, recognizing him by the feel of his face. But things are not as they seem, and in a long flashback we learn some more.

Director Robert Parrish was no novice to the western genre, having two American westerns under his belt, Saddle the Wind (1958) and The Wonderful Country (1959). A UK-Spanish co-production by an American director with a non-Italian cast and crew, it is a Eurowestern. But it feels very much like a spaghetti; grim, brutal, cynical, violent and beautiful. Some SW regulars (Tito Garcia, Aldo Sambrell) add to this feel.

Like Leone in Giù la testa, Parrish places a disillusioned Irishman in insurgente Mexico. Parrish couldn’t have seen Leone’s film though. A Town Called Bastard was released in June 1971, Leone’s film only later this year. But when the Irishman tells Paco: We gave you money to buy guns, not wine and whores; it echoes Chuncho in Quien Sabe: Don’t buy bread, buy dynamite. Like Tepepa, it is more somber than the earlier Zapatas. Both Tepepa and A Town Called Bastard question the revolutionaries’ excessive, although not unprovoked, use of violence against the rich. They both deal with betrayal of the revolutionary cause, and not in a wholly condemning manner. Still at the end of both films there is new hope for the poor.

The music is written by Waldo de los Rios, an Argentinian born classical composer, who also made the music for Bad Mans River. (2) His music for A Town Called Bastard combines SW elements with modernist classical elements as well as electronic sounds. He wrote the song El Águila, but not The Battle of New Orleans (3) played in the almost surreal saloon dance scene, which starts out as the only lighthearted moment of the film, only to end as one of its more brutal ones. 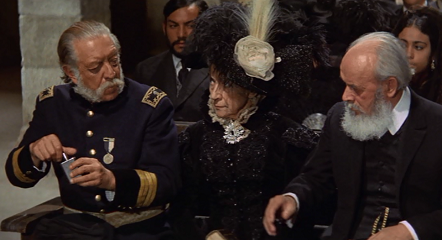 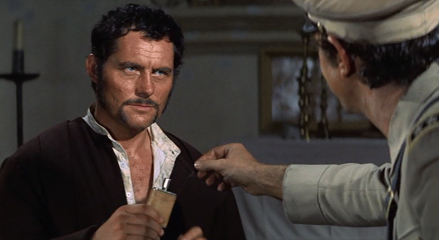 The film has a strong cast led by an excellent Robert Shaw and is well made in every department. Parrish, like Leone, uses both old photographs and flashbacks to tell his story. And even if the story might seem at some points confusing, Parrish doesn’t lose his grip along the road, it all comes together.

The Kino Lorber Studio Classic DVD and BluRay releases are region 1/region A. If you don't have the option, the Schröder Media DVD is the best alternative.

(2) The same year he made the music for A Town Called Bastard he also arranged and conducted the Spanish entry for the Eurovision Song Contest, En un mundo nuevo, which ended up in a respectable second position.

(3) The Battle of New Orleans is a traditional American country song about the British taking a hell of a beating at the said battle in 1815. It seems to have a new verse added for the occasion.

(4) According to Marco Giusti Irving Lerner took considerable part in the directing.

(5) Michael Craig writes in his memoirs that his scenes were shot a couple of months after the rest of the film was finished.

Retrieved from "https://www.spaghetti-western.net/index.php?title=A_Town_Called_Bastard_Review&oldid=105107"
Category:
Cookies help us deliver our services. By using our services, you agree to our use of cookies.