A Train for Durango Review 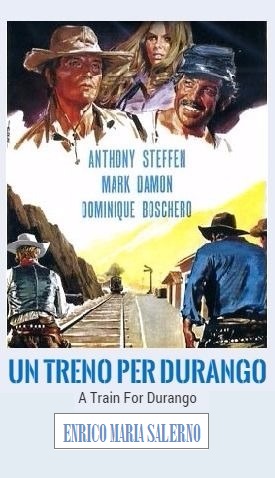 A Train for Durango

An interesting, lively, but noisy caper movie set in revolunairy Mexico. Steffen and Salerno are not so clever buddies in this movie that is mainly played for laughs, but nevertheless quite violent

A comedy western from the glory days of the genre, years before the Trinity craze took over. The original story was written by Duccio Tessari, who's also mentioned as one of the authors of the screenplay, but Ferdinando Di Leo has claimed that he had rewritten Tessari’s original story and that the screenplay was entirely his (*1).

Steffen and Salerno are Gringo and Lucas, two adventurers on their way back to Texas from Guatemala (where Steffen was shot in the behind). They sell their horses and guns to buy tickets for the train to Durango. On board is also a safe carrying a large sum of government money. While Steffen is flirting with a French mademoiselle (Dominique Broschero) and Salerno is sneaking up on passengers to steal their food, the train is robbed by three different gangs, led by the unholy trinity of El Lobo, Heraclio and El Jefe, who have joined hands for the occasion. The safe is stolen and the mademoiselle is kidnapped, but Gringo and Lucas, the only survivors of the massacre, accidentally find the two keys of the safe, and are now the only ones who can open it.

The remainder of the movie has the couple getting in and out of trouble while trying to get close to the safe. At various occasions, the two get help from a mysterious American (Mark Damon) driving around in a red car and blessed with the special gift to be on the right spot in the right moment. With a rapid succession of lighthearted and violent vignettes, it seems to herald the Zapata westerns in the style of Corbucci, but the atmosphere is more relaxed, less tense. In a traditional picaresque story the roguish protagonists – good-natured but lethal – use their wit to outsmart their enemies; in this movie the two are not so clever and more than once outsmarted by their opponents. A nice example (referring to a scene in For a Few dollars More) has Gringo and Lucas offering their help to the bandits. In Leone’s movie Colonel Mortimer was smart enough to show his proficiencies with the gun before he started talking about the safe, and he was also the only person capable of applying the appropriate techniques. Our two heroes have no guns, only two keys, and are helpless when the bandits put them up to their necks in the sand and start torturing them.

A Train for Durango is an interesting mix of styles; it's colorful, lively, but it's also uneven, not well-balanced and very noisy, with people shouting at each other while having conversations (probably the Di Leo factor, his polizioteschi are pretty noisy as well). The comedy is too silly for the drama, and the drama too dramatic for a comedy. For a movie that presents its story in light-hearted fashion the violence is quite extreme, with a train robbery resulting in mass murder and a bizarre 'Death Ring' scene, featuring a group of people gathered round a table, playing a Mexican variation on Russian Roulette. I had the idea that the Gringo part - played by Steffen - was written with Giuliano Gemma in mind. Steffen is not the most likely choice to play a Gemma character (*2), but apparently he picked up enough during the comedy classes given by Mark Damon to pull himself through (*3). Damon is his usual charming/slimy self as the American on wheels. But it’s definitely Salerno’s movie, it’s a pity that this fine actor (who dubbed Eastwood in Italian for the Dollar movies) wasn’t asked more often to play similar roles. Carlo Rustichelli’s score is as upbeat and lively as the movie itself. The traditional plaintive trumpet is only used during the build-up to the final duel.

Simon Gelten is a long time contributor to the SWDb. "I'm not as old as Tom B. but I'm working on it. I hope to catch up with him by the end of the next decade.", he says. Simon saw all movies by Sergio Leone and several by Sergio Corbucci in cinema, most of the time in Eindhoven, the city where he was born. Currently, Simon is living in Turnhout, Belgium. Simon is active within the database as both Scherpschutter and his alter ego Tiratore Scelto.
Retrieved from "https://www.spaghetti-western.net/index.php?title=A_Train_for_Durango_Review&oldid=131439"
Category:
Cookies help us deliver our services. By using our services, you agree to our use of cookies.