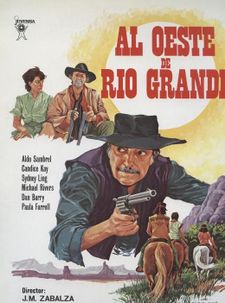 Made long after the Euro-western had fallen into disfavour, this must be one of the worst ever of its kind, even if, paradoxically, it also boasts one of its most original premises: one isolated incident serving as the basis for a run-through of frontier history. The incident affects a squatter whose leg gets caught under a fallen beam right beside the seaside, with the threat of the tide engulfing him unless he is promptly rescued. The victim’s wife (also Sambrell’s, she is played by Cándida López) runs in search of someone who will help them, and in the course of her long, initially fruitless journey, she will meet a cross-section of post-war Western archetypes: hanging judges, assorted outlaws, vigilantes, natives, Indian haters and bounty hunters, not to mention a melancholy, destitute old-timer whose voice-over commentary on recent times serves as a framework for the narrative.

As with Tunka, el guerrero (starring Joaquín Gómez Sáinz, here playing the role of a native), Al oeste de Río Grande would seem to have been conceived for children, to judge at least from the didactic script and the schoolmasterly anti-violence message. Nothing wrong with these intentions except that, as with other Zabalza films, the ineptitude of the results can’t be simply put down to the very low budget. This, in fact, actually yields aesthetically curious results in spite of itself, such as the Madrilenian locations with their unlikely fibreglass roofs. According to Sambrell, Zabalza was, not untypically, so drunk on set as to be barely able to function and this shows in the atrocious direction. It is obvious that no care was taken to create complex set-ups, other than those culled from other films, so several brief, easy-to-film shots were made and then jerkily strung together in the editing room. The overall effect, in its incoherence, comes unwittingly close to the staging of a dream.

With an eye to his past career, Zabalza reuses scenes from his previous filmography as well as several music cues by the mysterious Ana Satrova that had featured in Plomo sobre Dallas, 20.000 dólares por un cadaver and Los rebeldes de Arizona, the three features the Basque filmmaker made back-to-back in the early seventies. And with an eye to the future, the director also makes use of the orange-tinted lens more prominently in display in his next and last work, La de Troya en el Palmar, a satire starring Cassen that may well be Zabalza’s best film. To return to Al oeste de Río Grande, one may add that the unfamiliar voices on the Spanish soundtrack seem to indicate that much of the cast dubbed themselves, this being a rare occasion in which Sambrell’s somewhat “mid-Atlantic” intonation could actually be heard in a film made in his own country.

Retrieved from "https://www.spaghetti-western.net/index.php?title=Al_Oeste_de_Rio_Grande_Review&oldid=93710"
Categories:
Cookies help us deliver our services. By using our services, you agree to our use of cookies.