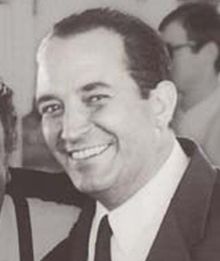 Italian producer Alberto Grimaldi originally trained to be an attorney and got his start in cinema as a lawyer. Seeing potentially lucrative opportunities in film production, he started his own production company, P.E.A. (Produzioni Europee Associate), in 1962 and released his first feature film, L'Ombra di Zorro the following year. In the late 1960s, Grimaldi made a fortune with such spaghetti westerns as For A Few Dollars More (1965) and The Good, The Bad, and the Ugly (1966). Grimaldi went on to produce highly acclaimed films for some of Italy's most respected directors including Fellini and Bertolucci.

The following 29 pages are in this category, out of 29 total.