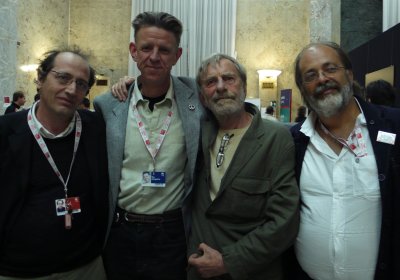 "Whilst interviewing Alex Cox on the imminent release of his new book, 10,000 Ways To Die, I took the opportunity to urge him into sharing his personal Top 20 list with us here at the Spaghetti Western Database. If truth be told he didn't take much convincing. Like most fans he was only too happy to list the films which have struck a particular chord for him over the years. Alex's book goes into detail from a director's and fan's perspective on the strengths and weaknesses of a bevy of Italian Westerns set out in chronolgical order and is a must read for any enthusiast but if you want a brief hit list of which ones he recommends most highly then this list is for you."--Phil H 17:17, 28 April 2009 (UTC)

This page is exclusive content. No unauthorized reprinting, republishing or other use without prior authorization or proper referencing.