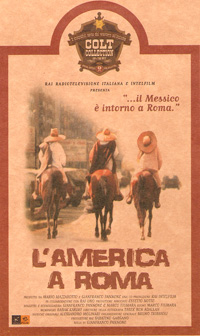 Documentary on character actors of the Spaghetti Western genre. Shot as a though a group of original Spaghetti Western actors are trying to get one last Spaghetti Western film made, L'America a Roma is an entertaining documentary that takes a more sentimental/nostalgic look at the genre. One scene shows a large group of actors watching a video of "Rattler Kid" that Guglielmo Spoletini's son sent his father from America, it's quite moving seeing Spoletini watching himself as a young man. Lots of old locations are shown, you even get to see inside Cinecitta as it is today (abandoned). It's great to see all the familiar faces as they are now, even Carlo Lizzani is in it.

Retrieved from "https://www.spaghetti-western.net/index.php?title=America_a_Roma,_L%27&oldid=129265"
Categories:
Cookies help us deliver our services. By using our services, you agree to our use of cookies.