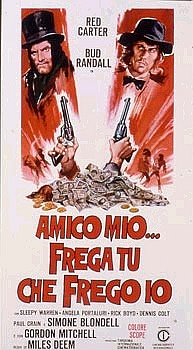 Two 'friends', Jonas and Mark, who live by cheating and squandering their money in saloons meet a crazy old man who tells them that gold has been discovered in the Rocky Mountains. The whole town moves, with dreams of becoming rich, but they are bitterly disappointed when on their way home they are robbed by Mulieta and his vicious gang of outlaws. Jonathan and Mark are spurred into action and decide to fight Mulieta's gang and retrieve their gold.

Prolific filmmaker Demofilo Fidani directed this dreadful spaghetti western under the pseudonym "Miles Deem." Ettore Manni (using the name Red Carter) plays Jonas Dickerson, a two-bit conman who discovers gold in Dead Man's Gulch along with his partner Mark (Bud Randall). Gordon Mitchell turns in an amusing performance as the sleazy Muller/Mulieta, who tries to turn the town into a den of vice before being brought down by Jonas and Mark. Typical Fidani touches, such as a sheriff with hemorrhoids, do not make the film any less dull, but a familiar cast including Simone Blondell, Dennis Colt, Carla Mancini, and Sleepy Warren do make it a bit less painful. Rick Boyd (aka Federico Boido) also appears.

Retrieved from "https://www.spaghetti-western.net/index.php?title=Amico_mio,_frega_tu..._che_frego_io!&oldid=130361"
Categories:
Cookies help us deliver our services. By using our services, you agree to our use of cookies.