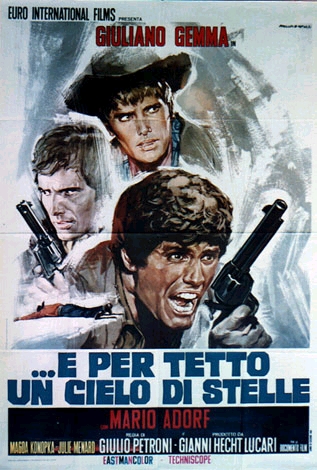 I've been on a bit of a Giuliano Gemma kick lately. It's really amazing how good the guy can be, even when he's not always in the best film. As I've now seen films with Gemma both in his own native Italian voice and and English overdub, I've also concluded that whoever does his English overdub does a fantastic job as well, as though the man really knows Gemma, even though the voice isn't similar. It's kind of like he's created an alternate persona of Gemma or something.

So last night, I watched Giulio Petroni's And For a Roof, A Sky Full of Stars, which has to be one of the most poetic titles to grace the genre. However, the film is moreso a light-hearted buddy film that pales in comparison to Petroni's masterpiece, Death Rides a Horse.

The film opens with a raid on a stagecoach that ends in a massacre. The outlaws are looking for someone. After they leave, we see Gemma's character named Tim (or Billy, his real name) comes across the bodies. Another guy, Henry (Adorf) happens to be there, and helps Tim bury the bodies. They later roll into town, Tim helps Henry in a poker game (when he reveals an opponent is cheating), and the ensuing stereotypical saloon fight begins. As they make their way to safety, Henry reveals to Tim that he has a bag of gold. Tim convinces him to put it in a nearby bank, but it's really a scam. So, the conflicts begin, in which Tim scams him yet another time, and we learn that he's being pursued by the Pratt family, for he killed two of the sons in a gun battle. They eventually make it to Henry's inherited run-down ranch, where they meet the Pratts in a final showdown.

As Marco Leone aptly pointed out in his review of this film, the film starts off dark and serious, but quickly moves away from that into much lighter fare, never really living up to the tone it set in the beginning. It doesn't devolve to the mindless silliness of a typical Hill/Spencer film, but there's just not enough grittiness to the film to make it really engaging.

The cast is indeed a good one. This is the first film I've seen with Adorf; I like the guy, he's a good actor, playing the not-too-bright foil to Gemma quite well, and the two actors did have some good chemistry. But in the attempts to keep it lighthearted and semi-comical, there are too many plot devices that just really stretch credibility, like Gemma's character getting a widow drunk and bedding her right after her husband's funeral. More unbelievable is how Henry repeatedly trusts Tim, after being scammed out of his life's savings and another scam that soon follows; by the end of the film, he's practically giving half of his ranch to Tim. Had I been Henry, I would have put a bullet between Tim's eyes right after the first scam, no questions asked. I certainly wouldn't have kept hanging around with him and eventually moved in with him.

That said, this wasn't really a bad film by any means. Its main failing is that it doesn't want to really venture too far into either comedy or rough 'n gritty territory, which makes it a bit frustrating to watch. It is well acted, ably shot and directed, and has a decent Morricone score. The Japanese SPO version I watched looked and sounded pretty decent. If you're a Gemma fan and you can deal with a film that doesn't take itself too seriously (sometimes to a fault), then you might enjoy it. But it's hardly a must-see, either.

Retrieved from "https://www.spaghetti-western.net/index.php?title=And_For_a_Roof_a_Sky_Full_of_Stars_review_by_JD&oldid=115493"
Category:
Cookies help us deliver our services. By using our services, you agree to our use of cookies.