And Now... Make Your Peace With God! 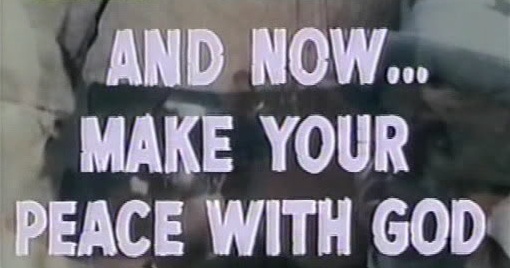 As I prepare a book on Italian westerns, I am navigating my way back through the genre. And as I do, films come to light that may have not gotten their just due they deserved from me the first time around. And Now… Make Your Peace With God (Ed ora... raccomanda l'anima a Dio! 1968), is surely one of those films that deserve some more love and attention from not only me, but genre enthusiasts also. My first viewing of this film back in 2007, was noted in my book as a tedious, murky affair. But as I have aged, and my levels of expectations have wavered a bit, this time through was a more rewarding experience. What makes this film so much better during this view is that the three main characters remain loyal to one another and there is never a hint of a double cross until near the end. With so many of these films littered with repetitious double-crosses and deception… When a group of characters stays true to one another, it’s always a breath of fresh air. One film in the same vein as And Now… Make Your Peace With God is the excellent Italian western, 5-Giants From Texas (Cinque della vendetta, I, 1966), which is a bit thin on action at times, but is an excellent character driven tale of friends banding together to avenge the death of a friend. 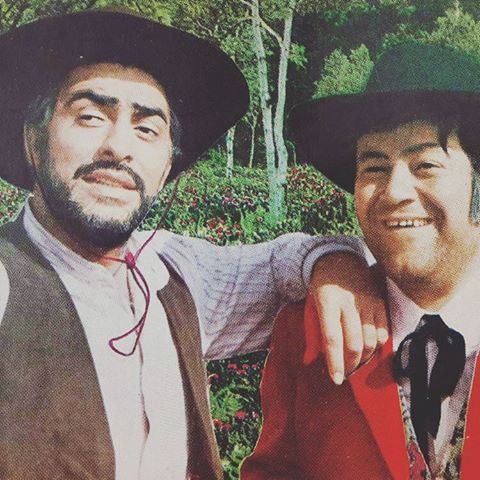 Anyone who has seen their fair share of the director Demofilo Fidani’s westerns knows that he likes to jump right into the action at the beginning of his films. And Now… Make Your... Peace With God is the architect of those jumping straight into the action as its Demofilo Fidain’s first directorial outing. The film starts right out with a vicious brawl in a saloon featuring a one-man wrecking crew in the form of a man named Stanley Maserick (Mohammed Fardin). The stage that Stanley was on had stopped at the saloon on its journey to Denver City. Also, on the stagecoach are two comedic sidebars and Steve Cooper (Fabio Testi), who is introduced as a dandy looking fellow, who avoids this early brawl, but would show as the film progressed, that he was also a man to be reckoned with not only his fists but his guns also. In fact, the film displays numerous punch-ups, and all are excellently staged and have large contingents of participants and some well-filmed gun battles. As the stage makes its frenzied way to Denver City it is set upon by a group of bandits. Sanders (Jeff Cameron), the third part of the eventual threesome of vengeance seekers, helps the stagecoach riders when he with a saddle on his back, after a long trek on foot shoots down some of the bandits from his rocky perch. Eventually, the three men decide after questioning each others motivations for going to Denver City to band together to get their vengeance. Steve Cooper is after Jonathan Clay (Ettore Manni) who along with his goons had his whole family killed; Steve only escaping when the butler of his affluent family whisked him away to France where he grew into manhood. Stanley Maserick is after the unknown assailants who robbed him of his gold and after being dragged behind a horse is thrown into the river to die. Sanders also has a vendetta, but his vengeance angle is never revealed. The three are not only fighting one evil town boss in the form of the evil puppet Johnson (Calisto Calisti) but Jonathan Clay, who is the really the mastermind to all the happenings in Denver City. 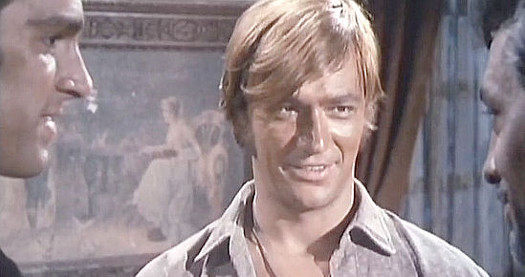 Each of the men fights independent and together against the villains and form a tight cohesive unit, that remains loyal to one another. The villains are all introduced properly and do enough dastardly deeds to instill dislike among the viewer. There is plenty of gunplay and some wonderful stunts that really adds another dimension to this film. The ending is outstanding and one of the finer ones the genre has to offer and while thinking of adding a double cross to foul up the whole of the film, relents and allows a proper ending. A film quite honestly with likable characters in the three revenge seekers that could have easily born out a sequel or two. Stanley is the two-fisted tough, who can whip a whole saloon full of men, but is also conscientious and loyal. Steve Cooper is the dandy of the bunch, with his nice clothes and his French cigarettes, but proves his mettle in the brush-ups and the gun battles with cold aplomb. Sanders is the lover in the bunch and catches the eye of the lovely Suzanne (Cristina Penz), who after a bout of vigorous lovemaking, tells all the secrets she knows of her admirer Johnson and the man he works for Jonathan Clay. 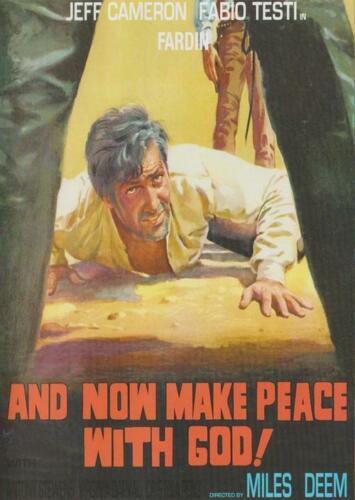 The direction by Demofilo Fidani is excellently handled for the most part, excepting a few hiccups along the way. The story was written by Demofilo Fidani and the screenplay by Fidani and his wife Mila Valenza. The wonderful soundtrack was written by a Bixio (Franco Bixio), Frizzi (Fabrizio Frizzi) and Tempera (Vincenzo Tempera). Jeff Cameron after getting his start in Peplum films transitioned over to the Italian westerns and was a mainstay in the genre until the film craze died out. Cameron is probably best remembered for his turns in this and other Fidani films including Stranger Say Your Prayers (Straniero... fatti il segno della croce!, 1968), Shadow of Sartana… Shadow of Your Death (Passa Sartana... è l'ombra della tua morte, 1968) and A Fistful Of Death (Giù la testa... hombre, 1971). This is the legendary Fabio Testi's first credited role, as he had appeared in two uncredited turns in: Gun Shy Piluk and the crime-thriller Two Eyes To Kill. Testi would go on to become one of the biggest names in Italian cinema and is still active. The film was co-produced between Italy and Iran. That odd combination is the only co-production of those countries in the Italian western genre that this writer can recollect and is why Mohammed Fardin, who was a popular Iranian actor appeared in this oater. Fidani’s next western Stranger Say Your Prayers was a good film fueled by excellent cinematography and a great turn by Charles Southwood. Fidani’s third film Shadow of Sartana… Shadow Of Your Death is a bizarre cut and paste job, cobbled around some newly shot scenes showcasing Jeff Cameron walking endlessly about with a saddle on his back, various riding sequences and being inserted into situations from the first two films. There is a point after the eight-minute mark where all hell breaks loose and bits and pieces of the first two films are randomly inserted into the action, giving the film a surreal feel. And while Cameron's character in And Now... Make Peace With Your God is never shown losing his horse, in Shadow Of Sartana... Shadow Of Your Death his horse is killed by a bandito and he eventually arrives back to the scene he was introduced to the viewers in the film And Now... Make Peace With God!. 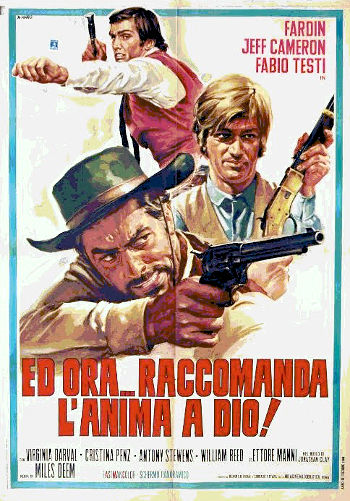 Article written by Michael Hauss, author of reviews and articles for Monster magazine, We Belong Dead, Multitude of Movies, Divine Exploitation, Exploitation Retrospect, Grindhouse Purgatory and Weng's Chop and various online sites that includes Diabolique, Multitude of Movies, Theater of Guts and the SWDb. He has a love of film with particular interest in the Spaghetti Western and Horror genres. Michael lives in the United States where he resides with his daughter and their two cats Rotten Ralph and Fatty boo-boo.
Retrieved from "https://www.spaghetti-western.net/index.php?title=And_Now..._Make_Your_Peace_With_God!&oldid=112398"
Category:
Cookies help us deliver our services. By using our services, you agree to our use of cookies.