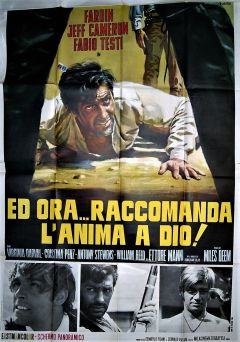 Last night, I was lamenting the fact that it's been a while since I'd seen a really good spaghetti. And so, I was going through the reviews section of this site and started reading some reviews, and when I got to the review for Demofilo Fidani's One Damned Day at Dawn, Django Meets Sartana!, I really enjoyed reading it, because it was sort of one of those "so bad, it's good" kind of films, as I had quite a bit to say about it, as opposed to the plain mediocre-to-bad films of which I write rather brief reviews. So, I took a look in my collection and found another Fidani effort, 1968's And Now... Make Your Peace With God. Well, let's just say that after seeing it, it's still been a while since I've seen a good spaghetti, but there's still a lot to write about in this one, namely those "Fidani-isms". But first, a summary...

The film starts off with a few people riding in a stagecoach, which gets ambushed by a gang. Miraculously, someone else, hiding above, wipes out much of the gang, and two of the passengers, Steve Cooper (Fabio Testi), and Stanley Mazury (Jeff Cameron) take out a few bandits, as well. The resucer, Sanders (Mohamed Ali Fardin, interestingly, one of the most popular Iranian actors until the 1979 revolution) rides along with the stagecoach, which is heading to Denver City. Along the way, Steve and Stanley share a smoke, and we see some flashbacks, where Cooper's family is wiped out by a man named Johnathan Clay, and we also see one where Stanley gets his gold robbed from him, also from the Clay gang. 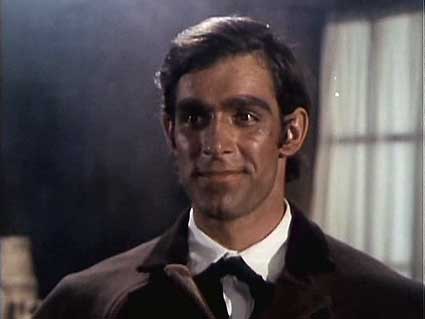 Sanders, when they arrive in town, reveals he's also in town looking for something, but we never really find out what. The town has a corrupt candidate for sherriff, named John Corbett, who, incidentally works jor Jonathan Clay. Clay finds out Sanders and Cooper are in town, and a lot of mayhem ensues. There's an overly long gunfight, but unsurprisingly, Cooper gets Clay to sign papers returning his inheritance, and then kills him. Sanders also manges to find the gold and returns it to Stanley. The end. 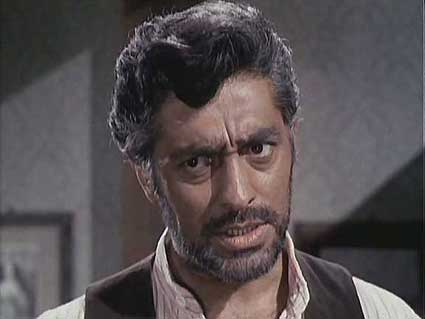 All in all, not surprisingly, a pretty run-of-the-mill plot. Fidani's films somtimes remind me of what one would see if some 1st year college film students got together and made what they thought a spaghetti western was supposed to be. Testi and Jordan put in good performances, no small feat, considering the awful dialogue they're forced to speak. The soundtrack by Bixio, Frizzi and Tempera is decent. But about those Fidani-isms....

Now, fans of the genre are quite familiar with Fidani's reputation as, let's not mince words here, a hack. He directed 12 spaghettis, and they tend to be poorly written, highly derivative and wholly unexciting affairs. But his, shall we say, flagrant disregard for continuity, quality, acting, dialogue and detail often make his films so bad they're entertaining. Ok, so in just about every Fidani film I've seen, there's several things that always pop up. This one's no exception. There was one of those horrendous songs sung by the saloon gal, this time with a really bad, breathy, thick French accent. Even the guys she was teasing as she was singing looked annoyed. There was also some scene that takes place as Cooper was sneaking around at night, and you hear the same 10-second coyote howl loop, over and over, and over. The exact same loop was used exactly the same way in the aforementioned Django/Sartana film, also while someone was sneaking around at night. Also, in the flashback scenes, there is a really bad, short echo on the sound, very distracting... I guess it's his way of making sure we know it's a flashback. There's the usual unexciting saloon brawl, this one only slightly entertaing because a fat guy attacks people with his belly and his ass. Then there's this gem... 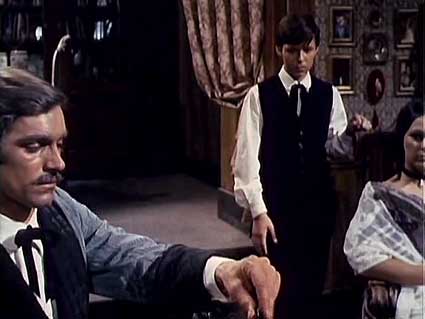 Spray a little gray hairspray on Testi, and all of a sudden, he's his own father in the flashback.

But without fail, one of the funniest things I've ever seen in a spaghetti was when two girls were brawling it out in the saloon, fighting as they fall down the stairs. Look at those biceps!: 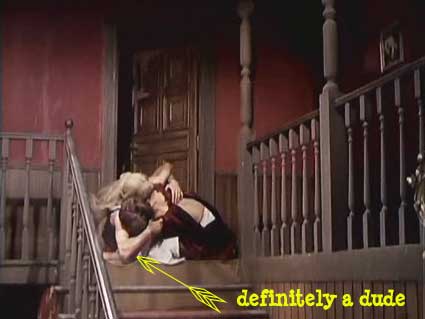 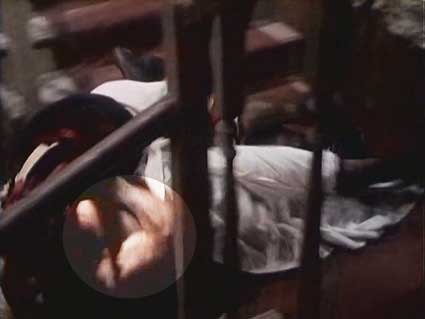 Some serious biceps there, as if the really bad wig didn't tell you something wasn't quite right. So would I recommend this film? Hell, no, unless you're into the humourous aspect of really inept filmmaking. Interestingly enough, the IMDB entry for this film lists it as an Italian/Iranian production, but other than the actor named Fardin, I don't know of any Iranian connection to this film.

Retrieved from "https://www.spaghetti-western.net/index.php?title=And_Now..._Make_Your_Peace_with_God_Review_(by_J.D.)&oldid=132681"
Category:
Cookies help us deliver our services. By using our services, you agree to our use of cookies.