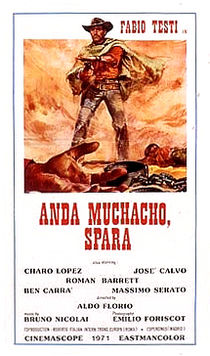 With his 2nd (and last) SW Anda Muchacho, spara director Aldo Florio successfully reinserted the gritty and violent elements of the early phase of SW making into the genre, in a time when comedy was already taking over. Shot mostly in the western town set of Hoyo de Manzanares, where Fistful of Dollars was made, the film uses more than one element of Leone's classic without being a direct copy. An outstanding idea was the dropping of a few parts, which are important for the understanding, and then handed in at a later moment to reveal some secrets. Unfortunately the audience didn't appreciate the effort. // by Stanton

Soundtrack was re-used (along with others) in the 1986 film Scalps, venganza india