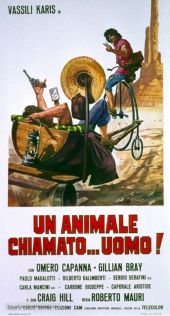 Clever sharpshooter Bill and his dim-witted buddy Johnny bicycle into Silver City to participate in the annual shooting tournament. Usually, corrupt rancher Forester wins, but this time he's beat by Bill, and he's not happy about it. Bill wins 500$ and a night with beautiful Saloon dancer Yvette, who's really a doctor but can't get any medical work in town. Since Bill and Johnny have already gotten in the way of Forester, they decide, with a little help from Yvette, to try to free Silver City from his grip.

Retrieved from "https://www.spaghetti-western.net/index.php?title=Animale_chiamato_uomo,_Un&oldid=136630"
Categories:
Cookies help us deliver our services. By using our services, you agree to our use of cookies.