“Styled and paced like a Leone western”, it says on the back cover of the Mr Bongo Films’ release. Well, that’s an exaggeration. It is slower paced and more styled, some will say too styled; long takes with the camera hardly moving, people drifting in and out of the image like in a Michelangelo Antonioni film, other scenes more like Brechtian theatre. But now I’ve told you, so think no more about it. When it gets going, the pure rage and raw violence of this impressive Brazilian film will make it worth your while. 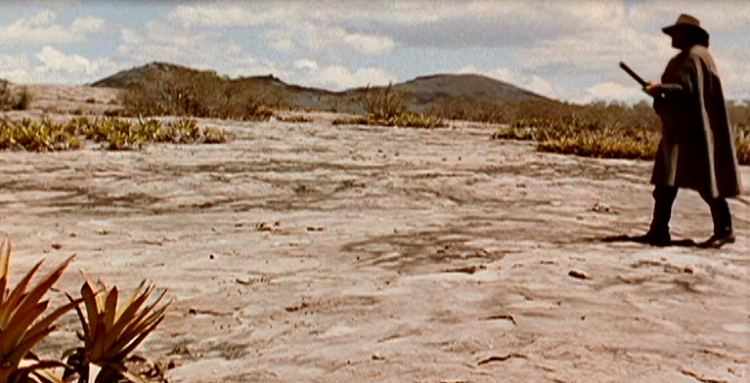 We are in in the years after the World War II in the city Jardim de Piranhas (yes, it means what you think) (1), run by a great landowner, the blind coronel Horacio. The cangaceiros believed extinct are back in Brazil’s northeast, living in the hills outside the city in a community of impoverished peasants with a mystic orientation. These beatos are spiritually guided by Dona Santa, a young black-haired woman in a white dress, believed to be a saint. Their leaders are captain Coirana, who dreams of avenging the great cangaceiro martyrs killed some years earlier, and his next in command is Negro Antão, a black man clad in red.

The coronel’s protégé Doctor Matos, who by the way is cuckolding the coronel, brings back Antonio das Mortes, who has slain more than a hundred cangaceiros singlehandedly. In the traditional “duel of the Evil Dragon against the Warrior Saint” fought whit blades, Antonio wounds Coirana, but Dona Santa stays his hand from dealing the death-stroke. Antonio, who is haunted by his past and denied blessing in ten churches, is drawn to her for redemption. He stays with the beatos and is deeply moved by them; eventually sides with them. Now the coronel calls inn a truckload of jagunços, hired killers, led by his trusted man the vicious Mata Vaca, to clean up the mess. 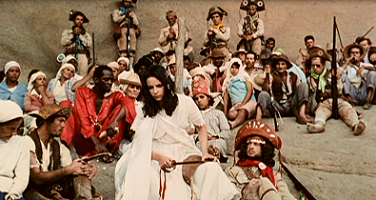 Antonio das Mortes is called an “anti-capitalist mythological adventure” (2). Still, it is far from a propaganda film; the political message is subtly delivered. Unlike another genre film released later the same year, O’Cangaceiro, we are not confronted head on with American capitalism brutalizing the Brazilian countryside. (3) More incidentally we learn that Matos plans building industry in Garden of the Piranhas, the money coming from outside. And for these people to invest, the North East’s reputation for violence has to end.

It is the second film by Glauber Rocha with Antonio das Mortes. It won him a shared best director’s prize at Cannes in 1969. Rocha was by that time the ideological figurehead of his country’s underground Cinema Novo movement. The first one, Black God, White Devil, is an entirely different kind of film, in black and white, more low-keyed but also more disturbing than the sequel, and the story told from a different point of view. It ends with Antonio killing the last of the cangaceiros, the feared Corisco, a scene repeated in the flashback opening of Antonio das Mortes. 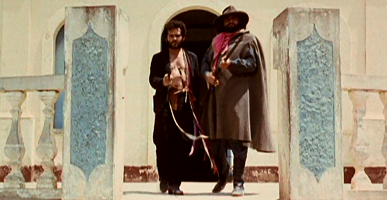 Black God, White Devil was made in 1964 and has of course no kinship to the filone taking off in Italy the same year, or to American westerns, for that matter. However, when Rocha made Antonio das Mortes he set out to “recover the atmosphere” of the American western (4), but he ended up with something more like a spaghetti western. At least it starts out like a spaghetti western, and it ends like one. In between, it is something else. Rocha himself said: “I make films about the Third World because I am from the Third World. If Antonio das Mortes were an American film, it would probably be a western, or if Japanese, a Samurai film.” Kevin Grant comments “[h]e might have added Euro-western had the film been Italian.” (2)

And of course Rocha could no more have avoided the influence of the Italian westerns than he could the anti-American pro Third World politics surging in his generation. Only in the same year as Antonio, 23 Italian westerns were released in Brazil. (2) Obviously Antonio in turn influenced European westerns, especially La collera des ventos made the year after, about another hired killer who eventually turns against his principles. And in Italy Antonio das Mortes was presented as the real thing, with Antonio posing on the posters like any other bounty hunter. (2)

The film’s Brazilian title is Dragão da Maldade contra o Santo Guerreiro (The Dragon of Evil against the Warrior Saint). As explained in the opening texts, Saint Georg, the most popular Catholic saint in Brazil, has an analogue divinity in the black African-Brazilian religions: Oxóssi. Both are called Santo Guerreiro, the warrior saint, by the people. And by the way, in the film as in the tale, the evil dragon is slain in the end.

(1) There is actually a place with this name in Brazil, in Rio Grande do Norte.

(3) And unlike O’Cangaceiro it is not a Zapata western. Some other films seem more likely to have influenced Rocha: La resa di conti and Il grande silenzio.

Retrieved from "https://www.spaghetti-western.net/index.php?title=Antonio_das_Mortes_Review&oldid=101301"
Category:
Cookies help us deliver our services. By using our services, you agree to our use of cookies.