Any Gun Can Play DVD Review 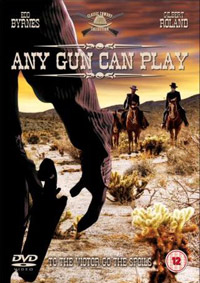 A bank’s gold shipment of $300,000 is being transported by train accompanied by an army troop and a bank official but is held up and the cash carried off. But the treacherous bandit who makes off with the loot is killed before he can tell where he has stashed it and this leaves a small group of individuals vying against each other in search of the riches. Monetero (Gilbert Roland) , the bandit leader , Stranger (George Hilton), the bounty hunter and Clayton (Edd Byrnes) the bank official are all caught in a constant game of cross and double cross as they attempt to outwit each other but the army is still on the trail and so is a mysterious insurance agent. But who willwin out and claim the ultimate prize?

Any Gun Can Play is a caper movie set in the west and was clearly made on a reasonable budget for the time (you don’t see trains in a Fidani) . The cast is a good one and utilises the talents of Roland and Hilton especially well. Even Ed Byrnes, not always at home in the Italian west, fits fine here and with Castellari’s comfort in the large scale action scenes the overall result is sometimes excellent and nearly always entertaining. The one down side for me is the obligatory Castellari fist fight scenes which are played against comic music and are overlong and unnecessary but this is, in truth, a small criticism as they are not too intrusive for the most part and are reasonably well suited to the generally tongue in cheek tone of the film. This light hearted approach runs throughout the picture and is illustrated well in both the opening and closing scenes. In the pre credit sequence Hilton confronts three tough guy lookalikes for Clint Eastwood, Lee Van Cleef and Franco Nero in a very early and well constructed act of self reflection on the cycle and at the close we have a three way showdown a la The Good, the Bad and the Ugly; this time in the crumbling ruins of an old house rather than a grave yard but the parallels are obvious enough. Castellari maintains the balance pretty well throughout so the film is fun without stepping over the line into buffoonery and falls into the category of a Spaghetti Western you could watch with the family without being bored or worried about any surprise nastiness popping up.

Any Gun Can Play has had a number of releases in the U.S. ; as a single from VCI as well as in cheap box set collections from Mill Creek and St Claire. But this Pegasus Entertainment release is its first in the UK as far as I’m aware. In comparing it to the afore mentioned Region 1 discs it looks to have had the same source but, unlike their Stormrider release seems to be actually marginally better in the picture quality. There is not a great deal of difference but, to my eyes, has slightly better colour saturation. Either way, for a lower priced DVD it is very watchable and will be welcomed by any UK based fans who haven’t already picked this title up from overseas. On the down side, I noticed some quite distinct audio hissing but this wasn’t bad enough to put me off or ruin my enjoyment of what is a welcome release in the British market.