From The Spaghetti Western Database
(Redirected from Any gun can play)
Jump to: navigation, search 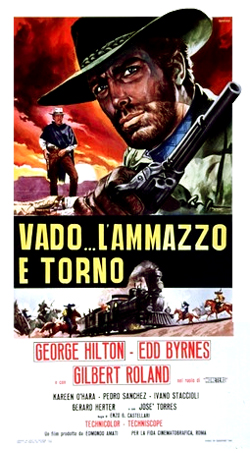 A bounty hunter accidently witnesses a train robbery, executed by the Mexican bandit he was trailing. He starts to have second thoughts about killing the man, because there seems to be more money involved and it could be wiser to team up with him. After the Mexican is sentenced to death the bounty killer saves him at the last moment, not knowing that he had a partner in crime for the train robbery, a treacherous bank employee who is also after the gold.

With three men vying for a hidden treasure, double-crossing each other almost constantly, the film rips off the famous premise of The Good, the Bad and the Ugly, but it’s all done with a wink of the eye and without any possible disrespect. This is an early example of a spaghetti western that doesn’t take itself too seriously. Still, the first half is rather straightforward and violent and it’s only halfway that the movie takes an unmistakably comical turn with a hilarious fistfight between Byrnes and Hilton (in his underwear!). - Scherpschutter

The film is most famous for its opening scene in which the “new” hero is introduced by killing 3 bandits, who look suspiciously similar to the "old" heroes: Eastwood, Nero and Van Cleef. The rest of this enjoyable western is also mostly tongue in cheek, but is partly marred by too many silly fistfights. This was George Hilton's first typical role, which set the standards for his later SWs with Giuliano Carnimeo, especially the Hallelujah films. The original title "I Go, I Kill Him and Come Back" was directly taken from GBU (to Leone's displeasure), and was varied by Castellari on his later SW, Kill Them all and Come Back Alone. / by Stanton

Retrieved from "https://www.spaghetti-western.net/index.php?title=Vado..._l%27ammazzo_e_torno&oldid=138428"
Categories:
Cookies help us deliver our services. By using our services, you agree to our use of cookies.