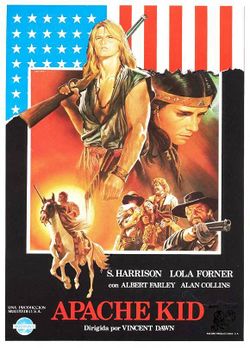 Spaghetti westerns featuring Indians have never been very popular, but then, in the eighties, Bruno Mattei - a jack-of-all-genres (some would add: and master of none) all of a sudden made two, Apache Kid and Scalps.

Apache Kid opens with a murderous attack by Southern renegades on a Mormon wagon train; the Mormons had already made friendship with the Indians, and all men, women and children, red or white, are killed, except for one woman, who is saved by a group of Apaches arriving in the last minute (1). She dies while giving birth to a son, who is adopted by the chief and raised as if he were his own flesh and blood. Because of his pale blond hair the boy is called Shining Sky. The chief's own son, Black Wolf, and Shining Sky grow up together, and eventually become inseparable, but then a beautiful young squaw comes between them, the long-legged, sharp-nosed Rising Sun. When Black Wolf is accidently killed during a game that got out of hand, Shining Sky is forced to leave the tribe and sent to the world of the white people. He's hired by a friendly horse trailer, but also encounters a group of cutthroats who plan to annihilate the Indians because they are "in the way of progress".

When it was released theatrically, the film makers pretended it was a fateful adaptation of historic events. Most likely Apache Kid is (very) loosely based on the historic character called Apache Kid, a white kid captured by Indians at a very young age, who became a street orphan in army camps after being freed by the US army. The character of the sympathetic horse trainer seems based on Al Sieber, the Chief of Army scouts who more or less adopted the kid (2).

Sebastian Harrison is the son of muscle man (and star of many a peplum and spaghetti western) Richard Harrison. Both men would also be involved in the writing of the twin movie Scalps, but have no active part in the production of it (Richard Harrison couldn't finance it and then sold his rights). Scalps is the better of the two movies, mainly because it has a more engaging story. The storyline of Apache kid is simple, and yet the script often feels disjointed; soap opera scenes of two boys growing up together and romantic interludes in David Hamilton style are alternated with scenes of excessive slaughter and torture. It feels more like an exploitation movie than a spaghetti western; it's not excessively gory, but a pregnant Mormon woman is kicked in the groin, the kid's left arm is broken by repeated kicks and Rising Star is beaten up severely by several men and subsequently shot to pieces. All in close up. The ending is downright confusing.

Mattei was active in horror, Nazi exploitation, nunsploitation and various other trash genres, often in collaboration with his buddy Claudio Fragasso (several sources list him as co-director for this movie too). In the eighties he tried to revive both peplum (I Sette magnifici Gladiatori, 1983) and the spaghetti western, with little or no success: his films were more trash than cash. Young Harrison is tall, strong and good-looking, but ineffective in the lead. Lola Forner, miss Spain in 1979, is probably best known for her appearances in a couple of Jackie Chan movies. Cinzia De Ponte is the movie's second beauty and the kid's love interest in the white man's world. Charly Bravo almost steels the film from the kid and his cuties as a particularly nasty bandit; he's also a sort of miracle man: in one scene he loses an eye, in the next he aims his gun with the eye that's no longer there.

Video: The film is shown in its original aspect ratio; quality of the image varies from scene to scene, overall the transfer is watchable, but it's quite hazy and often there's a red shimmering, as if we're watching the movie through a red veil. As a result faces look too brown or red (luckily it's a film featuring Indians). Some wildlife stock footage is used and the quality of it is extremely poor; one scene offers a snow leopard, more than just a couple of thousand miles from home.

Audio: The audio comes in three different tracks, German, English and Italian. The English track sounds a bit shrill (especially the music) and I found the German track more pleasing to the ear. The best track however, is the Italian one; it favors dialogue over ambient sound and the voices sound more natural than on the other two tracks. Unfortunately there are no subtitles, so unless you understand Italian, you'll have to settle for one of the other two tracks.

Simon Gelten is a long time contributor to the SWDb. "I'm not as old as Tom B. but I'm working on it. I hope to catch up with him by the end of the next decade.", he says. Simon saw all movies by Sergio Leone and several by Sergio Corbucci in cinema, most of the time in Eindhoven, the city where he was born. Currently, Simon is living in Turnhout, Belgium. Simon is active within the database as both Scherpschutter and his alter ego Tiratore Scelto.
Retrieved from "https://www.spaghetti-western.net/index.php?title=Apache_Kid_Film/DVD_Review&oldid=122386"
Categories:
Cookies help us deliver our services. By using our services, you agree to our use of cookies.