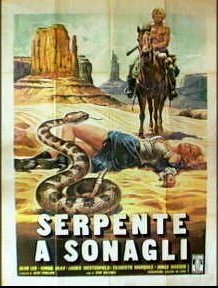 A story of two men, one young, one old, wandering through desert towns picking up dead bodies for burial, when they are unable to find any they make their own! An orphaned infant (Johnny, the young one) was snatched from the jaws of death by the territorial undertaker (Applebee, the old one) and the youth grows into manhood as a deadly gunfighter. A beautiful woman captures his heart but her outlaw lover stands in the way.

Shown at the 1971 Venice Film Festival as Arde, baby arde the film was originally shot in English and according to AMG was re-edited and not released until 1974.

A Mexican western co-produced by an Italian company and filmed in an unmistakably SW style, Arde, baby arde pretty much remains an unknown film. It has style and it has several promising ideas, but this highly incohesive film seems to come from at least 3 different screenplays and fails to bring anything together. A truly strange and weird watching experience.