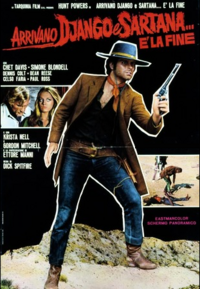 Django and Sartana are two characters who have won their spurs in spaghetti western land. Trash director Demofilo Fidani put both men in one and the same film twice in 1970. Half of the output is called Arrivo Django e Sartana… è la fine. Hunt Powers is a (bad) joke compared to Gianni Garko (the original Sartana) en Franco Borelli isn’t fit to hold a candle (let alone a machine gun) to Franco Nero (the original Django). But come on, who cares about those things? I don’t, that’s for sure. The English title even promises us a real “showdown in the west” starring this super pair of heroes. If such an outlook doesn’t kick ass, I might be a Dutchman.

“What the hell are these doing in one movie?” some people might want to know. Now then, the gang of psychopathic outlaw Burt Keller (Gordon Mitchell) has kidnapped a beautiful girl. They want to finance their escape plan to Mexico with her, but their problem is that she’s the daughter of a rich fellow, who’s a bit too eager to pay. Bounty hunter Django thinks this is mighty interesting. Moreover the bandits all have a nice price on their head. And Sartana? Well, in this movie he’s some kind of Robin Hood. When the question is asked why he is such a nice guy, the answer is : “Because he’s Sartana, of course!”

Burt Keller is the main villain and at the same time the most entertaining character. Burt is a gang leader, but if you start analyzing him, you’ll soon ask why all gang members obey his orders. He can’t read nor write, is very short-tempered and plays cards all by himself. That’s not very radical, some may say, but they might change their opinion when you know he’s playing poker with the guy in the mirror. And what’s worse: Burt thinks the guy in the mirror is cheating! This makes him kinda aggressive. And it sure doesn’t help that Django and Sartana are looking for him.

Gordon Mitchell is downright hilarious as Burt Keller. I doubled up with laughter watching him. I also had a lot of fun with the excruciatingly bad fistfights, and (even more so) with all the guys who were shot. Every time a bullet hits its target, the man in question has a completely unnatural, spasmodic and athletic reaction. And what’s more: after his pirouette, every dead man rolls over at least ten times before remaining immobile for ever and ever. Wonderful!

It’s not hard to understand why this movie is a nightmare to many people. But in my opinion, the kind of badness we’re offered here, is the equivalent of higher maths. More: it verges on the brilliance. The soundtrack by first rate composer Lallo Gorri, assembled from a handful of other spaghetti western soundtracks, adds to the atmosphere. And then I haven’t even mentioned the (no less than four) delicious blond girls … There are two kinds of people in this world: those who start looking for this film after reading this review, and those who don’t. Whatever you do, don’t tell me I didn’t warn you that you were in for a very bad treat. 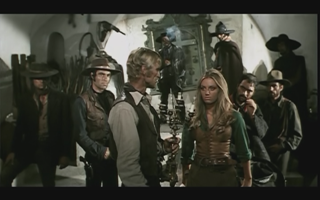 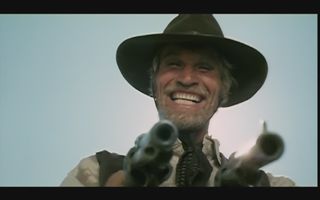 Retrieved from "https://www.spaghetti-western.net/index.php?title=Arrivano_Django_e_Sartana..._è_la_fine/Review&oldid=132251"
Category:
Cookies help us deliver our services. By using our services, you agree to our use of cookies.