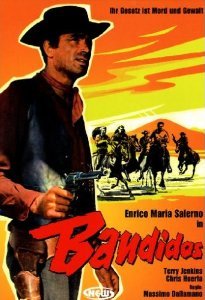 Billy Kane and his gang assault a train and kill all passengers except for one man, Richard Martin, an unusually skilled gunfighter and Billy’s former friend and mentor. Martin is shot through both hands, so he’ll never be able again to use a gun. Martin becomes the proprietor of a travelling circus and trains a young man, Ricky Shot, to become his replacement killer, but the young man has private reasons to get in touch with the ruthless Billy Kane …

Bandidos was directed by Sergio Leone’s former cinematographer Massimo Dallamano, who was replaced, for The Good, the Bad and the Ugly by Tonino delli Colli. Dallamano apparently felt duped by Leone, and his movie is in some aspects an anti-Leone movie, it’s about an older professional obsessed by taking revenge on a former pupil who has deserted and humiliated him. But in trying to be anti-Leone, Dallamano probably comes closer to the maestro than any other director of spaghetti westerns. The West he depicts in Bandidos, is as cruel and broody as the West according to Sergio. Bandidos is a magnificent spaghetti western, beautifully made and suspenseful, with a script that is reminiscent of both a thriller and a Greek drama.

Video: The film is presented in its OAR of 2,35:1. The image has been anamorphically enhanced for widescreen TVs, but it’s quite soft. Colours are strong but in some scenes they look a bit off and there’s some colour bleeding throughout the movie. On a smaller screen the DVD plays quite well, but I guess it will cause major problems when watched on one of those elephantine screens. My disc causes some problems in the second chapter (during the assault on the train): on my DVD recorder the DVD stops playing, on my stand alone player it freezes for a moment and there’s a lot of macro-blocking before it continues playing. Strange thing is there’s no discernable damage, nor are there any greasy fingers. More people have complained about this, so it seems to be a manufacturing error. Overall this is an acceptable transfer, but there’s certainly room for improvement.

Audio & Subtitles: There are three audio tracks, and although they all have the same (for a stereo track rather generous) bitrate of 384 kb/sec, they’re quite different. The German and Italian track are both loud and strong, but the Italian audio sounds more natural, less clinical. The English audio is rather low on volume and sometimes drops to a level where dialogue becomes very hard to follow. There’s also a bit more background noise on the English track. There are optional German subtitles. They are a translation of the Italian language track.

Note: The disc is slightly cut but the (very short) cuts are of minor importance. The Starmedia release (also German) is uncut, but it's not anamorphic, has only German audio and does not respect the OAR. The Japanese disc has a hilarious interview with Venantini.

The Screenshots below are thumbnails. Please click to enlarge.

For a DVD comparison (and some very interesting remarks on this DVD) I refer to Sundance’s site:

Retrieved from "https://www.spaghetti-western.net/index.php?title=Bandidos_DVD_Review_(NEW)&oldid=117103"
Category:
Cookies help us deliver our services. By using our services, you agree to our use of cookies.