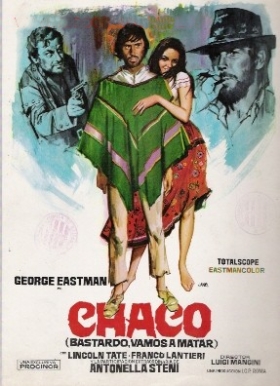 Chaco, a Mexican on the run from just about everyone, is framed for the killing of a couple of Mexican cattlemen. Everyone knows he's innocent but the evidence is substantial. Chaco escapes and with the help of a bounty hunter, goes after the real murderers.

This enjoyable SW is another one which tells a story of two different men who play a cat and mouse game with each other only to become allies in the end against the real baddies. George Eastman and Lincoln Tate are here the contrasting pair in fine playing mood. It was Luigi Mangini's only SW with some input by Sergio Garrone via story and screenplay.