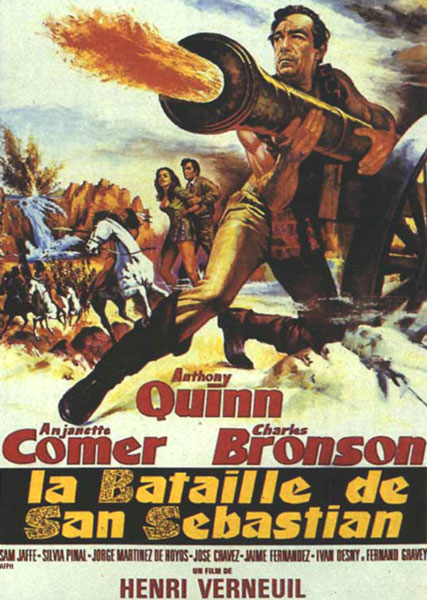 In this French/Italian co-production set in Mexico in 1746, Alastray (Anthony Quinn), a gunman on the run from the law, happens upon a Franciscan priest, Father Joseph (Sam Jaffe), while in flight. Father Joseph shows mercy on the fugitive and allows Alastray to stay with him, but when the locals find out that Joseph is harboring criminals, he's run out of town; Alastray travels with him, disguised as a monk. While approaching what appears to be a deserted village, Father Joseph is killed by a sniper, and Alastray heads into town. He is met by Teclo (Charles Bronson), a half-breed who calls the village home. It seems that a band of savage Yaqui Indians have been terrorizing the town and have a special hatred for men of faith; they intend to continue laying waste to the village until the residents beg for mercy and renounce Christianity. The Village leaders want to make Alastray their new spiritual leader, and despite his great reluctance, he agrees, mostly as a means of maintaining his cover. But when Alastray tries to organize the building of a much needed dam, as well as obtaining a stash of weapons so that the citizens may defend themselves, the Yaquis return in force, leading to a decisive confrontation. Guns for San Sebastian also features Anjanette Comer and Silvia Pinal.