One of the many buddy movies made in the wake of the Trinity movies, with Giuliano Gemma and George Eastman as the uneven couple of friends from the (international) title. The latter also wrote the story and co-wrote the screenplay, using his real name, Luigi Montefiori. The Italian title is one of the oddest ever, meaning: Friend, stay at least a palm’s width away from me. Gemma is the witty and charming half of the couple, but he’s accompanied by a buddy who’s not grumpy and fat, but grumpy and tall. Some early scenes, of the two having a fistfight in the desert, make clear how tall Eastman really was, and why many other actors didn’t want to act alongside him: Even Gemma, who isn’t exactly small, is dwarfed in his presence.

Originally, Eastman/Montefiori had a different movie in mind, a humorous adventure movie that would take a more tragic turn during the second half, modeled after Butch Cassidy and the Sundance kid. In the finale, both heroes would be killed. He offered the script to Gemma, who liked it very much, but – much to his own surprise – couldn’t find a producer willing to finance it. The success of the Trinity movies, especially the second one (the most successful spaghetti western in history), changed everything. Suddenly it was easy to find producers, but all demanded changes to the script. Montefiori refused to rework his own writings, so Sergio Donati was asked to do it. 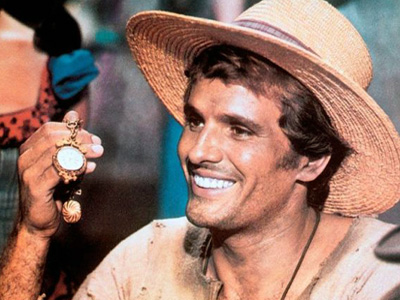 Montefiori was very unhappy with the final result and it shows: he has a few good scenes, but too often his character is merely an on-looker of Gemma’s – all too familiar – antics. It’s hard to imagine how the film would look if all of Montefiori’s intentions had been respected, but it definitely works best in its more thoughtful and serious moments. Gemma’s Ben is dressed like Trinity most of the time, but as a character he is often closer to Billy Boy, the pistolero on the run he played in Giulio Petroni’s And for a Roof a sky full of Stars. He’s a rascal who lives by the day, using his wit and charm to make himself a living, and all seems fine, but every now and then we’re made clear that he’s a man who’s running from himself. In one particular scene he’s confronted with a beautiful woman (Marisa Mell), who turns out to be his former fiancée, left by him at the altar. Like his irresistible smile, her fine clothes can’t hide the bitter truth: she has become a prostitute, he is still a small-time crook, travelling from town to town, performing his cheap tricks.

There are scattered moments of insight or ingenuity throughout, but it definitely is one of those movies that work better in parts than as a whole. The first half feels episodic and needlessly protracted, and while the second half is more variegated, it lacks coherence, both in style and content. There’s also a tendency to overstretch potentially good scenes, notably a ‘display scene’ in the style of For a Few Dollars More, in which various characters show their shooting prowess by shooting holes in increasingly smaller objects. Funny at first, the scene goes on far too long and eventually degenerates into a ridiculous image of one participant shooting in the air, the other catching the bullet with his drinking glass. Instead of building up to a dramatic finale, the second half shifts between the comic and dramatic, alternating would-be funny moments with occasionally pretty violent scenes. The two friends pick up a third partner, a clerk of a bank they rob, and soon they have both a sheriff and his posse and a Pinkerton agent on their trail. And then they make the fatal mistake to team up with three truly dangerous outlaws, who force them into ever more serious criminal activities. There are plans for retiring, but instead they’re spiraling deeper and deeper into trouble. The story has all the characteristics of a Thelma & Louise for boys, but what is bound to happen, never happens, due to the decision to rewrite the original script.

An anticipated sequel never came off the ground. Gemma and Eastman are okay, but it’s more the movie of the supporting actors, notably Vittorio Congia as 'Three Percent', the clerk-turned-bandit, and Luciano Lorcas as the bald-headed villain, one of the meanest-looking bastards in spaghetti western history. There’s a plethora of familiar faces (and places) and referential scenes; in one scene Gemma’s life is saved because the bullet fired at him is stopped by both a pocket watch and a silver dollar ! The movie is very uneven, and not as good as it could have been, but it’s way better than most Trinity clones. It's also immensely helped by Gianni Ferrio’s score and Aristide Massaccesi’s cinematography. Ferrio uses a wide range of styles (from flamenco and jazz to Morricone influenced tunes) to create a very lively, but never obtrusive score, and Massaccesi – most people will know him as Joe D’Amato – makes excellent use of the locations, while many of his compositions and angles are beautifully looking and inventive.

Simon Gelten is a long time contributor to the SWDb. "I'm not as old as Tom B. but I'm working on it. I hope to catch up with him by the end of the next decade.", he says. Simon saw all movies by Sergio Leone and several by Sergio Corbucci in cinema, most of the time in Eindhoven, the city where he was born. Currently, Simon is living in Turnhout, Belgium. Simon is active within the database as both Scherpschutter and his alter ego Tiratore Scelto.
Retrieved from "https://www.spaghetti-western.net/index.php?title=Ben_and_Charlie_Review&oldid=130765"
Category:
Cookies help us deliver our services. By using our services, you agree to our use of cookies.