Between God, the Devil and a Winchester Review

We've had Greek myths retold as spaghetti westerns (Return of Ringo), Shakespearean drama (Johnny Hamlet) and now here is Robert Louis Stevenson's 19th century adventure classic Treasure Island dressed up and repositioned in the badlands of the mexican border with wagons instead of ships and a plethora of bandits instead of pirates. 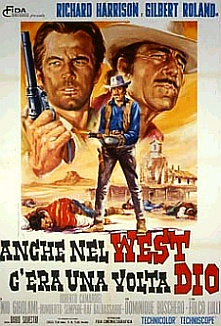 Surprisingly, this genre realignment works reasonably well in terms of setting and personel as the substitutions hold clear parallels with their originals. The desert stands in easily for the sea; its vastness, isolation and danger allow it to offer the same perilous and protracted journey. The bandits are an even easier fit. Swarthy, evil grinning cutthroats brandishing assorted weaponry and consumed by an all consuming lust for gold could be a fitting description for Raf Baldasarre and his cohorts just as easily as it could for a pirate hord. And if there is treasure buried it doesn't really matter where the geography of it is as long as its isolated and hard to get at.

Between God, the Devil and a Winchester manages to cover all these bases and stick reasonably close to the story and themes of Stevenson's original while populating the story with characters just different enough to add something new but similar enough to keep a firm grip on this children's favourite yarn. But therein lies the rub. This is a family adventure film. Something which spaghetti westerns really are not. As a result, although perfectly fine as a sunday afternoon time passer with your youngsters, this is not a film likely to successfully press the buttons of your average (or even not so average) spaghetti fan. For a start the central protagonist is a 10 year old boy and, as has been proved on more than one occasion, this is genre poison. Cute kids and spaghetti don't mix. Except perhaps with a garlic sauce and a nice chianti. Moreover, if the kid is being mentored and cared for by a pacifist priest in civvies with as much edge as a plastic butter knife you are doubly hindered in going anywhere other than syrup city and inevitably this is the destination of this film.

It's no one's fault really. The cast all do a reasonable job. Richard Harrison as the aforementioned plain clothes clergy does what is required of him, Robert Camardiel is reasonable value as the somewhat bizarrely named comic relief Uncle Pink. Even the kid plays his part with relative professionalism. It's just that the subject matter doesn't gel with the spaghetti sensibility and so we are left fundamentally unsatisfied. The problem is clear enough. In the cases cited above where older tales are retold in a western setting the stories were dark and full of gritty themes like revenge, incest, adultery and a loss of place. These are themes which lend themselves perfectly to the spaghetti style as they are the same ones at play in original stories throughout the genre. A bit of gold lust and treachery is all well and good but if it is played too light and tied up with an uplifting moral denouement someting is lost which no end of explosions and shoot outs can fix.

Gilbert Roland's character is a good example of what I mean. Obviously representing the Long John Silver role, Roland has an iron arm instead of a wooden leg but embodies the same mix of charm and baseness of the pirate captain. His charismatic untrustworthiness is a magnet to the boy and, on a surface level, leaves the viewer unsure as to which way he will ultimately turn. All so well and good, but, as a family adventure story with a firm moral position at its heart, it gradually becomes all too obvious which way he will finish up and the sacharine ending when it arrives undermines any pleasure we may have gained from him during the twists and turns of the story. Gilbert Roland always delivers a solid performance and adds a hint of class to anything he appears in. This is just as true here as elsewhere in his career. But solid and classy or not, he cannot inject more into the piece than the plot will allow and his qualities are inevitably undermined.

Ultimately then, this is a misguided film rather than a bad one. Treasure Island retold in the west probably sounded like a good idea when first suggested. A popular classic tale (out of copyright) involving treasure, bandits and double crossing seems to suggest plenty of opportunities for action and drama but, in reality, the idea was misplaced. Mythological or tragic dramas are far better suited to adaptation into this genre than adventure yarns. They are based around human weakness and passions, dark pyschological struggles where violence and revenge find a natural environment.

Of course there are plenty of lighter spaghetti westerns; films which don't delve too deeply into the darker sde of humanity. And some of these are very entertaining. But it's a difficult trick to pull off and I'm afraid Between God, the Devil and a Winchester just isn't special enough to really carry it off. It's not a bad film. It's not even a bad adaptation of Treasure Island. It just isn't good enough to overcome its weaknesses. If you have kids and want something for a rainy afternoon in front of the telly you could do worse. But you could do a lot better too. --Phil H 19:32, 8 July 2008 (UTC)

Retrieved from "https://www.spaghetti-western.net/index.php?title=Between_God,_the_Devil_and_a_Winchester_Review&oldid=43033"
Category:
Cookies help us deliver our services. By using our services, you agree to our use of cookies.