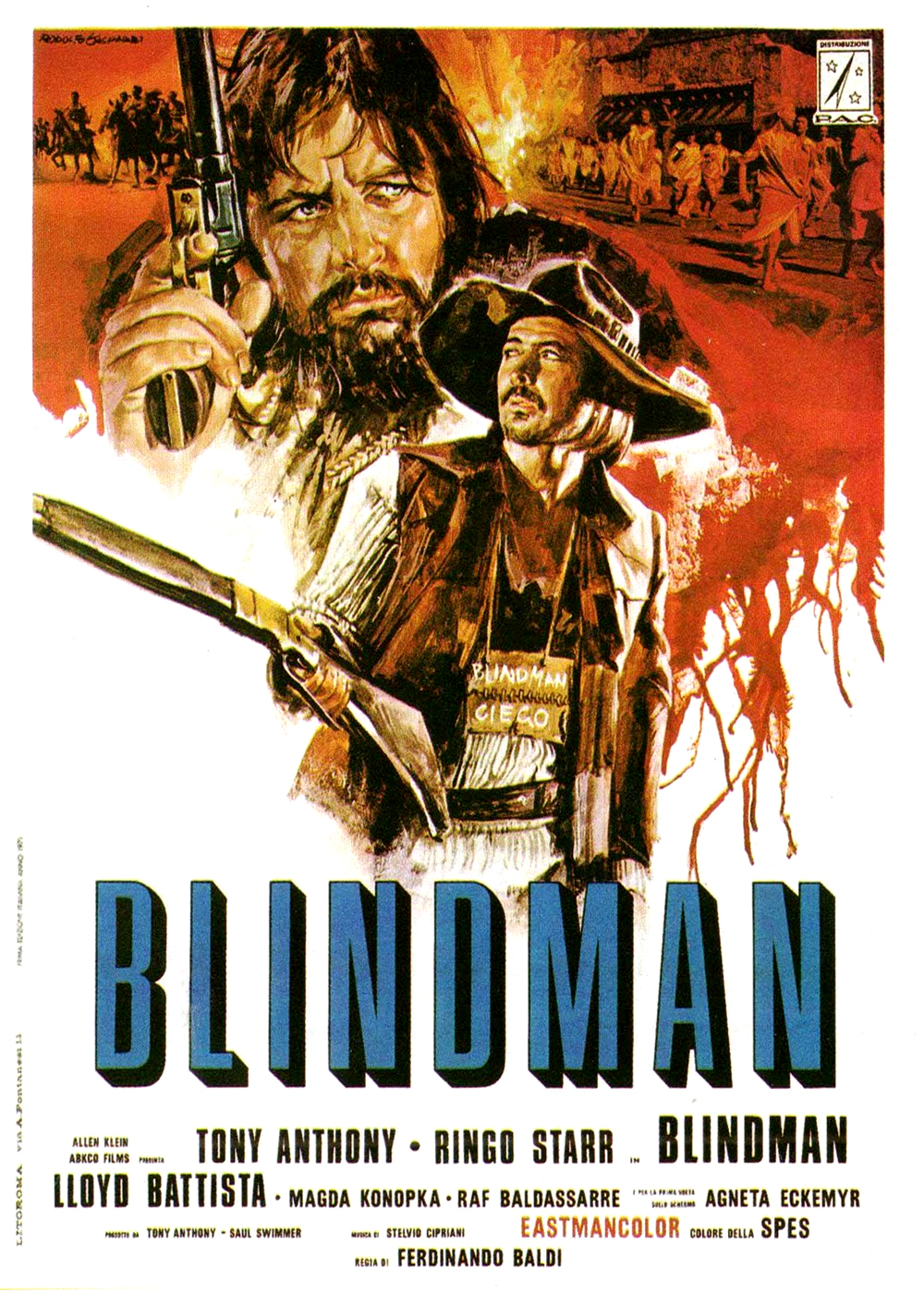 In the cavalcade of oddities the spaghetti western has offered, Blindman is one of the most bizarre, and also one of the most extreme. It assimilates familiar genre clichés, such as the Mexican bandit hooked on a woman who despises him and the handicapped hero who must fight against heavy odds, but also features a sharpshooter who is blind and a Mexican bandit who is played by one of the Beatles. The premise vaguely resembles William Wellman’s Westward the Women (1951), in which a group of ‘marriageable’ women were transported West by a hardened westerner, played by Robert Taylor. In this movie, the man who must escort the mail order brides to mine-workers in Texas, has become a blind, yet lethal specialist, a bizarre idea taken from the Japanese Zato Ichi movies about a blind samurai. Co-Produced by the former impresario of the Beatles, Allan Klein, the film combines elements from pop art and European trash cinema to an excessively violent, perverted concoction that comes very close to a travesty of the genre.

Blindman is double-crossed by his associate called Skunk, who has sold the mail order brides to a Mexican gang. Blindman kills Skunk and the people in his company (he simply blows them up) and then heads for Mexico, to get his fifty women back. The Mexicans, meanwhile, are negotiating with the federal Mexican army about the women. The deal is closed, but subsequently the federales are slaughtered. Not a very smart thing to do, I would say, ant it's not the only implausible detail in the script. I know, the genre has never been concerned with plausibility, but thanks to the visual and narrative bravura of some of its best directors, we were never worried about gunslingers shooting six opponents from the hip, or balancing a pistol on a cross with crushed hands. But Baldi makes his blind gunman slowly groping his way and fumble about for things, and for most part of the movie I felt sorry for the guy, who would never have any chance in the dangerous profession he had chosen. Having read that the lenses Anthony had to wear for the occasion were hurting him badly, I thought for a moment that he really had gone blind.

The more traditional genre elements like shootouts and torture scenes are handled rather well in Blindman, and there’s a nice scene in which bandit leader Batista asks the priest to marry his dead brother with the girl he loved madly when he was alive. Some ideas are easy to enjoy. Blindman is guided by a intelligent seeing-horse (maybe a reference to Jolly Jumper, the horse of Lucky Luke, who beats his master at chess), and the Mexican gang is run by three family members, two brothers (one smart, one stupid) and a sister, who is called Sweet Mama, who outdoes her brothers in sheer sadism. The fact that the stupid brother is played by Ringo Starr, surely adds to the fun. But some of action is so far over the top, that even a tongue-in-cheek approach doesn’t really help. The slaughter of the federales is of an outrageous brutality, and the violence directed at women is of a particularly nasty kind, especially during a protracted scene in which the mail order brides are chased through a desert landscape and most of them shot. This kind of misogynist, exploitative violence may work in trash cinema, but here it feels like a hardcore scene in the middle of major Hollywood production.

The unusual combination which sets Blindman apart within the genre, doesn’t work for me. But I am defending a minority standpoint: many genre fans think this is a minor classic and some of them even call it a personal favorite. In defense of the film it must be said that it’s beautifully shot and well-acted. Tony Anthony may be a little piteous, but if you’re playing a blind person who is nearly constantly threatened and tortured, that can be called an achievement too. Ringo Starr is billed second - for obvious reasons - although he only has a minor part as the stupid Mexican bandit called Candy (if you have a Skunk you might as well have a Candy too). Ringo wasn’t the best drummer in the world, according to Paul McCartney not even the best drummer of The Beatles, but directors who had worked with them, always said he was the best actor of the Fab Four. In Blindman he isn’t bad. Batista and the luscious Konopka give good performances as, respectively, his wiser brother and perverted sister, and spaghetti western regular Baldassare – nearly unrecognizable for the occasion – is fun to watch as the ever laughing general of the federal army. Stelvio Cipriani’s music is fine too.

Simon Gelten is a long time contributor to the SWDb. "I'm not as old as Tom B. but I'm working on it. I hope to catch up with him by the end of the next decade.", he says. Simon saw all movies by Sergio Leone and several by Sergio Corbucci in cinema, most of the time in Eindhoven, the city where he was born. Currently, Simon is living in Turnhout, Belgium. Simon is active within the database as both Scherpschutter and his alter ego Tiratore Scelto.
Retrieved from "https://www.spaghetti-western.net/index.php?title=Blindman_Review_(Scherpschutter)&oldid=131424"
Category:
Cookies help us deliver our services. By using our services, you agree to our use of cookies.