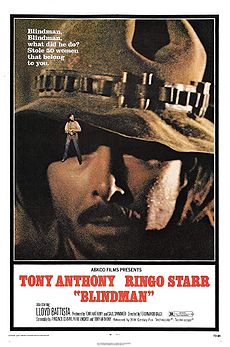 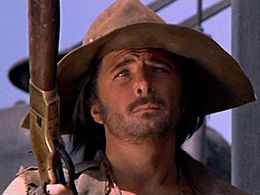 Any film which has this line as a recurring statement from its central protagonist is going to earn itself some brownie points from me before it even starts and the fact that it also pretty much sums up the entire plot of the film in five words makes the job of a reviewer all the easier. It is a line which Tony Anthony (as the eponymous Blindman) repeats to every character he encounters who stands between him and the half century of females who have been taken from him and, for a man with no sight, he shows admirable focus on this issue throughout.

Aided only by his seeing eye horse (a seemingly ludicrous idea that works surprisingly well) and a winchester complete with fixed bayonet Blindman goes in pursuit of the aforementioned women who he has been contracted to deliver as mail order brides to a mining settlement. As the story continues he shows himself to be very resourceful in this quest and yet surprisingly trusting considering that his original partner, Skunk, has already double crossed him and passed on the women to evil bandit Domingo (Lloyd Battista) and his equally nasty siblings Candy (Ringo Starr) and Sweet Mama (Magda Konopka). Domingo, in turn, tricks him into releasing Candy from capture by substituting 50 old women for the new brides while, later, the Mexican General he befriends (Raf Baldassarre) swindles him out of the women again by gagging them all to keep them quiet. Why on earth anyone would trust a character played by Raf Baldassarre with anything, let alone 50 women, is beyond explaination. 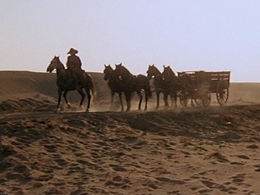 Tony Anthony is clearly the lead here but this film was largely financed as a vehicle for Ringo Starr (fresh from the break up of the Beatles) to try out his acting muscles. Allen Klein, business manager of the Beatles at the time of their break up was the money behind Blindman (as well as three other spaghettis starring Tony Anthony) and this outing was put together by him with Ringo in mind. As a result, despite his having strictly a supporting role in the film, it is Mr Starr who shares top billing with Anthony rather than Lloyd Battista who has the far bigger part. Ringo went on to make some very good appearances in films, most notably in That'll Be The Day where he played a Liverpudlian fairground Teddy Boy. In truth, that part was perfect for the likeable ex drummer while playing a mexican bandit was probably a little out of his range. He certainly looks the part alright, with his long lanky hair and beard, but somehow he never quite convinces and it is just as well that, despite his billing, the film never really depends on his performance. No, what stays in the mind with this film, over and above the novelty value of the blind protagonist and the ex Beatle, are the women. And, more to the point, the way they are depicted.

For a film with fifty women at its heart you might expect a central role for at least one of them. But the truth is that apart from Sweet Mama and Pilar (a local girl who is helped by Blindman) the females are here strictly as objects of man's desire; both within the text of the film itself and amongst the target audience. 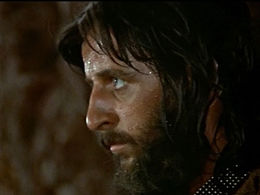 The fact is that Blindman is very much a film of its time and 1971 was a time when the boundaries of censorship in regard to nudity on screen were being drastically relaxed for the first time. As a result, film makers in europe and the U.S. were very much pushing those boundaries whenever possible and no chance of a bare pair of breasts being shown, in whatever context, was allowed to pass by. And with 50 women hanging around the set of Blindman the result was fairly predictable. There are more naked women on show here than in the municipal baths changing rooms after an aquarobics class. Dresses are torn, bodices are ripped and at one point all 50 of them stand around naked in a laundry being slooshed down with buckets!

So, strictly one for the boys I'm afraid in that regard. But it would be unfair to judge the whole film by its shortcomings (or highlights, depending on your point of view) in one area and especially as these were pretty typical of its time. In fact, let's be honest, the Spaghetti Western genre as a whole is not exactly a hotbed of feminist ideology. No, the better question would be, does the film stand up well enough for what it is? And the answer to that question is clearly, yes, it does. 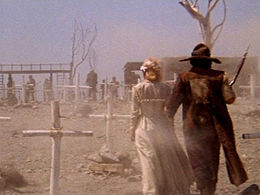 Baldi's direction is to his usual solid if not exceptional standards. The score from Cipriani is good and fitting of the general feel of the film. The cast play their roles uniformly well and there is just the right level of irony and tongue placed firmly in cheek to a lot of the proceedings while never stepping over the line into outright comedy which would definitely have been a mistake. Rather the dominant tone is gritty and rather brutal (if a little indulgant) and the viewer has plenty to enjoy from start to finish.

Indeed, it was strong enough to have spawned a sequel and the suggestion that one was planned is evident by the nature of the film's ending. However, apparently the contact lenses worn by Tony Anthony to give him his sightless eyes appearance caused him so much discomfort (even weeks after shooting was completed) that he flatly refused to do it. A pity. I for one would have gladly sat through another installment of this. 50 naked women or not.

Retrieved from "https://www.spaghetti-western.net/index.php?title=Blindman_review&oldid=97827"
Category:
Cookies help us deliver our services. By using our services, you agree to our use of cookies.