Review of Blood Calls to Blood (1969) aka Sangue chiama sangue 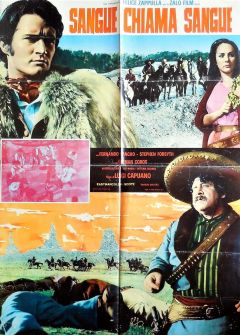 Luigi Capuano's 1968 outing, Blood Calls to Blood, starts out with a lot of merriment and dancing in a saloon, so much that you might think you're about to watch a comedy western. Thankfully, it wasn't. It was a decent, solid, action-packed effort, though. Stephen Forsyth stars as Andrew (or "Angel", depending on what print you see), who rides into town in that typical way, and we start to suspect he's looking for something. The same town also has a bandito gang led by a guy named Sancho, played by (who else?) Fernando Sancho. Through some whisperings, we come to learn that there's something nefarious in the works. 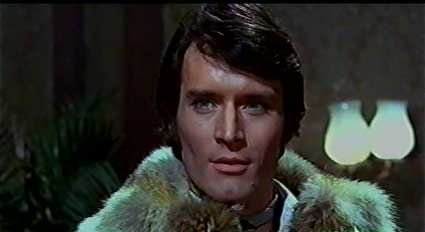 Andrew has a brother, a friar who is heading to a local sanctuary, the same sanctuary that oddly has a Virgin Mary statue that wears a big diamond tiara. Sancho's gang busts in and ruthlessly murders all of the friars (in a rather violent, and almost disturbing sequence), and Andrew swears his revenge, not knowing who did the deed. To complicate matters even more, he's sleeping with Sancho's gal, Carmen, who seems to have a knack for decieving everyone she comes in contact with. We also learn why Andrew is in town, as he wants the diamonds, too. Eventually, after a few interesting double-crosses, Andrew has it out with Sancho, who he disposes of in a rather un-spaghettilike fashion. 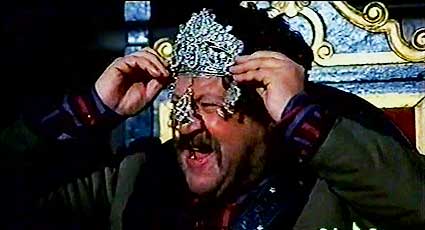 Fernando Sancho, the playful slob of a bandito that you love to hate.

Although by no means an exceptional film, there are a few things that made it work for me. It's very well-paced for one thing, it moves along well, and even though it wasn't the most intricate or original story, it kept me interested. Sancho does his bandito thing, as usual, and like most times, he's always fun to watch. Forsyth was a bit miscast; he's a bit too clean-cut for this kind of role, looking more like a model than the stranger-in-town archetype. The other thing I noticed in this film were these little, unexpected bursts of dramatic beauty, such as when Andrew's brother, Lewis, who has recently become a friar, is suprised by Andrew asking him for a blessing. Before he makes the sign of the cross, he looks at his fingers, as though he is in awe of some newly-acquired power. At the end, when the feisty merchant Maryanne goes to the sanctuary to make things right, we hear a powerful, heavy pipe organ playing in the background as she slowly completes her ritual, and it was an incredibly powerful scene, not to common in a run-of the-mill spaghetti like this one. Francesco de Masi's soundtrack is pretty typical, and at times, it's a bit overdone with the silly music, making scenes have a comedy feel that really shouldn't.

I don't know if this is available on a release somewhere; the print I saw was recorded off of Italian television. Nevertheless, it's a decent, average genre piece, worth a watch if you come across it.

Retrieved from "https://www.spaghetti-western.net/index.php?title=Blood_Calls_to_Blood_Review_(by_J.D.)&oldid=132603"
Category:
Cookies help us deliver our services. By using our services, you agree to our use of cookies.