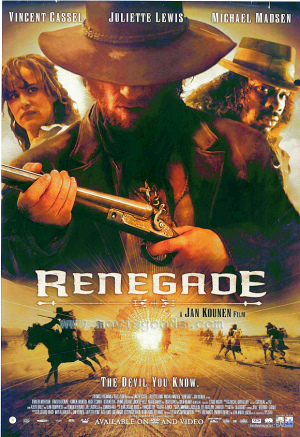 From Jan Kounen, the French director of the violent cult actioner Dobermann, comes this loose adaptation of Jean "Mobius" Giraud's comic series Blueberry. Vincent Cassel stars as Mike Blueberry, a lawman whose past comes back to haunt him when his town is invaded by the nefarious Blount (Michael Madsen), the man responsible for his first love's murder. Led by a German con man by the name of Prosit (an unrecognizable Eddie Izzard), Blount and his crew search for an ancient treasure buried deep within Indian tribal grounds, while Blueberry and his Indian friend Runi (Temuera Morrison) race to keep the land sacred and stop the thieves by any means possible. Featuring Juliette Lewis and her father, Geoffrey Lewis, in supporting roles, the film sports a solid American cast that boasts an additional performance by Colm Meaney and a rare appearance by none other than Ernest Borgnine.

Jan Kounen's Blueberry is a gorgeously shot metaphysical mind trip that will undoubtedly lose those looking for a conventional Western, but will find a home with fans who find joy in confused flicks that delight in their whacked-out madness. It makes sense that the director changed the course of the film midway through production after diving headfirst into shamanism, since it's about halfway through where the flick takes a belly flop into a psychedelic drug fest filled with CGI insects and mystic mumbo-jumbo that puts Oliver Stone's The Doors to shame. That said, the flick is expertly filmed and done in such a cinematic way that it's hard to knock the entire package. The performances are exceptional as well, filled with familiar faces that lend the production immediate class and make for a casting agent's dream. It's too bad, then, that it all falls apart by the anti-climactic ending that delivers on a gonzo level but falls desperately short of the kind of satisfactory wrap-up that one would expect going into it. By the time Vincent Cassel and a very naked Juliette Lewis go for a sensationalistic swim at the end, you're left wondering just what the point was. Recommended for fans of wild peyote trips and avant-garde Westerns -- both of which are probably sadly lacking these days.