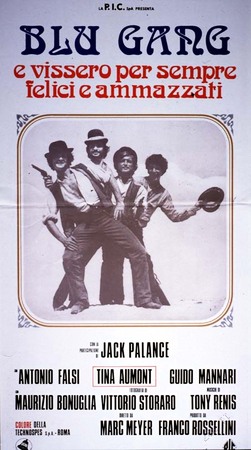 Cane, Johnny, and Frank Blue are outlaw brothers. They rob, kill, and womanize. The many scrapes they participate in often separate the boys. They soon run into even more trouble after a large posse starts trailing them. But even worse, the posse is accompanied by a mysterious hitman.

The film's main point of interest is its style of Western film-making. By the 70's, most of the American Westerns had become what is now called Revisionist Westerns (ex: Pat Garrett and Billy the Kid, Dirty Little Billy, McCabe & Mrs.Miller, etc.). Westerns that were far more "realistic" and violent than the previous, mythmaking westerns of say John Wayne. They demytholigized the West and Western. Many of the Twilight Spaghettis can be called Revisionist.

But Blue is probably the first Revisionist Spaghetti since the style had been solidified. It also features many early traces of the Twilights, it could even possibly be considered the first Twilight. Anyway, the Revisionist style is a very interesting aspect of this film. It has a very large scope and seems very ambitious. Its characters are presented as legendary and their travels and such are filmed in a black and white montage similar to Butch Cassidy and the Sundance Kid. (A film that obviously influences Brothers Blue). And this balladic approach to the characters is very engaging. But herein lie some problems.

The characters are what the film is all about and at least one gang member is in every scene for the film's runtime it seems. But they can get annoying. And overall, they are just not interesting enough to drive the whole film. Even worse is that the romantic subplot is a bit tedious as Tina Aumont has never been too likeable. Her characters are the type that need to be slapped.

Beyond the weak characters, the Revisionist style is of the more basic variety. We get long scenes that show how happy they are together accompanied by a folk ballad. But these scenes get very cheesy. In short, the style often turns into a self parody of sorts, that are often too beautiful for their own good. 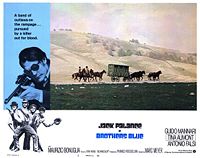 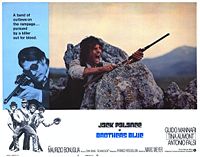 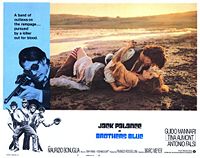 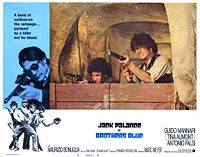 Beyond the style, Brothers Blue has another claim to fame in the Spaghetti Western community. It is one of, if not, probably the best photographed Spaghetti ever! No surprise once you learn that Vittorio Storaro, Italy's John Alton, was behind the camera. He plays around a lot with his colors and films many beautiful scenes, especially in saloons, with the vibrant colors and often expressionist look to the underlit rooms. One scene in a jail is beautifully played out to a single beam of light from the outside. And many outdoor scenes are beautifully filmed. Beyond the colors, he often switches between color and Black and White to sort of add the mythical side to the Brother's story. Similar to My name is Nobody and the History book montage. One scene feels like it was shot by John Alton in a German Expressionist way. Anyway, the photography is magnificent.

Yet another bonus is Tony Renis's award winning soundtrack. Composed of a lot of Folk Ballads which fit the Revisionist tone. They don't narrate the film as far as I remember. But they're maybe played a bit too often. The montage is scored to a sort of pop song beat which is very goofy.

The acting is pretty good but nothing special. Guido Mannari seems to fit his role and does a suitable job at that. But whoever plays the littlest brother is very annoying and his frequent bathroom visits never get funny. Jack Palance is completely wasted in his role. His only line of dialogue is something like 5 short words. They're not memorable. He's barely ever on screen and it's an unbelievable shame his character was never developed.

Bazzoni keeps the pace up for the most part but there are a few boring moments that serve little purpose than to build up the legend of the characters. But his ideas are admirable and he seems to be interested in this picture.

All in all not one of the better experiments but noteworthy and interesting.