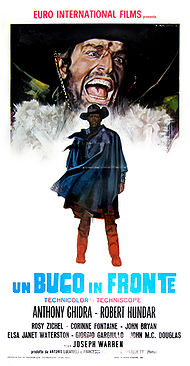 In the days of the Alamo, a treasure was stolen by three soldiers of the army of Santa Anna and hidden in a secret place. When combined, the information written on three playing cards will reveal the location of the treasure. Those playing cards are in possession of a deserter who calls himself ‘general’, Morienda, a drifter, and Garrincha, an outlaw. Morienda has made an appointment with the famous gunman Bill Blood in a monastery, but at his arrival he is severely wounded and can only hand over his card and utter a few words. Blood infiltrates the gang of Munguya but is exposed by the bandit and beaten up. In the meantime Garrincha sets up a trap for Munguya with the help of a double-crossing arms-dealer. The three men finally meet at the monastery where the treasure is hidden.

This is a well-made genre entry, relying more on atmosphere than action. Combining elements from both The Good, the Bad and the Ugly and A Fistful of Dollars, it might feel a bit predictable, but it has the right ingredients for an enjoyable pizza pasta dish. A great score and good performances by Ghidra and Hundar add to the fun. The film is partly shot in the Grotte di Salone, an archeological area in Lazio, often used (more than half a decade earlier) for peplum movies. The excellent use of this location, gives the film a distinctive look among the spaghetti westerns. – Scherpschutter

Well directed SW which was made on a shoestring budget with liberal use of the Italian sandpit locations, but director Vari nevertheless succeeds in giving it an interesting look. The beginning, set in a monastery, is especially good, and this is of course another one of the too few SWs which have benefited from the charismatic Anthony Ghidra in the lead.